The Man Who Invented Louisiana Swordfishing

Wresting a broadbill from 1,200 feet deep takes savvy, stamina, and an all-consuming passion that, for Captain Peace Marvel, never gets old. 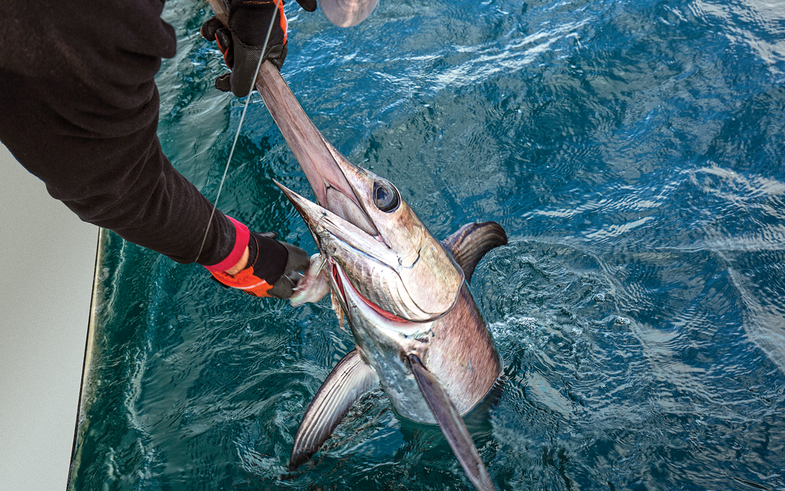 According to Webster’s, a pioneer is a person or group that originates or helps open up a new line of thought or activity or a new method or technical development; one of the first to settle in a territory.

Fishing lore is replete with accounts of pioneers. Zane Grey’s Tales of the Angler’s Eldorado, New Zealand helped establish the Bay of Islands as a premier gamefishing area. After revolutionizing dry-fly fishing for Atlantic salmon, Lee Wulff moved on to sportfishing for giant bluefin tuna off Newfoundland and twice set world records. Hemingway explored Bimini, and a world of anglers followed him to the flats.

Today, true fishing pioneers have mostly faded to black, taking a backseat to “high-fivers”—outdoor show superstars. Perhaps that’s why we treasure the Leftys, Chicos, Stus, Flips, Rolands, and Shaws as much as we do, while deeply mourning the losses of the Lees and Joans, Joses and Dougs.

To actually fish with a pioneer is rare. You might be able to do it in Islamorada, Florida, aboard one of Richard Stanzcyck’s boats, or perhaps in Louisiana if you book a trip with a captain with a name as quirky as his persona—Peace Marvel. Witness his ritual of beginning each day with a prayer.

“Dear Lord,” says Marvel, his head bowed in reflection, “please forgive these gentlemen for the slaughter that they are about to commit.”

Before the “amens” can be articulated, throttles are punched full, hurtling captain and crew toward the Gulf of Mexico’s Mississippi River Canyon a couple of hours distant and 200 fathoms deep.

“Pioneer?” says Marvel’s former charterboat partner Devlin Roussel with a laugh. “The guy belongs in the fishing hall of fame—he truly does. How many guys can you name who have created a viable commercial sportfishing business for an entire region? Well, Peace has done it—twice: first for yellowfin tuna in southern Louisiana and now for swordfish.”

Certainly, no one sets out to be a fishing pioneer. Instead, the transformation is fueled by wanderlust—a need to roam, explore, and learn—no different from a youngster in search of brook-trout nirvana in some far-off wilderness stream.

“Back in 2003, I read a story about swordfishing out of Florida and wondered why no one caught any swords out of Louisiana,” says Marvel. “I began checking records and found that a couple may had been taken, but it’d been a long time since the last recorded catch. I decided to change that.”

After poring over bathymetric charts of the Mississippi River Canyon, Marvel, Roussel, and crew took a shot in the dark, fishing the depths of the Gulf at night in search of swordfish. After a couple of break-offs on their first trip, they managed a 30-pound sword—the first-known recreationally caught sword out of Louisiana in two decades. That first voyage fueled a fanaticism for swordfishing that continues until today, though you’re now less likely to find the PeaceKeeper on the water at night—­traditionally the best time to catch these nocturnal feeders. If a trait common among pioneers is an endless search for new challenges, Marvel is all-in.

“Well, after a while I had pretty much figured out the nighttime thing,” Marvel says. “The guys in Florida [Rich Stanczyck and Bouncer Smith] were beginning to do well with daylight swords, so I needed to get that figured out, too.”

Marvel traded his multiple, near-surface bait spread for a single, meticulously rigged squid that he’d use to bump along the crag-filled sea bed more than 1,000 feet below the boat. While nighttime swords feed high in the water column, daytime swords loaf near the bottom.

You can sing Tom Petty’s “Free Falling” from start to finish in the time it takes a 5-pound hunk of steel tethered to a rigged squid bait to hit pay dirt in the Mississippi River Canyon.

“Once it finally gets there, you need to break off the sinker by reefing hard on the rod,” says Marvel. “Not being able to break it off is where the sucking gets real bad. Then you’ve got to reel up a length of line—with 5 pounds of weight attached—that measures as high as the Empire State Building before starting all over again. After that, it’s all about playing the current, plotting the drift, watching the chart recorder, and literally inching a bait up and down the peaks and valleys of one of the world’s deepest canyons. It’s hard, but then again simple. The bastards are down there—we’ve just got to make them eat.”

While one would think that a fish that can grow to 1,000 pounds would somehow eat aggressively, swordie bites are more bluegill than blue marlin.

“He’ll usually bill the bait first,” Marvel says. “He’ll play with it, tap it a few times before he sucks it up.”

Once a sword is hooked, the marathon begins—no two fish ever fight the same.

“You can sometimes whip a good fish in 30 minutes, but others will take you a few hours,” he says. “We once had a fish on that we couldn’t budge at all. Best we could figure is that he buried his sword in the bottom to stop from being reeled up. We never did get him.”

But Peace Marvel and crew have leadered many a swordfish since that obstinate mud bogger broke off a couple of years ago—81 from May 20 to December 10 last year. Much of the Venice charterboat fleet has now joined in the challenge, but that’s the cost of being a pioneer. So what’s next?

“I want to catch a damn sturgeon,” Marvel says. “They’re in the Mississippi River. I’ll get them figured out, too.”