A Bucketlist Tuna Trip at an Attainable Price

Once the blue-collar banter about lawn mower and chainsaw repairs subsides in Billy White’s shop at New Boston Crane, Service... 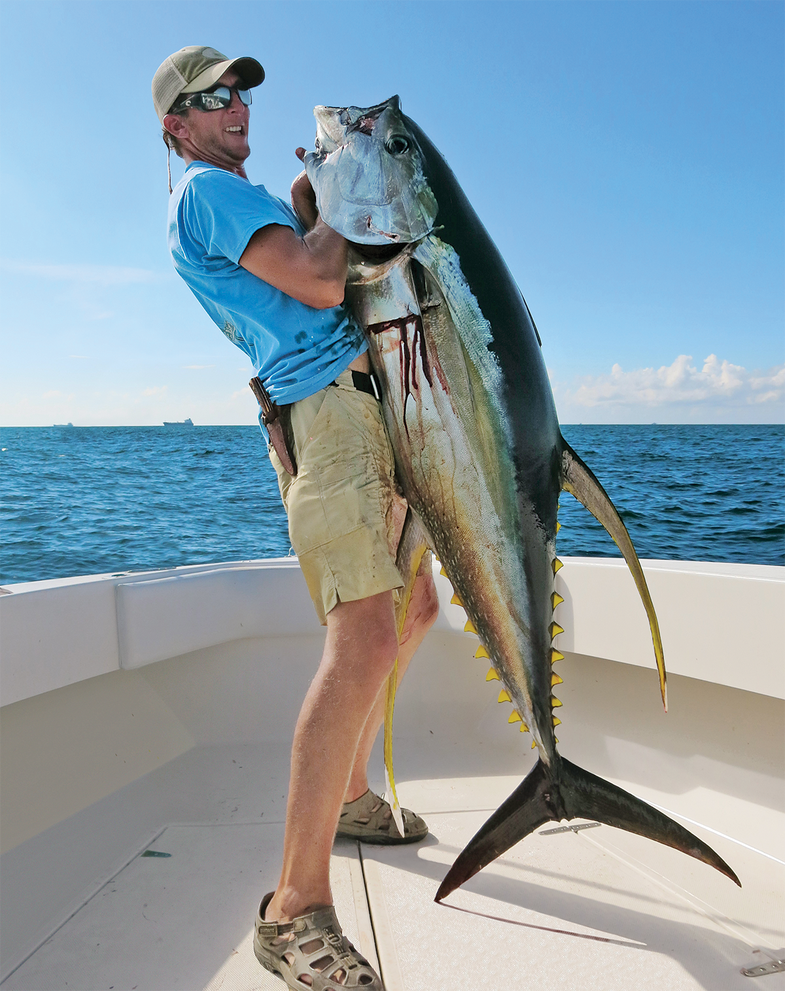 Once the blue-collar banter about lawn mower and chainsaw repairs subsides in Billy White’s shop at New Boston Crane, Service and Sleds in western Massachusetts, the serious talk begins. And it almost always shifts to fishing and hunting. Lately it’s been about White’s Western elk hunt last fall.

“So, all in,” someone asks, “What’d it cost: license, hunt, airfare, taxidermy—the whole deal?”

“Probably around eight grand,” says the 40-year-old White. “I hate that damn bucket-list idea, but I guess that’s what it was.” With two mortgages, a three-year-old who will one day go to college, and a shop full of new and broken lawn mowers, ATVs, and snowmobiles, White has a lot of overhead. White is also crazy about hunting and fishing. Next on his list?

“Tuna, bro,” he says. “I just want to have one really awesome day on tuna—yellowfin, giant bluefin like on that Wicked Tuna show, it doesn’t really matter. I just want to get hooked up and take home three coolers of freaking fillets.”

Doing the Math
Let’s start with the bad news. Whether you live near the brine in the Northeast, Florida, near the Gulf of Mexico, or on the Left Coast, tuna fishing is not cheap. Unless you intend to use your own boat, you’ll spend upwards of $2,000 for a charter.

That’s a ton of money for anyone. But before you fire up the nasty-grams about highlighting trips that are unattainable for the common man, consider that you can split that cost with five of your buddies—offshore boats are also known as “six packs.” So you’re down to $350 or so per person.

“Hey, think of it as 18 times 80 times $20,” says former Louisiana charterboat captain Devlin Roussel. “Down here, a six-man limit of yellowfin tuna is 18. The average weight per fish in the fall is 80 pounds—but you can get fish up to 200 pounds in October. Market value of ahi [yellowfin] tuna is right around $20 per pound. Well, that adds up to a heck of a lot more than $2,000. No one sells their catch [it’s illegal in Louisiana], and even six guys in great shape couldn’t withstand catching 18 yellowfin if the fishing was ridiculously good, but on a good fishing day, you’ve got a pile of fish to take home.”

Tougher Than the Rest
Whether you prefer your tuna raw or on the barbecue, the eating part of tuna fishing is just a small part of their attraction.

“They’ll test your mettle each and every time,” says Roussel, “both mentally and physically. They fight to the death, but you have to study them first to get them on the hook.”

Indeed, on some days and in some situations, they can be chunked to the hook with a piece of cut bait. On other days, they’ll shun the chunk in favor of specific livies (various species of small live baits). At still other times, they’ll blow up only on splash bars or furiously retrieved popping lures.

But the fact that a big tuna can yank almost any stand-up fisherman (no fighting chair) overboard is part of the fish’s appeal. Whipping a tuna takes equal parts brute force and technique.

Filling Your Bucket
Tuna fishing kicks off in earnest in the summer—and can be pretty good then—but fall is the best season for big fish. In the Northeast from Maine to New Jersey, recreational boaters and offshore charters make 100-mile-and-more runs to target bluefin, yellowfin, and bigeyes, with giant bluefin garnering much of the attention as they begin to migrate south to winter spawning grounds. Giants from 200 to 1,500 pounds—think Wicked Tuna—are the Boone and Crockett whitetails of the offshore set. Know, too, that giant bluefin tuna numbers have been declining and their harvest is highly regulated by the National Oceanic and Atmospheric Administration (NOAA). Further, if you’re lucky enough to hook into a giant and get it into the boat, you should know going in that it’s not likely that you’ll get to eat it. Most charterboat skippers will sell the fish and, depending on your signed agreement, give you a percentage of the price he gets for it.

An alternative is an open-boat tuna fishing trip. Several New Jersey party boats (voyagerfishing .com, canyontuna.com) offer 20- to 30-hour offshore sails through the fall for about $500. Reservations are required.

The Outer Banks of North Carolina become a hotbed of tuna fishing beginning in October and continuing through much of the winter, with both blue and yellowfin in a bounty that can include wahoo as well. The run to the Gulf Stream (the offshore warm-water current) is only 30 to 60 miles, and the fishing can be outstanding.

Amid all the tuna fishing promise of fall, there stands one location that is as close to a fishing layup as any place in the country, and perhaps even the world: Louisiana. Here, huge sickle-finned yellowfin are king. And in October, it seems as if 100- to 150-pounders get flopped on the docks at Venice Marina with unmatched constancy.

“This is it, bro,” he says. “This is what I do and where I do it. There’s absolutely nothing like catching tuna. They are just badasses. Every one of them.”

Billy White may live hundreds of miles from Venice, Louisiana, but he couldn’t agree more.

“Done deal,” he says. “I’m totally in. I just ordered the coolers.”