When we saw the soles of Elaine Ahn’s boat shoes, we knew she was headed overboard. The big yellowfin tuna... 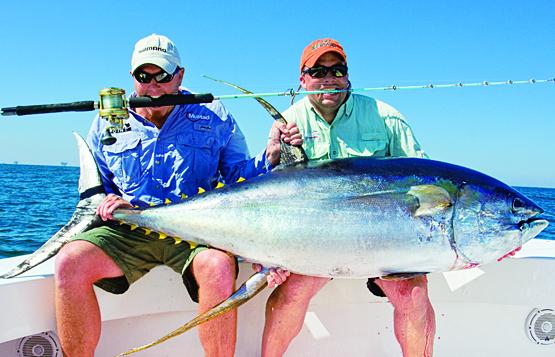 When we saw the soles of Elaine Ahn’s boat shoes, we knew she was headed overboard. The big yellowfin tuna at the end of her line was on a run, threatening to take Ahn, tied to the fish via a fish-fighting harness, along with it. Death by tuna is not a great way to go. Her rod tip was buried three guides deep into the Gulf of Mexico by the time Capt. Devlin Roussel and I grabbed hold of her, pulling her back aboard. No one was laughing.

It might sound a bit bizarre, but the fact that a big tuna can yank most any stand-up fisherman overboard is part of the fish’s appeal. Save for the billfish, nothing makes an angler’s heart beat faster than the mere prospect of catching a tuna. Schoolie black or bluefin are fine, but in the fall, from coastal New England to the Gulf, huge yellowfin and giant bluefin garner much of the attention. But know that whipping a tuna takes equal parts brute force and technique.

The Hookset
▶ Tuna are not largemouth bass. An exaggerated hookset is unnecessary–the fish will hook itself. Get to the reel quickly, allow the fish to run with the bait for 3 to 5 seconds, then shift it into the strike position.

Tight Makes Right
▶ Constant tension is critical to winning a tuna fight. Yellowfin, bluefin, and bigeyes are all powerful battlers capable of hard runs, particularly when first hooked. Hour-long tugs of war are common. Be prepared for anything. Transfer the rod from the rod holder to a fighting harness, square up to the gunwale, keeping the rod perpendicular to the boat, and plant those knees into the combing pads. If the line goes slack, reel as fast as you can.

Going Deep
▶ It’s virtually impossible to brake a fish that’s charging straight away from the boat, so don’t even try. When the tuna eventually does stop, reel hard to keep the stalemates to a minimum–line should be either coming into the reel or leaving the reel at all times. If the fish sounds and seems to be brooding in the depths, you’re on the losing side of the argument and simply allowing more time for the hook to work its way free. Typically, the fish will have a couple of strong runs in it before heading for the bottom, which is where the real fun–and battle of wills–begins. The key words now are: lift and reel, lift and reel, lift and reel. Say it out loud if necessary. There will be times when the fish will giveth and then taketh back again, but be confident that once it starts circling deep, the fight is drawing to a close. Proper form is important. Always stay square to the fish with your knees pointed right at him.

Be “Color” Blind
▶ “I got color.” The captain or crew will likely be the first to spot the fish swimming in circles below the boat and shout those words, but it’s incumbent upon the angler to pay little attention. Many tuna fights end in agony at boatside because of a letdown of a mere second or two.

Upon seeing the boat, the fish will normally make its final run for freedom. The line and the connections–and everyone aboard–have been stressed. Try to stay focused. If you allow the line to make contact with the prop or underside of the boat, it will have all been for naught. Make the call for the gaff and guide the fish to the hook. Stay on the rod until the fish is safely onboard and shift the reel into free spool only when the deckhands have it under control.