How to Kill Your Dog? 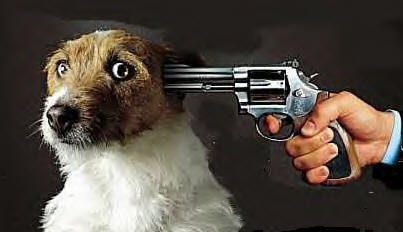 When to put an ailing or geriatric dog down is a very personal decision dictated by many circumstances; the over-arching of which should be the quality of life of the animal. How you decide to end the dog’s life is just as personal, if not more so. My question to you is: Could you shoot your own dog?

I ask this question after talking with a friend who did just that. He has known the time was coming; that his dog would only suffer through another winter if he didn’t put her down. So, last week he dug a deep grave on the hillside behind his house, packed the dog onto the four wheeler (because she couldn’t make the walk), took her up to the site and shot her through the chest. He buried her and when the kids came home from school he told them she had died that day. Taking the two youngsters up to the grave, they said their goodbyes and placed a cross as a marker. The boys cried. My friend did too.

For many reading this, the way he ended his dog’s life might sound harsh, but you can’t say he was a bad or cruel pet owner. He rescued the dog from the pound more than 15 years ago and gave it a good life running and hunting in the country. She had been with him from almost the day he returned home from college, had been by his side when the inevitable break-up with the college girlfriend came and was there when he met, married and had two little boys with his wife.

I’ll be honest. There’s no way I could ever shoot Kona. When my friend and I were discussing his inevitable task at hand this summer and I told him that I would have to have a vet do it, he looked at me and said:

“She’s my dog. Why would I have someone else kill her?”

He said it with respect and honesty. He was trying to tell me that after 15 years together and all they had been through, he owed it to her to be the one. Why should he shirk from that duty?

It made me stop and think about the situation. There’s no way I could do it, but the way he put it made my initial incredulousness seem very sanctimonious. Who am I to judge how a man goes about ending his dog’s life? He was clearly affected by the act and loved the dog. In the end he found what we all seek: closure and a positive feeling of doing the right thing by ending the dog’s life, as well as the manner in which it was carried out; she didn’t suffer, he was the one to do it, their memories remained and she wouldn’t face another crippling winter.

I’d just like to know what everyone out there thinks about a man shooting his own dog when the time comes to put it down. Could you do it? Or would you, like me, have to take it to the vet and pay someone else to do it for you?