*OL.com Exclusive: The complete version of “Teach Him Right” from the March issue of Outdoor Life* Waiting until two weeks... 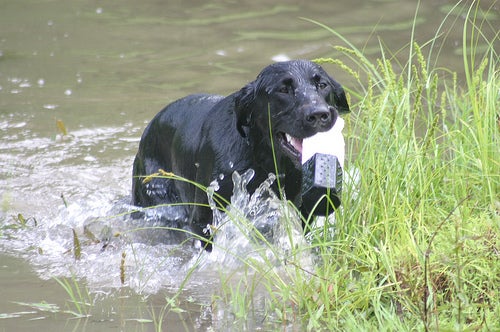 *OL.com Exclusive: The complete version of “Teach Him Right” from the March issue of Outdoor Life*

Waiting until two weeks before the season to try and turn your couch-lounging family pet into a top-notch hunting dog is a huge mistake. The next 6 to 9 months are critical to shaping your retriever’s behaviors for the field. When training this offseason, keep these common pitfalls in mind and avoid them at all costs.

Whether you’re training a puppy or running an intermediate-level dog on a setup, expecting it to perform a task it’s not ready for is a recipe for disaster. At best you’ll hack through it and teach him the wrong way to do it; at worst you could undermine his confidence in himself and you as a handler. Instead of testing the dog to see how he performs, first train every little step he’ll need to accomplish the goal.

DT Systems pro and bird dog trainer George Hickox carries three items in every training bag: a clicker, e-collar and duck tape. The tape is for a handler’s mouth. “When you repeat commands, you dig a hole you can’t escape,” he says. “If you say: ‘sit…sit,’ the first sit becomes meaningless to the dog. However, if he sits on the second command, you can’t punish him for not performing with the first command; if you do he’ll just be confused.” Say a command once and enforce or reward appropriately.

When training a retriever on a lake or pond, you’ve introduced a variable that puts you at a severe disadvantage: deep water. It’s tough to make a meaningful and well-timed correction, stop an undesirable behavior or set the pup up for success if he’s overwhelmed by the suction and factors that accompany water. Remember: prior to training a concept in water, make sure your dog has a thorough understanding of it on land.

For far too many people, an e-collar is a tool of last resort. They’ve screwed up pup’s foundation training and want to use the collar as a big stick to make the dog listen at a distance. There’s no faster way to ruin a good dog than to slap on an e-collar and start zapping away. Proper e-collar conditioning involves formal introduction and incorporation of the tool into training procedures, as well as teaching the dog how to avoid its use.

Training a retriever to an advanced level is largely a balancing act between competing and contradictory exercises. One such example is the use of bumpers and birds; a steady diet of only one will cause problems. With too many bumpers, prey drive can be compromised and the dog can become bored. On the other hand, an overabundance of bird use will turn the dog off to bumpers, which makes it hard to carry out necessary drills. Dan Ihrke, another DT Systems pro, likens the issue to eating burger after filet mignon; it just doesn’t compare. Instead of sticking largely to one or the other, mix it up and use birds as a reward for difficult exercises.

You can’t build a house that lasts for years without a solid foundation. The same is said of well-trained dogs. In the retriever world, obedience is ultimately the foundation. If your obedience isn’t rock solid, your foundation is compromised and sooner or later your dog is going to fall apart. To avoid the situation, get it right from puppyhood. Work on obedience and yard drills until performed easily and with at least an 80-percent success rate before moving onto the next step in training. If you find yourself continually making corrections or the dog is confused, take a step back in your program.

Waterfowling and upland hunting is often a social engagement and many times more than one dog is present. If your dog is never exposed or trained around other canines, he won’t know how to interact with them, won’t understand that every retrieve and bird doesn’t belong to him and his manners could be so atrocious that you don’t get invited back to hunt. To combat this problem, find a local training group to join. Check out the AKC, UKC/HRC, NAHRA or NAVHDA programs.