Waterfowl hunters can begin to rejoice as the season draws near. Not only has the countdown to setting decoys, calling,... 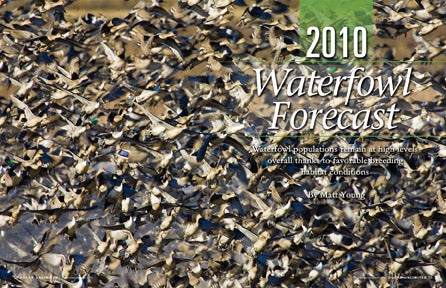 Waterfowl hunters can begin to rejoice as the season draws near. Not only has the countdown to setting decoys, calling, shooting and working dogs in real-life conditions begun, the ****Ducks Unlimited 2010 waterfowl forecast is favorable with most duck species at or above their long-term average. That means liberal bag limits and season dates!

Every waterfowler knows that nesting habitat dictates population cycles and that poor conditions mean a low-point in that cycle. This year, however, pond counts (the unit of measure for wetland abundance on the prairie nesting grounds) were 34-percent above the long-term average and nearly all duck species were similar to last year’s populations. Check out some of the highlights from the DU forecast:

For more on waterfowl seasons, populations and harvests, visit http://flyways.us/ –a collaborative venture by the U.S. Fish and Wildlife Service, Office of Migratory Bird Management, the flyway councils, and state wildlife agencies.