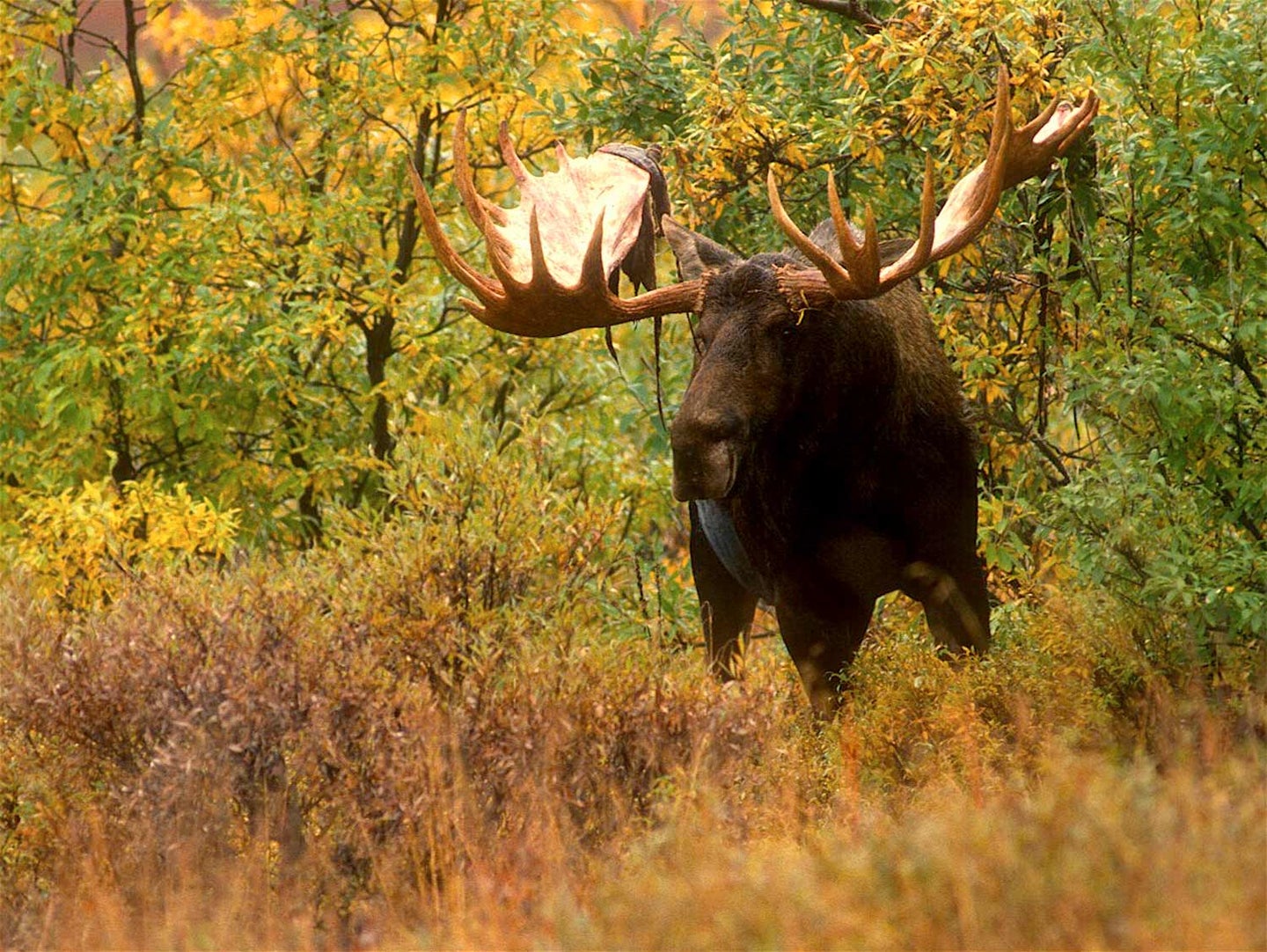 Moose by the dozens have fallen to the 7mm Rem. Mag. The .28 Nosler and 7mm RUM push the same bullets—just faster. Ron Spomer
SHARE

The U.S.A. hasn’t fully adopted the metric system, but our shooters and hunters have. We are now conversant in 6mm, 6.5mm, 7.62mm — and especially 7mm. There are now at least 14 7mm cartridges being manufactured in the U.S. with several wildcats waiting in the wings.

You might think Remington started the 7mm cartridge trend in 1962 with its famous 7mm Remington Magnum, but by then the 7mm Mauser was already well known. It had impressed its power upon our troops in Cuba under fire from Spanish Mausers in 1898. Teddy Roosevelt was so impressed that he used the 7×57 as a basis for what became the .30-06 Springfield.

Meanwhile, over in Africa a Scottish commercial ivory hunter named Bell was making the little 7x57mm famous as a BIG big game round by dropping some 800 elephants with it. His bolt-action rifle was chambered for the confusing .275 Rigby. That was the 7x57mm re-branded for the non-metric British Rigby rifle.

Less well known in the U.S. (but more ballistically advanced) was the 7mm Weatherby Magnum from the early 1940s. More obscure were the 7mm Gibbs and the Norma-loaded 7x61mm Sharpe & Hart in the early 1950s. Neither caught on, but American shooters were certainly beginning to recognize the potential for 7mm cartridges. Then Remington blew the doors wide open with their new 7mm magnum chambered in their equally new and affordable M700 rifles. Almost overnight the “seven em em” was on the lips of American hunters. And in the chambers of their rifles.

The 7mm shoots .284-inch diameter bullets through bores .28-inch across, but only two use this Imperial measuring system in their titles: .280 Remington and .284 Winchester, both excellent but underrated “standard” velocity cartridges. Like all 7mms, they can fire bullets as light as 100-grains and as heavy as 180-grains. Handloaders can take advantage of all these, but most commercial ammunition features 120-grain to 178-grain bullets.

The 7mm advantage comes from relatively high BC (ballistic coefficient) bullets in popular weights commonly used for hunting horned and antlered game. Typical 140- to 175-grain, .284 slugs are wide enough to resist bending (a problem Bell had with tough, thick elephant bones) yet narrow enough to minimize drag. Given the same basic form and muzzle velocity (MV), a 180-grain, .284 bullet will fly flatter, drift less, and retain more energy downrange than a 180-grain .308 bullet . And it will likely penetrate farther because more of its mass rides in the long shank behind its nose. Retained mass helps maintain momentum.

Of course, you can exactly match 7mm ballistics with a .308 bullet if BC and MV are identical. The .308 just has to be quite a bit heavier. And that means more powder. And more recoil. And that’s part of the reason 7mms are so popular. If you’re going to tackle an elk or mule deer with a 180-grain bullet at around 2,900 fps, the 7mm version in that bullet weight will shoot flatter, drift less, and put more energy on target than the .308 version.

That’s the 7mm magnum advantage. Let’s compare three cartridges that do that; the old 7mm Rem. Mag., the new .28 Nosler, and the over-the-top 7mm RUM.

Like most of our early magnums, this is based on the belted .375 H&H Magnum case. I’m sure Remington engineers started with the .300 H&H case, but it was itself a modification of the .375, so same difference. Engineers made three modifications that ensured popularity: they shortened the case to fit standard-length actions. They straightened the sidewalls. They sharpened the shoulder angle. The resulting reservoir holds 77 grains of water with a 175-grain bullet seated to Over-All Cartridge Length (measured base to tip of bullet.)

Fill this brass case with smokeless powder instead of water and, according to some handloading guides, 62.5 grains of Reloder 22 should shove a 175-grain bullet from a 24-inch barrel 2,870 fps. Another indicates 74-grains of Hodgdon 870 will churn up 2,954 fps. Your results may vary.

Because the 7mm RM is a familiar benchmark, let’s establish some basic performance numbers in an 8 pound rifle with 24-inch barrel spitting a representative spire point, boat tail, 175-grain hunting bullet, B.C. .672., MV 2,900 fps. This compromise should account for the slower muzzle velocities many rifles produce with factory loads and safe handloads. We’ll use a 10-inch diameter target zone for computing Maximum Point Blank Range. (Aim for center and bullet will not rise more than 5 inches nor fall more than 5 inches within the MPBR. This is probably too high for real world hunting, but we’ll use it as a standard here for cartridge-to-cartridge comparison consistency.)

These are some impressive numbers. They explain in part the enduring popularity of the 7mm Rem. Mag. But to really appreciate this, let’s run a trajectory chart out to some crazy ranges.

First, notice that kinetic energy remains above the “elk killing minimum” of 1,500 ft-lbs at 700 yards. I neither believe in this minimum nor in shooting elk at 700 yards, but this is impressive performance for a standard-length cartridge nearing its 60th birthday. Check out the 10 mph right-angle wind deflection at 400 yards: just 7.82 inches. Clearly the 7mm Rem. Mag. and a high B.C. bullet have what it takes for hunting anything short of dangerous game. Now let’s compare this to our other two 7mm candidates.

Improving 7mm Rem. Mag. performance without stepping up to a full magnum length cartridge and rifle action was Nosler’s goal. The .28 Nosler of 2015 was their solution. It is based on the fat, belt-free 404 Jeffery case, but Nosler likely just started with the 7mm RUM which is itself a modified Jeffery. Nosler shortened the RUM case, gave it a 35-degree shoulder, and shortened the neck to .276”. The rim of the RUM was already rebated to fit a .534-inch bolt face.

The completed case holds 90 grains of water with our 175-grain boattail spire point bullet seated. Fill this with 88 grains of slow burning Reloder 33 powder and, according to the Nosler Reloading Guide 8, you should get 3,211 fps from a 26-inch barrel. That results in performance like this:

Whoa grandma! Those are some impressive numbers. More than 1,900 ft-lbs of energy at 700 yards. Just 5 inches of drop at 400 yards and 6.8 inches of wind deflection. This is a long-range dream cartridge for sure. But you pay the price in recoil and that 26-inch barrel. Adding two inches of barrel to the 24 inches of our 7mm Rem. Mag. might not sound like a big deal until you start maneuvering it in and out of cases, trucks, scabbards, and forests. The difference might surprise you. Worth considering. Now let’s check out the 7mm RUM.

In 2001 Remington looked to the old .404 Jeffery case for its ultra-speedy 7mm. But they didn’t shorten anything. You want 98.2 grains water capacity behind a seated 175-grain bullet? You go long. Full-magnum action long. Overall cartridge length of the 7mm RUM is 3.6 inches, right there with a .375 H&H Magnum.

Despite all this powder volume, reloading guides all indicate the 7mm RUM tops out at around 3,150 fps with a 26-inch barrel, slightly slower than the .28 Nosler. Part of this is due to the .40 inches of freeborn Remington builds into its 7mm RUMs to minimize chamber pressures on ignition. This friction-free bullet jump allows it to break inertia more easily. Going to a 28-inch barrel provides more volume for burning those big doses of slow-burning powder, adding 50 to perhaps 100 fps to 26-inch barrel velocities. But if you suspect a 26-inch barrel might be a bit unwieldy, wait’ll you haul around a 28-inch. This is not a rifle you want to weave through dog-hair timber.

As you might guess, there isn’t much trajectory/performance difference between the RUM and the Nosler.

So how do you choose among these three? They are all throwing the same bullets more than hard and fast enough for anything. Yes, the .28 Nosler wins the ballistic competition with the RUM right on its heels. But with laser rangefinders one can easily compensate for the slightly greater drop of the 7mm Rem. Mag. And at sensible hunting distances even a basic MPBR hunter should have find more than 90 percent of his shooting opportunities covered by the Rem Mag. without laser assistance. Bonus benefits with the 7mm Rem. Mag. include more options in rifles and ammo, more accessible and less expensive ammo, less recoil, a potentially shorter, handier, lighter rifle, and longer barrel life.

Barrel life is always a concern with maximum velocity, so-called overbore cartridges. The extra heat required to reach hyper speed eats away at barrel throats rather quickly. Some are claiming as little as 600-round barrel life for RUM, 1,000 rounds for .28 Nosler, 2,000 for Rem. Mag. Carefully spaced shots (don’t overheat the barrel) always extend life, as does each shooter’s accuracy demands. A barrel “shot out” for target competition might remain more than accurate enough for big game hunting.

Read Next: Small Calibers for Big Game. This is Not a New Thing

Barrels are like truck tires. You can drive 10 mph and get thousands and thousands more miles out of your tires, but wouldn’t you rather drive highway speed? High-velocity cartridges are high velocity for a reason. If you want 7mm magnum performance, you’ll have to change tires (barrels) now and then. Most hunters who resist target practice can get a lifetime of good accuracy out of these 7mms.

A bigger concern might be barrel heating and subsequent “wandering.” Thin barrels tend to distort slightly with heat, opening up groups. Three quid k shots can overheat a thin barrel and turn a 1 MOA rifle into a 2 MOA. If you go with a hot 7mm, get one with a fairly heavy barrel contour.

When I add this up, I default to the 7mm Rem. Mag. for my brand of hunting. Lots of hiking, backpacking, climbing, shooting to 450 yards, maybe 500 yards. This calls for a light rifle. No more than 7-pounds finished and field ready. I’d be set for all North American game plus African plains game right up to 1,800-pound eland. Indeed, over the years my 7mms have handled this stuff. But, were I young and tough and starting from scratch, I might be lured into the .28 Nosler. The additional reach is tempting, but I’d pay the price with a 26-inch, fairly heavy barrel. Short, light barrels just don’t do justice to high temperature, high velocity, high pressure, overbore magnum cartridges.

Were I seeking the absolute top-end, extreme-range performance and willing to carry a 28 inches of barrel, I’d look harder at the RUM.