Every year sees the introduction of new loads from ammunition makers. Some are intended to close caliber gaps in an... 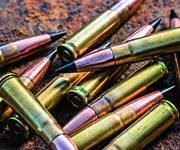 Every year sees the introduction of new loads from ammunition makers. Some are intended to close caliber gaps in an existing product line. Others stand on their own as very useful loads that either promise increased performance from existing firearms or fill a need that other loads do not address.

The Advanced Armament Corporation 300 AAC Blackout 7.62x35mm cartridge (300 BLK) was designed to put .30-caliber power into a standard mil-spec AR15/M16 5.56mm/.223 platform. And it was to do so while allowing the use of standard AR 5.56mm high-capacity magazines without modification to the magazines or the lower unit, and using the standard bolt-carrier group and buffer system.

This was accomplished by shortening the 5.56mm case, necking it up to .30-caliber, and keeping the overall cartridge length to that of the standard 5.56mm/.223. In that respect, it is virtually identical to the J.D. Jones-designed .300 Whisper. The major difference is that the 300 BLK uses a slightly longer neck on the cartridge case. The 300 BLK will not chamber in a .300 Whisper, but the Whisper will chamber and fire (without any loss of accuracy) in a 300 BLK.

The resulting cartridge provides some interesting ballistic possibilities and, given the small case and efficient modern powders, a load that produces recoil levels that are very comparable to the 5.56mm.

When loaded with projectiles in the 110- to 125-grain range, the 300 BLK produces velocities of up to 2,400 fps (from a 16-inch barrel) and virtually duplicates the ballistics of the 7.62x39mm AK47 load or the venerable .30/30 Winchester. With the right bullets, it becomes a legitimate 250-yard medium-game load. Move to bullets in the 150- to 165-grain range and velocity drops by a few hundred fps. It now becomes a light-recoiling Action Rifle load that bucks the wind better than the 5.56mm and drops distant steel targets with more authority.

Load it with .30-caliber 220-grain match bullets and it goes subsonic, making it ideal for suppressed weapons in the military or law enforcement arena while providing an increase in power over 147-grain 9mm subsonic loads.

All of this is achievable with nothing more than a new barrel and maybe some tweaking of the gas system.

Barnes is the latest ammo maker to produce 300 BLK loads, and its new VOR-TX 110-grain TSX FB is our Ammo of the Year.

It features a 110-grain, polymer-tipped, all-copper Triple Shock bullet that achieves 2,400 fps from a 16-inch barrel, producing 1,407 foot-pounds of energy. That puts it squarely in the .243 Win. class, and Barnes claims reliable expansion at velocities as low as 1,300 fps.

See the shooting section in the August 2012 issue for runners up.