Which of these loads will serve you best the next time a deer enters the crosshairs? 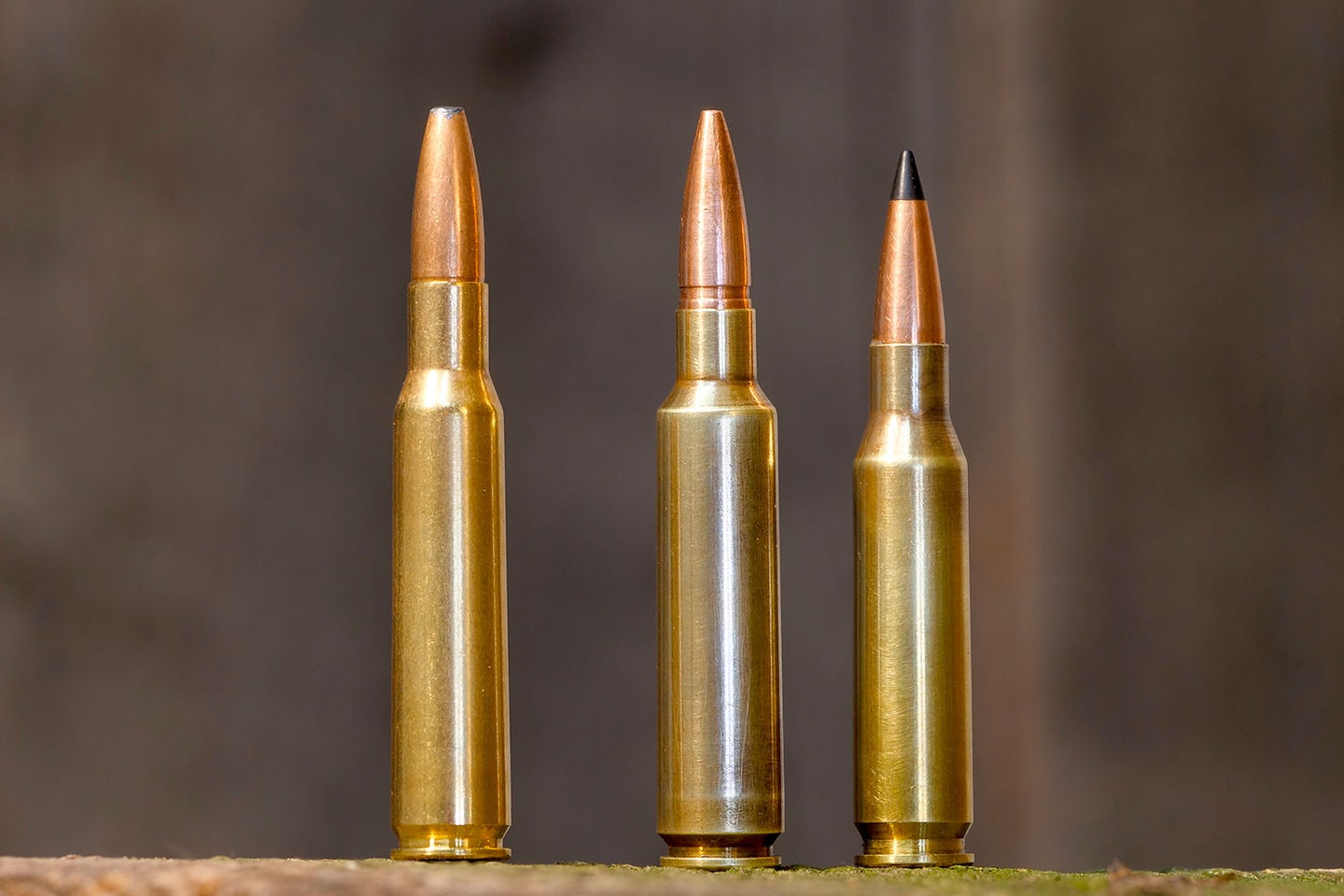 Why the heck do we have rifles chambered for the 7×57 Mauser, the 7mm-08 Remington, and the 284 Winchester when they all throw the same bullets at about the same top muzzle velocities? Why did they create all three of these anyway. Shouldn’t one be enough?

The honest answer is that there probably isn’t just one answer. The three cartridges were created over a span of 88 years. That was long enough for the world to go through two world wars and switch from riding horses to rockets. Maybe cartridge designers thought the older 7mms were no longer up to the tasks asked of them. But if so, they were wrong. Let’s take a magnifying glass to each of these 7mms and figure out why they’re here and which we might want to hire for taking our next deer or elk to dinner.

This 1892 creation is one of the great, great, great grandpas of bottlenecked, centerfire rifle cartridges. It was one of the first created specifically for a bolt-action rifle. It blossomed shortly after smokeless powder came onto the scene. Just as importantly, it was chambered in the strong, new, fluid-steel barrels just then being perfected. Those barrels were soon being screwed to a new Mauser bolt action that to this day is the benchmark for a proper bolt-action rifle, the Mauser Model 1898.

This happy confluence of modernity coalesced just in time for serious field testing around the world. The British Empire was in full flower. It’s officers were pressed upon by rural folk from India to China to dispatch man-eating lions, tigers, and leopards. The 7×57, referred to as the 275 Rigby by the Brits, proved up to the task. It was deadly on Africa’s Cape buffalo, hippo, and even elephant. Ivory hunter W.D.M. Bell floored some 800 tuskers with his little 275 Rigby Mauser and 173-grain round-nose bullets. He aimed for the brain and usually hit it. Bell was known to shoot flying ducks with his 275 Rigby.

Both the 7×57 Mauser and M98 rifle were so good that the United States “borrowed” heavily from their function and design in making the .30-06 cartridge and Springfield bolt-action rifle. The borrowing was so heavy that Mauser sued and won royalty payments. Measure the base and body diameter of the .30-06 and 7×57 and you’ll see a remarkable similarity. This will appear again in one of our other 7mms.

The 7×57 was and is so good that it hangs on despite all the advancements in guns and ammo over the past 128 years. But it has one shortcoming. Because it was sometimes chambered in somewhat weak rifle designs or materials, it’s chamber pressure limits are set fairly low, quite a bit lower than they could be in a modern rifle. SAAMI specs the 7×57 for maximum average breech pressure of just 51,000 psi. In contrast, the .270 Winchester’s breech pressure is set at 65,000 psi. Even the little 6mm Remington, which is the 7x57mm necked down to .244, is rated for 65,000 psi, suggesting that the brass case is not the weak link. Ammo manufacturers are simply playing it safe so one of their 7×57 cartridges doesn’t explode in a weak, old military rifle.

The good news is that European ammunition manufacturers aren’t equally worried. They load to slightly higher pressure limits of 56,565 psi. This means factory ammo from Norma will shoot about 100 fps faster than U.S. brands. Handloaders, too, can push pressures higher in strong, modern actions. Of course, it’s always safest to check with your rifle’s maker or a competent gunsmith first, but if a 7×57 necked down to .243 can handle 65,000 psi.

The 7x57mm Mauser case holds about 51.4 grains of water with a 150-grain spire point bullet seated to its standard overall length of 3.065”. This falls between the .30-06 “standard” (3.33”) and the .308 Winchester “short-action” (2.81”,) which leaves the 7x57mm in no-man’s land. Not quite long enough to take full advantage of a standard-length action, slightly too long to work well in a short-action. And this is one of the reasons we find ourselves with the next two 7mms.

Of all our mid-power 7mms, this may be the least well known and possibly the best. It’s essentially a short-action round that has the potential to run neck-and-neck with the longer .280 Remington. Alas, like the 7×57 it suffers somewhat from a low maximum breech pressure, 56,000 psi. But this isn’t due to it being chambered in weak, older rifles. No, the .284 Winchester didn’t come out until 1963, Many cartridges by that date were already rated for 65,000 psi. Why was the 284 Winchester so throttled? Probably because Winchester designed it for and released it in their then new Model 88 and 100 autoloading rifles. Whether these were too weak to handle higher pressures or Winchester was just being cautious or they didn’t think the extractors could handle the higher pressure loads, the die was cast.

That raises the question of why Winchester created the fine little .284 Win. for a lever and auto at a time when bolt-actions and high-velocity cartridges like the 7mm Rem. Mag. were already stealing thunder from lever-actions, pumps, and autos. Conjecture is they wanted to capture the legions of lever-action fans who wanted .270 Winchester performance in their familiar actions. The auto-loader was supposed to appeal to the millions of soldiers recently engaged with the Army’s Garand autoloading rifles. Even though the short-action .284 Win. did pretty nicely match the ballistics of the .270 Win., it fizzled in the market place.

Part of the fizzle was a tepid response from gun writers, few of whom fully appreciated the subtle advantages of short-action rifles. At the time Winchester’s M70 bolt-action wasn’t even built as a short-action. And then some gun writers declared that a 175-grain bullet would take up too much powder space in the .284 case, so it could never match the longer .270 Win. or .280 Remington. Except it could. Because it has an unusually fat case.

Even with its rather low pressure limit, the .284’s original 150-grain factory load was rated 2,860 fps, right on the heels of most 150-grain .270 Winchester loads. And that was the point. What Winchester was trying to do was provide lever-action and autoloader fans .270 Winchester performance in short, quick-handling rifles. Why they went with a .284 bullet instead of .277 bullet for this remains a mystery. It might not have made much difference anyway because by 1963 more and more shooters were looking to bolt-action rifles for their hunting.

This is the modern version of the 7x57mm Mauser and .284 Winchester in a smaller package. Yes, it’s a standard short-action at 2.8-inches COAL, same as its parent case, the .308 Win. With our 150-grain bullet aboard, the 7mm-08 holds 47.8 grains water, by far the smallest volume of this trio. Yet it can push that bullet upwards of 2,800 fps from a 24-inch barrel because its SAAMI maximum pressure is 61,000 psi.

As you might imagine, this was a popular wildcat as early as 1958, just a few years after the .308 Winchester made its debut. Sensibly, it was known as the 7mm/308. With the growing appreciation of short-action rifles in the 1970s and 80s (lighter, stiffer, quicker,) it began gaining fans. In 1980, Remington figured it was worth adopting as one of its own, and the commercial 7mm-08 Remington was born.

This was well after the .280 Remington, a necked down 30-06, and I suspect Remington was a bit worried that the new shorty would steal some thunder from the longer round. And maybe it has. But neither cartridge has ever achieved the popularity it deserves. Both provide slightly better ballistics than their parent cartridges when shooting the same weight/shape bullets simply because the .284 versions have high Ballistic Coefficients and Sectional Densities.

The 7mm-08’s best “feature” is its near perfect balance of speed, penetration, handiness, and tolerable recoil almost identical to a .308 Win. Many have called it the perfect whitetail round. It hits harder than the .30-30 but drops and drifts a lot less. And it can be chambered in similarly short, light, fast-handling rifles, although most 7mm-08s are bolts rather than levers. Remington gave its 7mm-08 the perfect home in 1983 in the new Model Seven, a short bolt action with a 18.5-inch barrel.

Because each of these fine cartridges throws the same bullets, ballistic comparisons are easy. Publishing charts is almost redundant. The cartridge with the highest pressures and/or most powder cranks out the highest muzzle velocity and thus the least drop and drift, the most downrange energy. Handloaders for years have been proving that, in strong, modern rifles designed to handle 61,000 psi or more, you can load all of these to nearly identical muzzle velocities with all bullet weights. The more revealing comparison would be among factory ammunition. Here the 7mm-08 Remington wins both in variety and velocity. Probably in availability, too. If you expect to find ammo for your rifle in any and every retail store that sells ammo, your chances are better with a 7mm-08.

Here is a trajectory chart for the highly efficient, 150-grain Nosler Accubond Long Range bullet at 2,850 fps, a muzzle velocity handloaders should safely reach with any of these 7mms. Just remember every barrel and rifle are different. They won’t all produce the same velocity with the same load.

Finding rifles chambered for the 7×57 Mauser can be challenging, but not impossible for the .284 Winchester. It’s actually easier to find rifles bored for the .284s hot offspring, the 6.5-284 Norma. Even 7mm-08 rifles can be a bit hard to find, although most manufacturers have chambered for it.

Real rifle nuts who handload and are looking for something different should lean heavily toward the 284 Winchester. Even if loaded ammo is scarce, you can neck-up 6.5-284 Norma brass and load to your heart’s content. I’ve used the .284 Win. with perfect satisfaction to take everything from coyotes to sheep, goats, and elk.

Hunters who love nostalgia and history might prefer the 7×57 Mauser. Any cartridge that has regularly and often felled lions, buffalo, and elephants has all the bonafides I need to see. Hunting African plains game with a 7x57mm enriches the whole safari.

The pragmatic hunter should stick with the 7mm-08. Rifles and ammo are easier to find. I’ve yet to hear from a 7mm-08 shooter who doesn’t celebrate the day he or she decided to buy a rifle in this chambering.