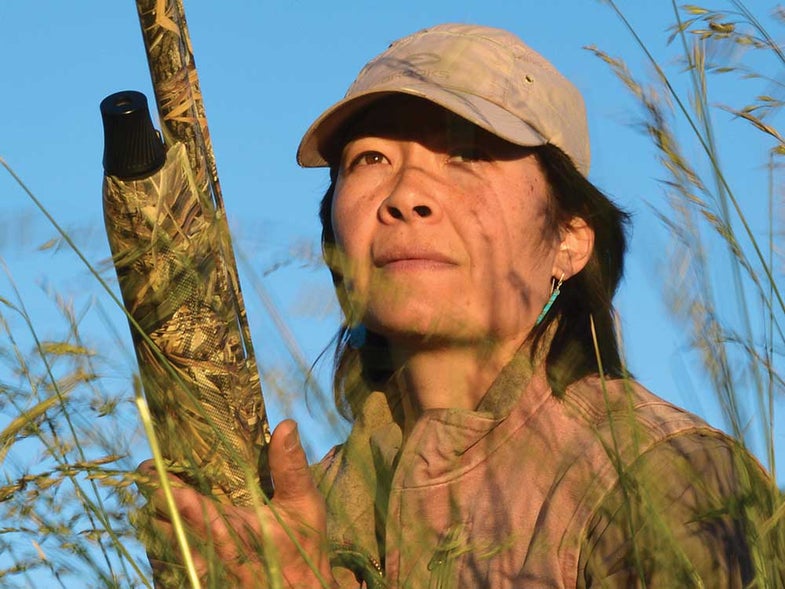 Both Weatherby and Syren USA are gearing up to meet the challenge and demand for rigorously designed, quality firearms for women. After putting hundreds of shells and rounds through the Syren XLR5 Waterfowler and Weatherby Camilla over six months of testing and hunting, here are my impressions.

Camilla was Roy Weatherby’s wife, and by all accounts she was a class act. So it is fitting that Weatherby’s first women’s-specific rifle carries her name. After range testing, I took the Camilla hunting in Namibia.

The Camilla is built around the proven Vanguard Series 2 action and comes with Weatherby’s sub-MOA guarantee. It’s offered in .243 Win., 6.5 Creedmoor, 7mm-08 Rem., and .308 Win. All have a 13-inch length-of-pull, 20-inch blued barrel, 5+1 magazine capacity (4+1 for the Creedmoor), and weigh around 6 ½ pounds. The rifle sports a Turkish walnut stock with rosewood accents and a satin finish, with a subtle fleur-de-lis motif in the checkering on the wrist and forend.

Weatherby gave the Camilla a slimmer grip and forend, and a comfy grip angle that reduces trigger reach. The recoil pad toes out at a negative angle, fitting a woman’s chest and shoulder better than a standard pad. The extra-high, Monte Carlo–style comb provides instant, positive cheek weld. This begets consistency, not to mention comfort and a reliable sight picture.

The stock design and excellent fit mitigate the kick from a .308 in a light platform. I was able to stay in the scope and get back on target quickly, and this proved key when I had to take a follow-up shot on a running kudu. The losses in velocity from a 20-inch barrel (versus more traditional 22- and 24-inch configurations) were surprisingly negligible. Moreover, during several tortuous belly crawls and sprints through thorn-tree gauntlets, all while trying to prevent the barrel from sweeping my companions or shoveling sand, I was grateful the Camilla was so maneuverable.

With 3-shot groups, the Camilla easily exceeded Weatherby’s sub-MOA guarantee. With the 5-shot Outdoor Life protocol, however, the groups opened up, though the rifle did turn in two sub-inch groups with Hornady’s 178-gr. ELD-X bullet.

The one thing I might address on the Camilla is the trigger. Weatherby says the two-stage system is adjustable to 2.5 pounds, but I could only get mine down to 3.25 pounds. And the amount of creep in the trigger was more than I cared for. It did not prevent me from taking several animals cleanly, nor from printing good groups off the bench. Timney offers a drop-in trigger for the Vanguard, which is an easy install.

As Athena sprang forth fully formed from Zeus’ head, so Syren USA launched as a women’s-specific division from Caesar Guerini/Fabarm in 2014. Before the brand was even formed, however, the Syren XLR5 Waterfowler had been in the works for a year.

The shotgun has a 28-inch barrel and a 3-inch chamber, and it comes with five chokes that will cover most applications. The XLR5 is gas-operated and clad in a Realtree Max-5 soft-touch finish, and weighs 7 pounds 1 ounce. My sample had a 5.75-pound trigger pull.

The XLR5 Waterfowler differs from the men’s version in certain key areas: shorter length of pull and less drop at comb and heel. It also has a reduced wrist diameter, grip radius, and trigger reach; ¹⁄₈ inch of cast; and a Monte Carlo–style comb. It comes with shims for fine-tuning the fit.

Ripe peaches envy my bruising ability, yet I patterned stout turkey loads with the XLR5 off the bench and came away unscathed. It’s not like the XLR5 made turkey loads fun, but the point is that its geometry encouraged good form, which is a critical element in recoil management.

It bears mentioning that I also had several men, ranging from five-foot-eight to six-foot-two, give it a try. They said it felt balanced, pointed naturally, and was easy to shoot well. My five-two, recoil-sensitive friend who had never fired a shotgun in her life nervously tried the Syren. Within minutes, she started dusting clays and having a ball. Such versatility and approachability is noteworthy.

Syren says the XLR5 Waterfowler is designed to cycle 1 ¹⁄₈-ounce target loads, but it did even better for me, cycling 1,200 fps 1-ounce loads with only one glitch. At one point I had three misfeeds in succession with those light shells, but in hundreds of subsequent rounds, I could not reproduce the misfeeds, despite forgoing cleaning. To paraphrase the estimable Phil Bourjaily, it’s called “testing,” not “laziness.”

Winchester Longbeard XR and Hevi-Shot Triple Beard patterned well, so I flipped a coin and went with the 1 ¾-oz. Triple Beard for a turkey hunt. I knew it patterned top-heavy for me, so when a big Rio Grande tom came to within 35 yards, I held low and took the shot. The Syren and Hevi-Shot performed perfectly, and there in the grass lay the iridescent proof.