Today we switched gears, putting down the pistols and picking up our shotguns. A lot of what we covered built... 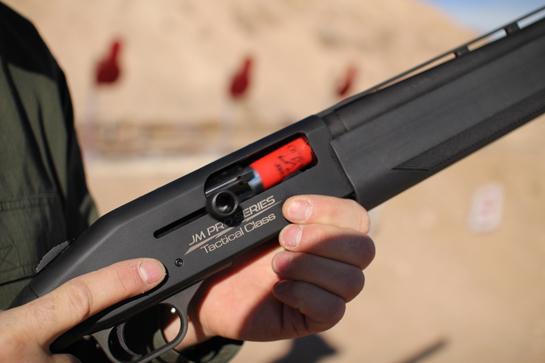 Today we switched gears, putting down the pistols and picking up our shotguns. A lot of what we covered built on the foundation of the first day of the event, but included drills and techniques unique to shotguns and specifically to shotgunning for 3-gun competition.

Josh Phillips, the winner of the shooting slam, is an experienced shotgunner, having hunted ducks, doves, and upland birds for much of his life. But it is one thing to hunt with a shotgun in a casual field setting and a whole other thing to learn to run a shotgun as a defensive or competitive tool.

We started, sensibly, by patterning our guns with bird shot, buck shot and slugs at distances from 3 to 50 yards. Patterning is always revealing and, in the case of my Mossberg 930 JM Pro 9, showed that my shots were being thrown high and right, no matter what load I put through the gun. Josh’s gun, an identical model but with a 22-inch rather than a 24-inch barrel, on the other hand, was center-punching the target each time he pulled the trigger.

With that established, we moved on to the most important skill any 3-gun competitor needs to master with a shotgun: the reload. The saying is true. Matches in 3-gun are won by being quick with a pistol, accurate with a rifle and by reloading a shotgun as fast as possible.

The ultimate goal is to be able to strip out four shells from your shell carriers at a time and smoothly feed them into the shotgun, taking no more than one second per shell to accomplish the task. If you can do that while moving from one part of a shooting stage to another you will turn in some impressive times in 3-gun.

This is easier said than done, however, as Josh learned.

“I basically didn’t know how to properly reload quickly and in the heat of the moment,” Josh said. “That’s what I’ve really started to understand about Gunsite. I’m learning to run these guns in ways I never thought possible.”

“If you get ahead of yourself or behind yourself, you’re gonna mess up,” Josh said. “This is all new to me but I like the way the teaching incorporates strategic thinking as well as the marksmanship and fundamentals.”

We took that same mindset to the afternoon session, where we did drills to handle four shells at a time and to work on targets common to 3-gun like Texas stars and arrays of poppers.

By the end of the day, smooth reloads and fast times had become the norm, rather than the exception.

“This is just awesome,” Josh said.

Tomorrow, we’re going to be working with an even greater variety of targets–everything from point blank range to 400 meters–when we transition to the Rock River Arms carbines.