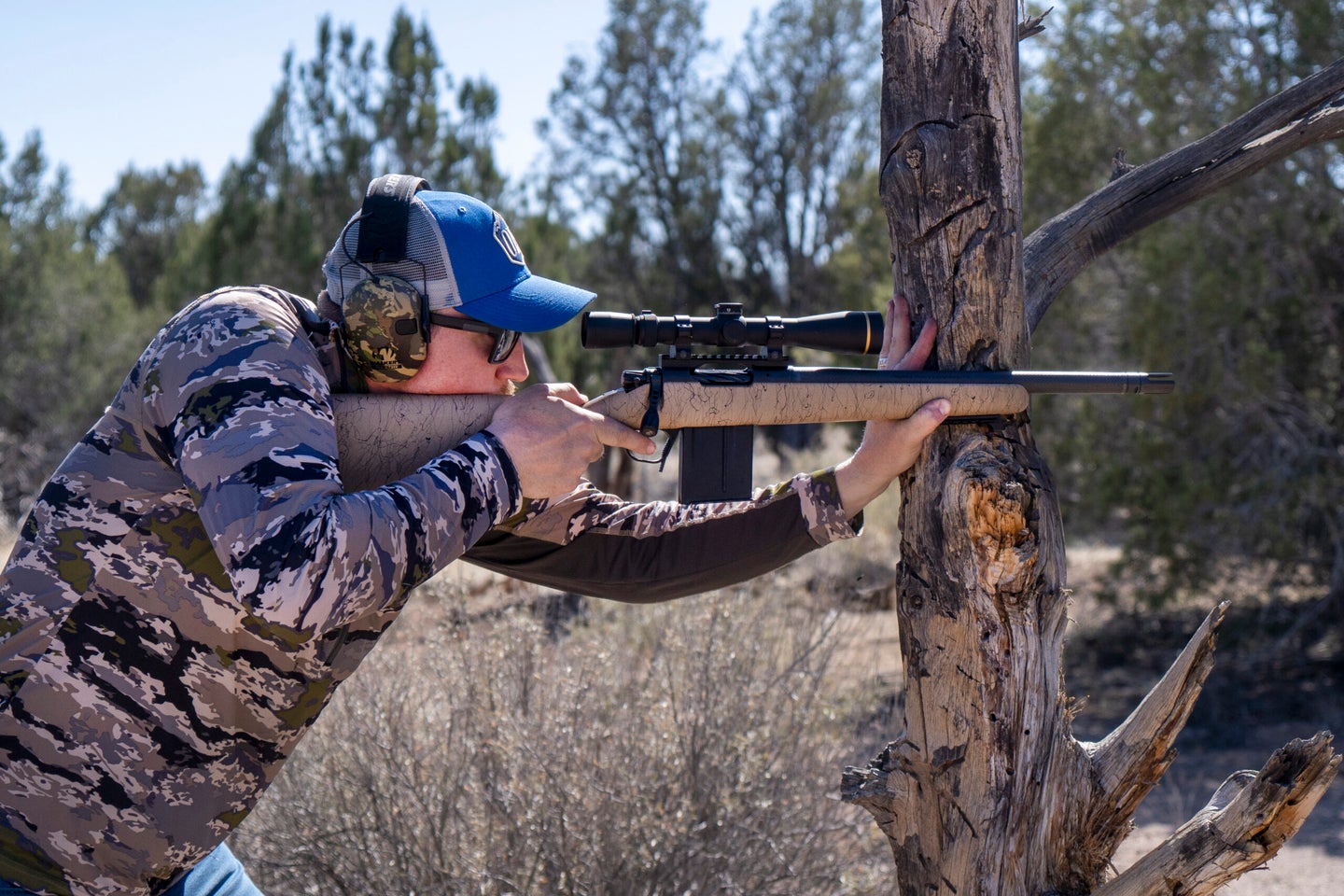 The author fires from position 1 on the scrambler. He's shooting the Christensen Arms Ridgeline Scout in 6.5 Creedmoor. Natalie Krebs
SHARE

I’ve driven by this sign all week, and THIS is the Gunsite Scrambler? I scoffed to myself as we were getting the official pre-shooting walkthrough. Piece of cake, I thought. I and several other Outdoor Life editors were wrapping up a week of trigger pulling at Gunsite Academy, a premier firearms training center in Arizona, and we were fixing to get a genuine Gunsite experience to wrap up our rifle handling evaluations.

I’d heard of the Scrambler before. It’s a seven-stage, field position rifle course that is shot for time, and it’s always talked about with reverence as a sort of Gunsite rite of passage. Walking down the course trail though, I wasn’t overwhelmed by the brilliance of an intricately constructed 3-gun stage. The Scrambler course was crude and simple, which I would come to appreciate.

What Is the Scrambler?

The Scrambler is a simple course of fire that features seven firing positions. Some of the positions offer support for rests, some don’t. There’s even “the doghouse,” a literal box you must crawl into to shoot from, then crawl back out again. The target lanes are anywhere from 10 to 20 yards apart and each has a single steel silhouette target that set between 75 and 150 yards out. Your goal is to move through the course as quickly as you can, hitting each target—and you can take a maximum of 2 shots at each silhouette. When you hit the a target you move on to the next position. If you miss the same target twice, your run doesn’t count.

The course is simple, and none of the shots are very challenging by themselves, but once you start running between positions trying to shoot the course as quickly as you can, then you start to experience the real challenge. The beauty of the Scrambler is in its simplicity. It folds the fundamentals and experience of Gunsite instruction into a course that is safe and can be used both for evaluation and development of shooting skills in a pressured situation.

A slow stroll through the course would be quite easy for most shooters—but racing against the timer is a different story. Our instructor for the week laid it out plainly for us: “We have lots of shooters who take four or five minutes to finish. If you’re under a minute, you’re doing really good.”

The oxygen deprivation I experienced while running the Scrambler might have messed with my memory, but I believe our instructor said the all-time course record was 32 seconds, which was set by a young Marine. On their website, Gunsite has a video of a kid running it clean in 36 seconds. There is certainly some strategy and gamesmanship involved in shaving off precious seconds, but after running it myself, I can attest that that’s a damned impressive time.

Simple Skills of the Gunsite Scrambler

The scrambler is a simple course of fire that will put your shooting skills and the best rifles to the test, regardless of your ability or experience. You’ll have to move safely with your gun, shoot from field positions which you’ll have to find quickly, control your breathing (because you’re literally sprinting between shooting positions), and maybe even reload your magazine. The course must be run with the muzzle pointed downrange at all times and either the bolt open or safety engaged with the finger clearly off the trigger while moving.

“It’s designed to get your heart pumping and force you to control your breathing,” our instructor said. “You’re going to be short-of-breath by the end, try clenching your abdomen just before you shoot, that will help reduce your movement.”

This is a shooting exercise that stresses fundamentals, which are also core to hunting. I write about shooting fundamentals all the time, but putting them into practice under pressure adds another level of value. Building positions and rifle support, breathing control, trigger squeeze, and operating your rifle are all critically important. However, most of us hunters rarely practice any of this in a meaningful way. It’s when a game animal is in front of you, or when that timer beeps that those skills must be used together, and then you’ll really see how well prepared you are, or aren’t.

Beep! My instructor’s timer buzzed behind my ear. I came from a low-ready start position, to the dead tree at position one. The crosshairs settled and I fired. The ring of the steel came back as I whipped back the bolt on the Christensen Arms Ridgeline Scout, ejecting the case before running to the next position. I dropped to a knee. Bang! Ding! Next, I had a solid tree stump for a standing rest. Another hit.

After that it was into the doghouse. I crammed my not-so-skinny frame into the small opening far enough to get the muzzle out the front. Just let it settle, you can’t miss fast enough to win, I thought to myself. Bang! Ding! Back out and to the next station with a quick kneeling shot.

I’d run the Scrambler several times already, and my out-of-shape legs were running out of gas. A low horizontal log was the next rest. Hit. One last push got me to the last position and a final shot had me finished in 50.02 seconds. It was a clean run and my fastest time of the day.

What the Scrambler Will Reveal About Your Shooting Ability

A common reaction from hunters to a shooting drill like the Scrambler as skill-development practice would probably be an eye roll accompanied by some grumbling about how I don’t need to run through the woods rattling off rounds.

That’s true. You probably don’t. But you might need to shoot when you’re out of breath. You might need to shoulder your rifle and snap a quick shot to seize a fleeting opportunity. You might have to make a quick follow-up shot or top off your magazine when things don’t go according to plan.

Running timed drills like the Scrambler with intentional observation and adjustment will help you see where instabilities crop up in your shooting positions, and how you can fix them. You’ll also see where you might fumble with the operation or fit of a particular rifle. Flaws and features that might be flying under the radar will crop up as soon as stress is induced.

Run a drill like the Scrambler a few times and you will become smoother and faster at shouldering your rifle and establishing good head position. You’ll learn how your body will react to being jello-legged and out-of-breath. You’ll learn to improve your breathing cycle to get the shot off accurately and expediently.

The Gunsite Scrambler isn’t about doing cool-looking shooting stunts. It’s about testing and improving your fundamentals. The timer doesn’t just add stress, it allows you to track your progress and development. Want to go faster? You must polish your technique, sharpen your fundamentals, and become more efficient in shooting and operating your rifle. Doing those things will only help make you a more effective and more ethical hunter.

Set Up Your Own Scrambler Drill

Most everyday hunters will likely never get to go to Gunsite, and to truly benefit from a course like the Scrambler, you need to use it frequently. The good news is, you can take the same concepts from this drill and use it to improve your own shooting. If you have a range or shooting area where you can set up a few rifle field positions, running a drill like this is fun and it’s great practice.

You can use the Gunsite Scrambler as a template, with about seven stations, and a variety of realistic shooting position possibilities. The targets don’t have to be at far ranges, 75 to 150 yards is sufficient. Remember, the idea is for the course of fire to be simple and safe but challenging when timed and under pressure. The whole point is to incorporate some challenging movement that will get your heart pumping. Finally, ensure that you can move through your course in a safe manner while always keeping your gun pointed downrange. Keep your finger off the trigger until you’re on target and keep the action open or gun on safe while moving.