Sochi Olympics Biathlon: Everything You Need to Know

If you have limited time to watch the 2014 Sochi Olympic Games, do yourself a favor and skip the ski... 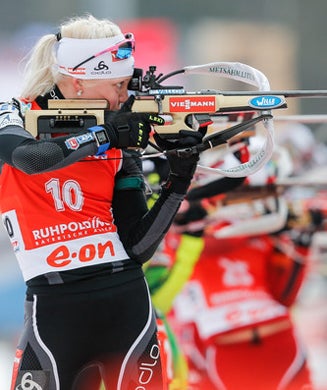 If you have limited time to watch the 2014 Sochi Olympic Games, do yourself a favor and skip the ski jumping and figure skating, and hold out for the biathlon, which starts on Feb. 8 and runs until the 22nd (see the full schedule here). There are a total of 11 biathlon events — five for men, five for women, and a mixed team relay. The cross country skiing aspect of the event is impressive, but tune in for the shooting — it will be some of the best you’ll see for the next four years.

We sat down with Glen Eberle (pictured above), founder of Eberlestock and former biathlete, to gain an inside perspective on the sport. Eberle competed for the U.S. national team for eight years in the 80s and also competed in the 1980 Olympics in Lake Placid. Eberle worked to make guns lighter and was one of the competitors who ushered in a new era of biathlon that was faster paced and a lot more fun to watch.

Each biathlon event is slightly different, but they all require competitors to race around a track and shoot a .22 rifle from standing and prone positions at stands of five targets set at a distance of 50 meters. The targets for the standing position are 11.5 cm in diameter (about 4.5 inches) and the targets for the prone position are 4.5 cm in diameter (about the size of a silver dollar). Depending on the event, a missed shot costs a competitor one extra minute to his time or an extra 150 meters he’ll have to ski as a penalty lap. Top shooters will clear all five targets in under seven seconds from the standing position.

Skiing distances for the event range from 5km in the women’s sprint to 20km in the men’s individual. The top racers will be skiing just slightly slower than competitors in the cross country events — except the biathletes will have a rifle slung over their backs. The top skiers in the world can cover 15 kilometers in under 35 minutes. That’s about 1,000 meters in about 2.3 minutes for all the math whizzes out there.

Why You Should Watch

Biathalon has a huge following in Russia and northern Europe where it was developed as a method for hunting and then later for military patrol.

The biathlon is unlike any other winter Olympic sport because it combines the high-level strength and endurance required for cross country ski racing with the intense concentration required for shooting a small-bore rifle.

“What makes the it so fascinating is that the two sports are diametrically opposed to each other,” Eberle says. “To run your ski race at that kind of speed and get your heart rate up and then have to stop and shoot a gun in the middle of that … it’s crazy.”

To compete at the highest level, racers don’t hold back during the skiing section to keep their heart rate down for the shooting portion of the event. During the competition, a biathlete’s heart rate will push past 170 beats per minute, well into the anaerobic zone and there’s no time to lower the skyrocketing heart rate before shooting.

“The old myth was that a biathlete could stop his heart with his mind and then shoot, but that’s not how they do it. The truth is that you learn to focus and shoot in a way that overlooks the fact that your body is really stressed out,” Eberle says.

Each competitor has his or her own routine to switch modes from racing to shooting. Right before shooting, competitors get their breathing under control (usually with a few deep breaths) and then fire at the bottom pulse of their heart beat.

“Training and proper form obviously help, but not everybody can go out there and do this. You have to find a mental state that will let you ignore the fact that your body is going crazy.”

Hunters are among the select few who might be able to understand what shooting in a biathlon feels like. Being able to shoot accurately under physical and mental stress is a cornerstone in both hunting and biathalon, says Eberle who grew up hunting and shooting in Idaho.

“Anyone who is a really good marksman goes to a place mentally to get it done. How you actually go about doing that … that’s up to you,” Eberle says.

The final reason to watch a biathlon event is for the guns. All competitors shoot .22LR rifles that will put your favorite squirrel gun to shame. According to Olympic regulations, the rifles weigh at least 7.7 pounds, and most of this weight comes from the barrel as the stock is designed to be ultra light. The guns feature a straight-pull bolt with an action that toggles back and forth between the thumb and index finger for maximum speed, and non-optical sights. The sights adjust for wind and light conditions (there’s no elevation adjustment because the range is always 50 meters) by moving the rear aperture. The front site sports a snow guard that protects the sight and barrel.

In the men’s division, keep an eye out for France’s 25-year-old Martin Fourcade. He has a strong chance of medaling in all four of the individual events. For the women, Norway’s Tora Berger (pictured above) is a favorite. The 32-year-old veteran is reportedly in the best form of her career, and won four golds at the 2013 world championships. But don’t sleep on the U.S. team either. On the men’s side, Lowell Bailey had a breakout season in 2012, highlighted by multiple top-10 world cup finishes. He ended the season ranked 14th in the world. Tim Burke is another American to keep your eye on. The top-ranked member of the U.S. team to close 2012, Burke ended the year ranked sixth in the world. He has four career podium finishes, and led the overall world cup in December 2009 and January 2010.

For the women’s event, Susan Dunklee is coming off her first year on the U.S. world cup and world championships teams. She finished fifth in the 15-kilometer individual competition at the 2012 World Championships, missing the podium by just seven seconds, according to TeamUSA.org.