Recreational Shooting: How to Compete in the 3-Gun Heavy Division

The popularity of 3-Gun has turned out a wave of great shooters and spurred new matches across the country. And... 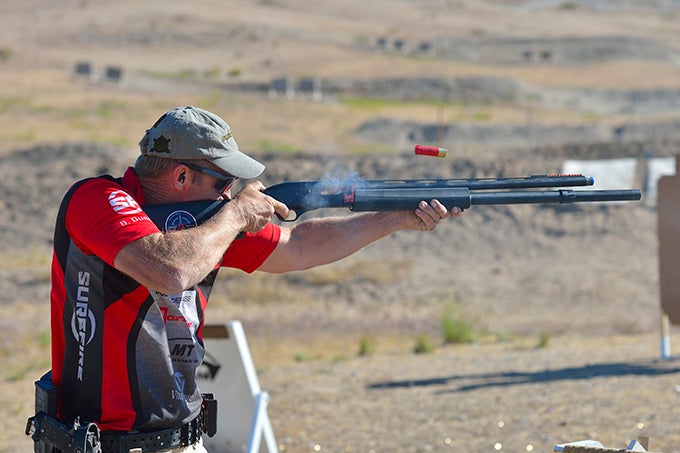 The popularity of 3-Gun has turned out a wave of great shooters and spurred new matches across the country. And right now, Barry Dueck just might be the baddest man on any circuit. Dueck, owner of Dueck Defense, has won his last five consecutive major 3-Gun Heavy Optics division competitions. Unlike the Tactical division, in which shooters use .223s and 9mms, competitors in the Heavy division lug around .308s and .45s (and in some cases the shotguns must be pumps instead of semi-autos).

We caught up with Dueck for his take on competing, and winning, with larger calibers.

Outdoor Life: What makes shooting in the Heavy division so challenging?
Barry Dueck: You know, I didn’t realize it was so difficult until some of the better Tactical division shooters tried to move up and had a hard time. They’d come to me and say, “Man, this is tough.”

It comes down to this: You’re carrying a heavier rifle, you’ve got reduced mag capacity, and there’s more recoil. So, you just get beat up more. You figure that over the course of a match like the MGM Ironman, you’re firing 300 rifle rounds or more. My rifle probably weighs 10 or 11 pounds with the optic on it. Fatigue sets in faster, and with that comes mental mistakes.

OL: What’s the key to dealing with increased recoil?
BD: You’ve got to get behind your gun better and hang on to it more, but the biggest thing is really watching the sights. You’ve got to do what the sights are telling you. You’ve got to let the gun come back on to target—even a fairly close-range target—on every shot. To someone watching, it might seem like I’m aiming once and squeezing the trigger twice (it might be a .2-second split on a close target), but I really am aiming for every shot.

OL: Where do guys start to fall apart?
BD: Competitors at a high level know they can shoot at a certain speed and still maintain precision. But once you’re fatigued, you can’t shoot that fast anymore. So, you’ve got to slow down and get back to basics, squeezing the trigger and letting the shot break. Your subconscious does a lot more work when you’re shooting than most people realize. You’ve got to control that. Just going on instinct and thinking ‘I can power through this’ is going to bite you.

OL: How do you keep your rifle running?
BD: I’ve seen a lot of gun issues in competitions. It seems like there are a plenty of companies out there that figured out how to build good guns in .223, but that’s not necessarily the case with .308. You see a lot more extraction problems and feeding problems than you do in the other divisions. I shoot a minute and a quarter gun (LMT), which doesn’t sound that great, but it’s a minute and a quarter because it has extra space in the chamber to let the thing function when I’m sideways underneath a car and there’s so much dust that I can barely see the target. I run a 16-inch barrel, and I make sure that it’s at least a medium-weight. The super-lightweight barrels have a tendency to shift point of impact when they get hot, which just drives me crazy. Some guys are okay with a point-of-impact shift because they know their gun is doing it, but I’ll always opt for a heavier barrel.

OL: How well do optics hold up?
BD: I’ve broken just about every major brand of scope in the last five years — but I do put more rounds on them than most guys. Scopes on high-volume .308s get a lot of pounding. I don’t abuse my equipment, but I don’t baby it either. So if you can afford a backup scope, it’s good to have.

OL: What are other challenges with gear?
BD: Keeping it clean. When I’m shooting a match, I clean my gear every night. I like the M-Pro 7 Gun Cleaner, and the Slip 2000 Extreme Weapons lube is the best stuff I’ve ever used. I generously lube my rifles. I’m not afraid to have a little oil spitting out of the gun every now and then because what I’ve found is that heavy lubrication will take the sand and grit, suspend it in oil, and move it to places where there’s not tight contact. If you have a dry gun, there’s nothing to move the grit and it tends to jam.

I’m also a big planner when it comes to magazine management. You’re shooting at least 100 rounds, so you’ve got to plan where to put all your shotgun shells, and rifle and pistol mags.

OL: Do you have to be a big, strong guy to shoot Heavies?
BD: No. Dealing with the recoil and fatigue is more of a mental thing. There was a young girl competitor, Katie Francis, who went out last year and beat some of the best guys. That couldn’t have been good for the other shooters’ ego.

OL: Do you think the guys who shoot the Tactical division are wimps?
BD: Ha, no. It’s a just a different tool. When you’re shooting a .223, you can do things faster. When you move up to Heavies, you’ve got to slow down.