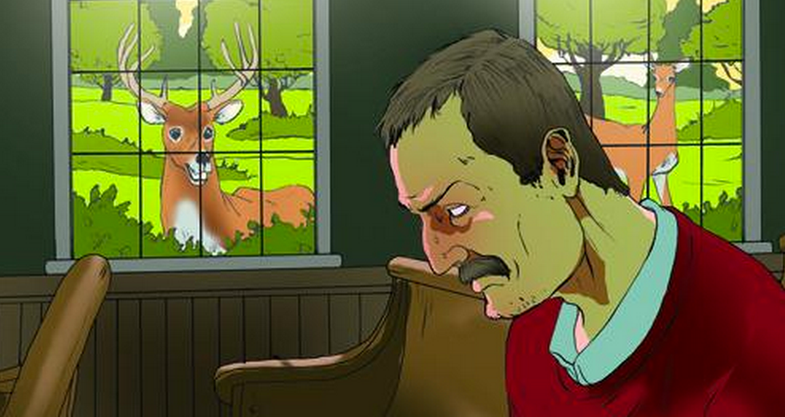 Ferguson, Mo., police have been evaluating a new muzzle attachment called “The Alternative” on their firing range since February. It is a metal alloy ball that fits over the muzzle of a handgun that turns the first fired bullet into a Ping-Pong ball-sized projectile, designed not to kill.

“It’s something we’re testing for ourselves and seeing if this is even something feasible or reasonable to use for law enforcement officers,” Mayor James Knowles told CNN in February.

In an April 1 editorial, the USA TODAY called on law enforcement agencies to be more amenable to incorporating more non-lethal weapons into their arsenals. Non-lethal alternatives include stun guns, pepper spray, tackling a suspect or simply talking him down from an agitated state, the paper’s editorial board writes.

The USA TODAY said the recent spate of reported killings of unarmed suspects by police could actually be under-documented because police departments are not required to report lethal-force incidents to the FBI. Therefore, the FBI cannot accurately track lethal-force incidents. The FBI’s most recent yet undeniably flawed count identifies 461 justifiable killings by police in 2013. Independent efforts to track killings through news accounts have found about 1,100 a year, according to USA TODAY.

Sturm, Ruger & Co is among firearms manufacturers that are developing a growing array of non-lethal firearms specifically designed for law enforcement.
“Gun manufacturers realize that, while law enforcement officers put their lives on the line every day, not every situation they encounter requires the use of a lethal weapon. In light of that, some manufacturers, like Sturm, Ruger & Co., offer non-lethal alternatives that officers can use in less-threatening situations,” the company said in a recent press release.

Stun guns have been around for a while, but “The Alternative” is a relatively new concept, according to Christian Ellis, the CEO of Alternative Ballistics, and the device’s manufacturer.

“The Alternative” took nine years to develop, Ellis said, noting a retired sheriff’s deputy initially designed it. “He did not like the fact that people were being shot when the officers do have time (to consider options) but they had no other option in lethal force,” he told CNN.

The device is not without critics. It could put an officer’s life in danger, some say because it would require 3 or more seconds to place it over the muzzle. Often, critics say, officers only have a split-second to make a decision, such as when a suspect pulls a gun.

“Second-guessing police in dangerous situations is, of course, a tricky business,” USA TODAY says in its April 1 editorial. “Cops die, too, in these unpredictable, split-second encounters.”

So, what is the biggest obstacle to effective and safe use of non-lethal force, according to USA TODAY? “Police too often are poorly trained in the use of non-lethal force and how to deal with mentally ill suspects. Police departments hire people who don’t have the right temperament. And police are rarely held accountable for questionable shootings.”

Expand police use of non-lethal alternatives: Our view

The North Carolina State House on April 28 granted final approval to an amended House Bill 640, called the “Outdoor Heritage Act,” that will allow hunting with firearms on Sundays. The bill, if approved by the Senate, would take effect Oct. 15. It applies only to private lands.

North Carolina is one of nine states that prohibit or restrict Sunday hunting on private lands “due to antiquated ‘blue laws’ dating back to the 1700s,” according to the NRA.

Counties with populations of more than 700,000 residents—Wake and Mecklenburg counties—are exempt. Under the bill, landowners, family members, or someone with written permission from the property owner could hunt with firearms on Sunday on private land. It would still prohibit hunting migratory waterfowl, hunting deer with dogs, and hunting within 300 yards of a church or other place of worship on Sundays.

“While hunting is restricted in North Carolina, other activities such as fishing, hiking and target shooting remain perfectly legal on the seventh day of the week,” the NRA said in an email. “Between work, school and other obligations that occur throughout the week and on Saturdays, Sunday hunting bans work to discourage hunting at a time when hunter recruitment and participation must be encouraged in order to save our hunting heritage.”

The NRA said allowing hunting on Sundays will help local businesses, as well as “cash-strapped rural counties. Every day that hunters are in the field, they spend money on fuel, food, lodging and dozens of incidentals that go along with a day’s hunt.”

The NRA is issuing a legislative alert to North Carolina gunowners to rally against HB 801, which would take away a person’s right to possess a gun or ammo if someone has taken out a civil “no-contact” order against the person.

“Sometimes the cure is worse than the disease,” the NRA writes. “Such appears to be the case with HB 801. It is the classic liberal ‘we’ve got to feel like we’re doing something to help’ when actually what they are doing is making a blow against law abiding citizens’ fundamental rights —such as their Second Amendment rights.”

According to the NRA, the bill takes away a person’s right to possess a gun or ammo if someone has taken out a civil “no-contact” order against the person.

The NRA writes that House Bill 801, if enacted, would go beyond current law in requiring anyone with a Civil No-Contact Order filed against them to surrender their firearms for the duration of the order, and prohibit them from even touching any firearms or ammunition. Civil No-Contact Orders may be filed by virtually anyone, not only those in a domestic relationship.

“These orders are not the same as Domestic Violence Protection Orders, which include due process before one may lose the constitutionally protected right to possess firearms,” the NRA writes. “Civil No-Contact Orders can be issued ex parte, which means the person the order is filed against may not be present in order to challenge the order’s validity.”

New Hampshire House to vote on changes to gun laws

Both lawsuits will essentially remain in limbo until the Commonwealth Court rules on Act 192, the Pennsylvania law that took effect in January that gives people and organizations, such as the NRA, the ability to sue to overturn the local gun laws.

Pennsylvania has long had a state law that bars municipalities from approving ordinances that regulate the ownership, possession, transfer or transportation of guns or ammunition, although many local governments–such as Philadelphia and Pittsburgh—passed their own gun laws anyway. Act 192 provides a litigative option to ensure state law and the U.S. Constitution are followed. Act 192 is being challenged, but Carpenter’s ruling says the NRA, for now, has the right to sue Philadelphia.

Philadelphia, Pennsylvania, sued by NRA along with 2 other cities