As Magnet Fishing Booms, More Guns Are Being Pulled from America’s Waters. Can Magnet Fishers Legally Keep Them?

The answer is more complicated than you might expect 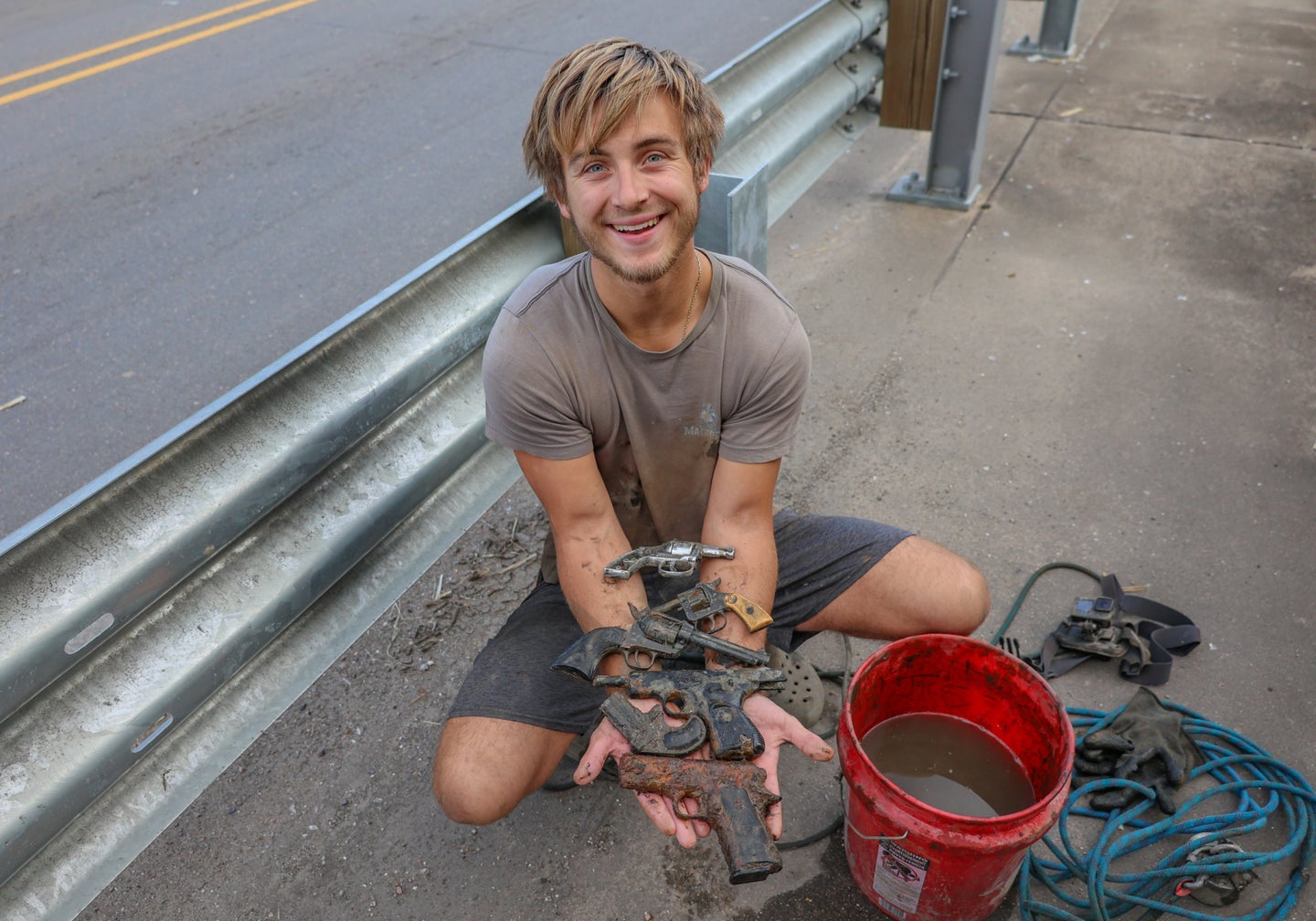 Bryce Nachtwey, 21, seems to come across a gun in almost every one of his popular magnet fishing videos. Bryce Nachtwey
SHARE

If you don’t believe me, take a dive into magnet fishing YouTube and feel the hours disappear. Enthusiastic treasure hunters pace back and forth on bridges and cast shiny hockey puck-sized magnets into murky depths, pulling in bike parts, railroad spikes, jewelry, coins, and, yes, firearms. Nachtwey’s YouTube channel, Outdoors Weekly, features long, energetic videos of his exploits for his 626,000 subscribers.

It’s a rare video when Nachtwey doesn’t pull a gun or two out of the water. He recently hauled six handguns out of a river in Louisiana, three of which were zipped in a bank deposit bag. But that doesn’t make Nachtwey uniquely good at this hobby. For magnet fishers across America—a fast-growing group—guns are among the most common type of catch. But even though they’re seemingly ubiquitous, they aren’t treated as such. In fact, the pistols, rifles, and shotguns are usually the headlining finds of magnet fishing content.

But there’s a discernible pause in some of these videos after the angler pulls the gun off the magnet and holds it up in front of the camera. You can almost hear them asking, silently: Now what? Magnet fishers generally operate under the common law principle of abandoned property—better known as “finders’ keepers”—which allows a discovering party to claim abandoned property legally.

But does that finders’ keepers principle really apply to a found gun?

This question is a legal onion (so much so that the Department of Alcohol, Tobacco, and Firearms, Cornell Law School, and several other legal experts that I contacted had no comment or insight to provide for this story.) At the very core of all the layers lies the issue of claiming abandoned property.

While finders’ keepers generally holds up to some legal scrutiny, many states have abandoned property laws of their own. These rules might determine how long something must be left behind by a previous owner to be considered abandoned or they might require that property of a certain value be turned in. Since the very essence of magnet fishing is claiming abandoned property (and posting videos of that property to the internet), knowing these laws is important.

But that’s easier said than done. South Carolina is the only state with any specific laws against magnet fishing. The Underwater Antiquities Act makes it illegal to harvest any archaeological artifacts from state waters without a license, which the State only hands out if they feel the excavation is in their best interest. (Magnet fishing private waters is still unregulated.)

So assuming magnet fishers aren’t hauling guns out of South Carolina waters or breaking any state laws regarding abandoned property, they must next consider criminal law. Nachtwey calls the cops pretty much every time he finds a firearm to avoid accidentally obstructing an investigation, tampering with evidence, or being a general roadblock to justice.

North Dakota criminal defense attorney David Dusek considers this conundrum a question of moral obligation versus legal obligation. Is there a legal obligation to turn a gun in? Not necessarily. Nachtwey’s morals tell him it’s the right thing to do, but as Dusek says, “you can’t legislate morality.”

“If I find a gun, I’m taking it to the police to find out if it’s a part of a crime,” Dusek tells Outdoor Life. “But if someone finds a gun, cleans it up, and doesn’t turn it in, is that legal? Probably. You don’t have to call it into police. You found it.”

Serial numbers are usually visible on guns that were either bagged or haven’t been in the water for much time. But it doesn’t take long before the gun starts transforming into a mossy, untraceable blob of rust. The longer it sits at the bottom of a lake or river, the less useful it will be in an investigation. Many of the guns that magnet fishers find are beyond recognition, which raises another question: at what point of decay does a gun stop being a gun?

Assuming the gun is still in restorable condition and doesn’t trace back to any criminal activity, the final layer of the onion involves firearms law. Does the state require all handgun owners to have a permit? Is the magnet fisher of legal age to own that firearm? Would they pass a background check?

Much like other outdoor activities, the magnet fishing trend seemed to take off in the United States during the COVID-19 pandemic when people were looking for things to do outside. Many magnet fishers are former anglers who grew tired of fishing long hours without getting any bites. Magnet fishing equipment is relatively cheap, the practice is simple, and access is pretty easy to find.

The cherry on top is cleaning all this junk out of America’s waters, especially for Nachtwey and his crew as they travel around the country with the goal of hauling in 1 million pounds of scrap. Social media has played a huge role in spreading the word about the practice. YouTubers advertise magnet brands and offer discount codes to their viewers. Even Nachtwey has YouTube to thank for his obsession.

“There was one [magnet fishing] video on YouTube at the time. It was around Christmas when it was uploaded. Then my mom bought me a magnet for Christmas,” Nachtwey recalls. “I was already making fishing videos at the time, and I made a magnet fishing video and instantly fell in love with it. Everyone seemed to like it. That was about five or six years ago now…and I’ve been doing it pretty much every day since.”

Facebook groups have also helped grow the magnet fishing community. The two biggest groups have each have more than 20,000 members, and some groups are dedicated to individual states or regions. Member discussions range from questions about equipment to crowdsourced identifications of the rusty bits and pieces people find.

What to Do If You Find a Gun While Magnet Fishing

As the hobby continues to grow, more guns, ammunition, explosives, and other potentially hazardous finds will likely surface. Nachtwey hopes it will become standard practice for the magnet fishing community to call the police after finding a gun and that police will start engaging more with what could be evidence in criminal investigations.

“I’ve worked with so many police departments, and a lot of them don’t even care. I’d say 98 percent of the time that we turn in a gun, it doesn’t get processed or they don’t try to piece anything together,” Nachtwey says. “It almost seems like a chore for them, and it’s kind of sad.”

There are a lot of ways that keeping a gun found while magnet fishing could lead to legal trouble. That’s why most of the magnet fishing videos on YouTube that involve found firearms end with a call to local police. But even calling in weapons can lead to trouble. In fact, a call to authorities ended in a citation for Nachtwey and his friends for trespassing on military property after hauling in piles of explosives from Georgia’s Canoochee River on June 24, 2022. But those citations were eventually dropped.

Police responses vary. Sometimes they take the guns, like they did with the six Nachtwey found in Louisiana. But sometimes they leave the guns in Nachtwey’s possession, no questions asked. In terms of best practices or a recommended standard procedure for magnet fishers who find guns, Dusek says it’s a head-scratcher.

“I don’t know if there really is one. You’ve got competing interests between legal and moral obligations,” Dusek says. “Can you possess a gun? And if you’re not allowed to possess a gun, is what you find considered a firearm for possession purposes? If it’s all rotted out and doesn’t have the characteristics of a gun, is it a gun anymore?”

The worst thing that could happen after calling the police to check out the firearm is that they take it away for processing. In many instances, police have even returned firearms to the magnet fishers after the guns don’t trace to any investigations. Dusek paints a daunting alternative to being proactive, especially if you are underage, a convicted felon, or don’t meet state requirements to possess that specific gun.

“Think about it: If I can’t legally own [that] firearm, I could go to jail,” he says.

But as the population of magnet fishers continues to grow across the country, more people will end up in legal possession of old weapons that the original owners lost or tossed. Even when there’s no legal obligation to turn in a gun, Nachtwey still encourages magnet fishers to do so out of moral obligation.

“It’s the right thing to do,” Nachtwey says. “If it was used in a murder and that was the one piece of evidence they were looking for, I’d rather help bring closure to the family than have something hanging up on my wall.”