When Raymond Goebel, Jr. spotted a tan-colored animal slinking through the eastern Iowa woods, he naturally thought it was a... 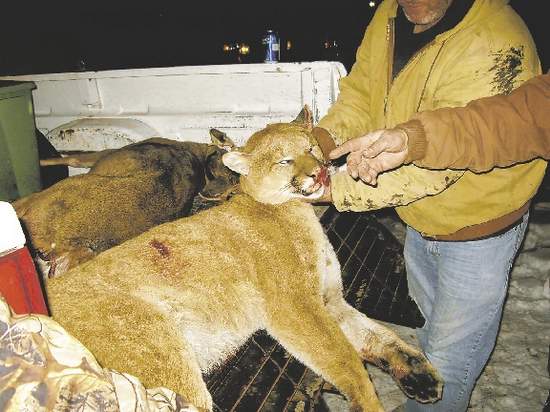 When Raymond Goebel, Jr. spotted a tan-colored animal slinking through the eastern Iowa woods, he naturally thought it was a deer.

Goebel was deer hunting, after all, and the woods around Marengo, southwest of Cedar Rapids, are full of whitetails. But when he pulled up his rifle and looked through his scope, he spied an animal that is making a slow but sure comeback from the Great Lakes to the Great Plains. It was a mountain lion.

After verifying the identity of the lion with a hunting buddy, Goebel reportedly contacted the landowner and secured permission to kill the cat, according to an account in the Omaha World Herald (www.omaha.com/article/20091216/SPORTS07/712169884).

According to officials with Iowa’s Department of Natural Resources, Goebel’s cat was only the fourth killed in the state in the last decade. Because they were considered extinct when Iowa’s game laws were ratified, mountain lions have no legal protection in the state, so Goebel didn’t require any special license to kill or possess the cat.

Goebel’s experience may be rare, but it’s becoming more common as mountain lions move into parts of the country where they haven’t been seen since the Civil War.

Just last month in Michigan, officials with Department of Natural Resources confirmed that the image captured in October by a trail camera in the eastern Upper Peninsula was that of a mountain lion (www.miningjournal.net/page/content.detail/id/535795.html?nav=5006).

That is big news, as state officials have for years rejected the existence of mountain lions in the Wolverine State. But biologists who returned to the site where the remote camera was located confirmed cougar tracks, and two additional sets of lion tracks were verified elsewhere in the U.P. in early November.

Goebel’s lion was a male, and it may be that the Michigan cougars are also males traveling widely to find a mate. Without females in the nascent population, cougars can’t be considered established.

Still, the landscape is ripe for the return of mountain lions. White-tailed deer populations are large and growing across much of the Midwest, large swaths of farmland are depopulating as production agriculture requires fewer farmers, and habitat programs such as CRP and Wetlands Reserve Program have created secure cover for predators and prey alike.

That lion-friendly mix of conditions has brought the big predators back in the last year to sections of Kansas, eastern Nebraska and northern Missouri. Where the next lion sighting will occur is anybody’s guess, but my bet is that we aren’t far away from seeing females and litters of young cougar kittens in previously unthinkable places.