“They have to be within 200 yards now,” I whispered softly to my son as the thick forest below our... 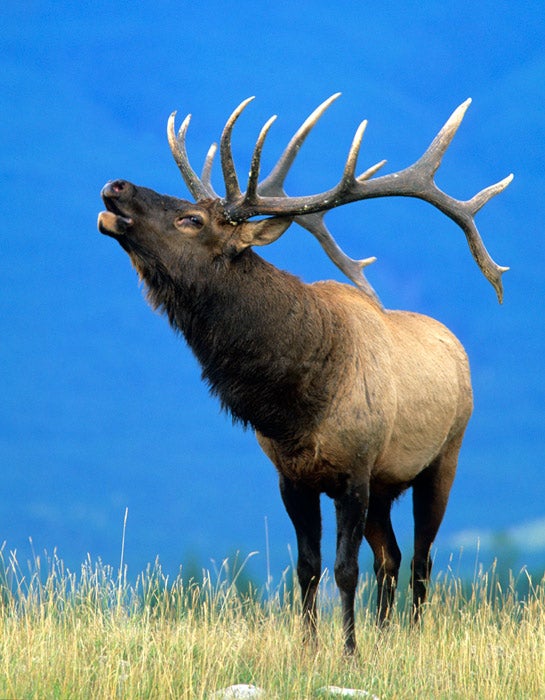 “They have to be within 200 yards now,” I whispered softly to my son as the thick forest below our sagebrush knob blew up with elk bugles and the mews of cows trying to control the chaos. At least two bulls screamed at each other in throat-stinging threats. If I’d been dropped into the site without a clue, I’d have bet the September rut was in full swing. But I’d have been wrong. It was October.

We were mule deer hunting and could only listen to the shrouded show, but the performance provided insight for a future hunt.

Bull elk use bugles as a form of advertisement that escalates as cows become more active in combination with herd estrous cycles. It’s a sure signal that September has arrived in elk country. Biologists theorize that the bugling helps bulls wrangle herds and, more important, intimidate lesser bulls. In short, mature bulls bugle more in an unmolested environment. Hunting pressure, weather, and herd makeup can restrain bugling, but if the cows are active and still cycling, you can expect at least some bugling. On average, cows come into heat every 21 days until they are bred. After the winter solstice, estrus becomes irregular and eventually ceases, but until then you have the opportunity to use bugles as a clue to herd whereabouts.

Whether you’re still toting a bow or have swapped it out for your centerfire, elk country can be a very lonely place in October if the elk decide to clam up and become anti-social. Although not a guarantee (what in hunting is?), using a bugle even after traditional bugling time is over can cause a bull to respond. Use September calling protocol as an October plan of attack. First, move to high ground at dawn and dusk to bugle. Elk are more active in low-light periods, and the elevated position allows your call to resonate farther. Plus, you’ll have a better opportunity to catch a distant response or a soloist bull.

Don’t get fancy with your calling technique. A single bugle without the chuckle impersonates a young bull looking to join a herd or challenge the herd master. Add cow mews afterward and you could irritate a nearby bull, making him believe a youngster has a herd and may still be tending estrous cows. Don’t overcall, but make sure your cow calls suggest yearning.

“Did you hear that?” my buddy asked on a late-season hunt years ago. I hadn’t, but he marked the bugle and off we went to tag my best bull ever. It was the day before Halloween and the bull had sounded off once, giving away his position and the position of another bulky bull and a herd of cows. That one bugle made the hunt, and if my partner had missed it, I never would have scored. Don’t let a single bugle escape your attention.

It pays to hunt slowly and stop often to listen for a bull during October, when bugling could be as frenzied as a rock concert or as discreet as a church whisper. As on my hunt, having a partner along can increase the chance of hearing a lone bugle and marking it for inspection.

How far bugles carry depends on the terrain and atmospheric conditions. Timber tends to muffle bugles, so be prepared for a close encounter soon after hearing a bull. Open terrain allows bugles to sound closer than they are. Look in the distance for a bull bugling from a ledge or across a canyon in an open park. Use your map to find terrain a herd could use as cover.

Don’t get caught up in the entertainment of calling. By this time of year, most elk have been pressured by hunters blowing their lungs out on manufactured calls. Match their response and don’t ramp up the conversation unless they intensify the challenge first. Calling too much could cause a bull to withhold a response.

Although your calls may lure a bull into the open, October calls should be thought of first as a locating tool to increase ambush success. If the bull continues the chatter and closes the distance, then by all means add to the conversation.

While hunting the Colorado high country with veteran guide Jesse Bauer a couple of seasons back, we did just that. Bauer’s calls sparked an October bull into a windy discussion, and the increasing decibels indicated the
bull was paralleling our position. We hustled over to a small opening ahead, and just as we settled up against an ancient spruce, the bull stepped into an October bugling trap.