Illustrations by Kyle Fewell While hipsters would like us to believe that they invented the demand for organic, free-range, locally... 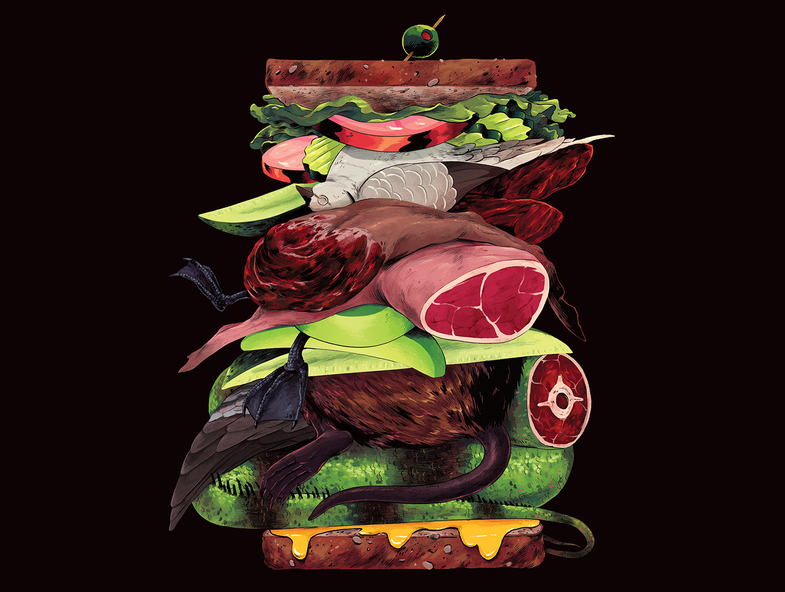 While hipsters would like us to believe that they invented the demand for organic, free-range, locally sourced meat, hunters know better. The best source of natural protein doesn’t come from a store, and meat doesn’t need to be pumped full of antibiotics and hormones to be delicious or affordable. This year, make a resolution to augment your food supply with more venison and wildfowl. You can even go beyond the standard hunter’s fare if you dare.

There’s a wide range of delicious wild game available for hunter-gatherer types, especially if you’re willing to turn to somewhat unconventional sources of protein. That may mean you obtain your dinner by taking down an iguana with a pellet rifle, staking out a grain bin for some feral pigeons, eating what appears to be a giant swamp rat, or maybe even stopping along the road to pick up a freshly killed whitetail doe.

Our ancestors would roll their eyes at our collective unwillingness to use any protein source we find unfamiliar, but we think the following list would make them proud. And hungry.

You may not immediately associate the Florida Keys with high-volume hunting. But if you have a pellet rifle and some space in the freezer, consider taking out a few green and spiny-tailed iguanas in the name of conservation. Despite their creepy cretaceous-period facade, iguanas have a rich white flesh that is considered a delicacy by many.

“Hard freezes in 2010 killed off much of South Florida’s invasive iguana population and the populations of many other invasive species,” says iguana hunter Terry Gibson of North Swell Media. “But iguanas are back, wrecking gardens, undermining canal banks, and devouring native bird eggs, insects, and plants. There’s still time to eat our way out of this situation. Where discharging a firearm or an air rifle is legal, aim for the ear hole with a .22 or high-powered pellet gun. In urban and suburban areas, bait Havahart traps with hibiscus flowers or fruit. Euthanize trapped iguanas in a chest freezer or with a sharp machete. Just remember, though, that those spiny tails swing fast and can hurt you.”

According to Gibson, iguanas make excellent table fare. “Treat the meat just like you would frog’s legs or a gator tail. It’s delicious fried, grilled, or slow-cooked in the oven. The meat takes on the flavor of whatever you choose to marinate it with. Acidic citric sauces and white wine help tenderize the meat. Marinate under ice to keep it cold.”

These birds were escapees from an aviary in the Bahamas in the 1970s. They then flew on to Florida, and have since spread across the country. States like Idaho and Colorado allow hunters to harvest Eurasian doves in any numbers at any time, so long as they have a valid hunting license. (You’ll need to leave the birds unplucked during transport so they will not be mistaken for mourning doves.) One area where you’ll find a lot of collared doves and plenty of landowners willing to allow you to shoot them is Colorado’s Front Range, an agricultural heart of the country where these invasive doves are thriving. Here, they are considered to be a pest and likely compete with mourning doves and other native bird species for habitat. They are a third larger than mourning doves.

A great deal of the prime whitetail property in Texas is leased or privately held, but the Texas Parks and Wildlife Department allows hunters on properties enrolled in its Managed Lands Deer Program to harvest a certain number of cull bucks and does. This means that a single ranch may have an allowance of dozens or even hundreds of does and young bucks, and property managers are often willing to allow hunters to harvest some of their management deer for a very reasonable cost. The price per deer varies from $50 to $500, and some property managers expect hunters to pay for room and board while hunting, but it’s still a great low-cost, action-packed hunt. Most of the properties in the Managed Lands programs have plenty of deer, so you’ll see game every day, making this a great hunt for kids. These hunts are usually very short—often just a day or two—so you won’t have to burn all your winter vacation days. In addition, the warm Texas winter is a welcome reprieve for snowbound hunters from farther north. Aside from having the opportunity to take several whitetails, you may also be able to harvest wild hogs on many of these hunts, sometimes at no additional cost.

Snow, blue, and Ross’ geese, known collectively as “light” geese, are causing major problems for farmers along the Mississippi Flyway. Equally alarming is the rate at which they are degrading the Arctic and sub-Arctic tundra areas upon which dozens of other waterfowl species depend. To combat this, a U.S. Fish & Wildlife Service’s order allow hunters more freedom and greater bag limits.

“You can use electronic callers and extended magazine tubes,” says DU’s Chris Jennings, who also points out that no bag limits allows you to fill your freezer in a hurry. “You can basically start hunting light geese in Louisiana and follow the migration north.”

When it comes to his favorite goose recipe, Jennings says the first 20 or 30 pounds of meat are always dedicated to making sausage. But he also likes jerky and says that several other hunters in his area turn snow geese into andouille sausage, a delicacy of the flyway.

Feral hog populations are found in all 67 Florida counties. And as their numbers increase, so do conflicts with farmers, ranchers, and even suburbanites. Florida has a policy that allows private landowners to grant permission to hunt hogs on their property year-round. No hunting license is required, and there are no bag limits or age restrictions. Young hogs provide wonderful meat, and every pig you harvest helps control the booming population. Plus, winter is the ideal time to find a pig during the day.

“Cooler weather gets hogs up and moving during daylight hours—especially those big trophy boars,” says T.R. Lewis of Black Tine Outfitters near Ocala. And, Lewis says, Florida hog hunts are very affordable—oftentimes less than the cost of a plane ticket.

Of course, Florida is just one option for wild-hog hunting. Pigs are considered nuisance animals in other states, including Texas, Georgia, Mississippi, and Louisiana.

My father says there are two kinds of people: those who have hit deer, and those who will hit deer.

I entered the second group while driving home to Missoula, Mont., after a weekend at my parents’ north-central Montana farm. The entire incident—from seeing the whitetail doe sail over the barbed-wire fence along the highway to the impact with my car—took less than a second. But the guilt I felt at unintentionally taking a deer’s life stayed with me even longer than the significant dent in my vehicle’s body.

Luckily, I had a way to ease my conscience: by utilizing the meat from the deer. In 2013, Montana’s state legislature passed a law allowing the Fish, Wildlife & Parks Department to establish the Vehicle-Killed Wildlife Salvage Permit. Because of this provision, I was able to take that doe, whose body sustained only minimal damage, and butcher her when I got home.

I’m not the only remorseful driver who has taken meat from road-killed game. Two years into the program, Montana FWP has issued almost 1,650 permits. More than 1,000 were used on whitetails, 281 on mule deer, and 276 on elk. Sixty-one moose and 11 antelope have also been legally salvaged. Sixty-five percent of these salvaged animals were classified as “found by roadside.” The remainder were designated “hit by my vehicle.”

In Montana, permits can only be issued for deer, elk, moose, and antelope. Idaho allows drivers to salvage black bears and bighorn sheep in addition to more common big-game species. In Ohio, anyone wanting to legally salvage a deer is required to obtain a “carcass receipt,” but the numbers are not tracked statewide. Louisiana and a handful of other states require game wardens to inspect the carcass before the motorist can take possession, verifying that the animal was killed by a vehicle and not some other means. Salvaging roadkill is prohibited in California, Oregon, Washington, Nevada, Texas, and Alaska.

Early autumn is a great time to chase elk. The weather is usually mild, there’s little snow, and the bulls are bugling. Winter, however, might offer better odds of filling the freezer with venison. After the first serious snowfall, elk begin concentrating in winter pastures, and it’s easier to set up on a food source than to pull a herd bull away from his harem. Plus, you’ll find that many ranchers have tags and are willing to offer short hunts at a bargain price.

“Hunters can get a cow on a two-day hunt, and our success rate has been 100 percent,” says Jim Fauver of Castle Valley Outdoors in Emery, Utah. Castle Valley offers ranch permits for cows, so there’s no draw, and Fauver says that you can expect to see herds of 30 to 300 animals in their wintering areas on the ranch.

Tyler Willis of Timber Canyon Ranch in Wyoming agrees. “A cow elk hunt is an affordable way for friends and family to get together and enjoy themselves on a laid-back, late-season Wyoming hunt,” says Willis. “Over-the-counter licenses make this hunt a great opportunity to bring elk meat home season after season.”

In the 1930s, large, brown, rat-like furbearing rodents called nutria were introduced into Louisiana from Argentina as a potential source of profit for local trappers. However, when the fur market went into a rapid decline in the 1980s, nutria became a nuisance that destroyed coastal wetlands. Today, these prolific rodents can be hunted along the coastlines of Louisiana. And at 15 pounds each, they provide an ample source of protein.

“Nutria are responsible for thousands of acres of marsh and delta destruction in Louisiana,” says Capt. Jeff Dauzat of Fin and Feather Guide Service in Louisiana. “They eat plant roots and tubers—when there’s no root systems, there’s no marsh.”

Dauzat says that the crash in nutria fur prices has reduced the incentive to hunt these invasive rodents, but Louisiana is offering a bounty system.

Dauzat says that since the nutria have no natural predators except alligators and humans, the bounty system is the only thing that keeps populations in check. But, he says, if more people knew just how tasty nutria are, there might be more hunters.

“Nutria are good to eat if prepared properly. I have had nutria chili, sauce piquant, and burritos.”

You can hunt nutria by stalking riverbanks and levees with a .22 rifle. But if you want to really load up the freezer, hire a local captain to take you out into the swamps to up your odds of success.

Feral pigeons adapt well to human habitation. As a result, city streets and farms are plagued by these large members of the Columbidae family of birds. For Neal Hunt, president of Soar No More decoys, hunting pigeons has become a way of life.

“Why should people hunt pigeons? It’s the most fun wingshooting anyone could do in the off-season,” says Hunt. “Pigeon hunting is duck hunting times 10. No season, no limits, and no plugs, and the birds decoy just like mallards in a pothole. You’re not fighting for spots in the morning, and you’re not freezing your butt off. What more could a bird hunter want?”

Hunt also says that pigeon hunting is a great way to introduce kids to the sport. And it’s a great warmup for waterfowl season—shooting more than a hundred birds over decoys is perfect training for your retriever—or cool-down once game seasons come to an end.

Pigeons are an underrated source of natural protein, according to Hunt. “Taste just like dove. If you love eating doves, you will like pigeon. It’s practically the same.”