At the risk of offering cockamamie advice that’ll get readers in trouble with their spouse or ruin a perfectly good... 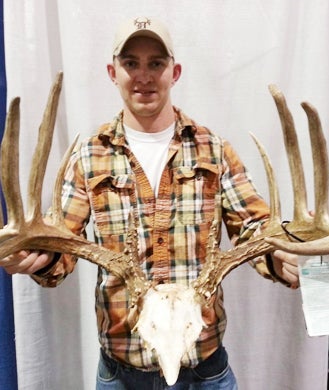 At the risk of offering cockamamie advice that’ll get readers in trouble with their spouse or ruin a perfectly good friendship, I propose one piece of sage counsel: Never resist the urge to go deer hunting.

Before you brusquely throw me out of the fickle court of public opinion, I submit to you exhibit number 182 1/8, which is the Boone and Crockett score of Michigan’s new archery state whitetail typical record. The exhibit is presented by Robert Sopsich of Milford, Mich., who illustrates another oft-repeated hunting adage: Always be prepared.

On the afternoon of November 2, Sopsich was planning to go bowling with some buddies. His younger brother Donny Sopsich suggested the two should go hunting before knocking down some pins. Being late in the day, the elder Sopsich wondered if they’d bump more deer than they’d see, but Donny reminded him that it was the heat of the rut and they shouldn’t miss the opportunity. To sweeten the deal, Donny offered to let Robert sit in his stand, where he’d already taken a nice eight-pointer.

Robert gave in to his brother and headed for the stand. Instead of taking the usual path to the stand, Robert walked along the far side of a stand of pine trees in hopes of not bumping deer.

“I looked to my left and I saw the buck walking across the field, quartering away from me,” explained Sopsich. “I [already had an arrow] nocked, so I was ready for the shot.”

Aiming for the top of the buck’s back, Sopsich took one last look at the deer’s rack before looking through his peep sight.

That’s when he made his only mistake. Adrenaline sucker punched Sopsich and he was overcome with buck fever for a split second. Refocusing, he let the arrow go.

“Watching the arrow felt like forever,” added Sopsich. “I heard a thud and the deer took off running. I didn’t see if I’d hit him or any blood – I was just hoping.”

Sopsich texted his brother that he’d just shot the 12-pointer they’d seen on a trail camera photo. Donny was busy helping to find a buck his neighbor had just arrowed. Both brothers joined in the tracking job and found the neighbor’s deer.

That’s when the rain started to come down.

“My neighbor wanted us to help him load and haul the buck out, but I just told him that we had to go,” Sopsich said.

After going back to where he’d shot his buck, the Sopsich brothers started carefully tracking the deer. The buck made a beeline across a field, dying 400 yards from where it’d been shot.

Sopsich’s preparedness made the difference between taking down the Michigan state archery record and just watching it waltz by. He also knows he owes his brother Donny a beer the next time they go bowling.

“If it wasn’t for my brother, I wouldn’t have even gone hunting.”

The Sopsich buck was officially scored as the new Michigan state record buck last month. The deer has 12 points and boasts a 19 1⁄8-inch inside spread. The main beams measure 26 4⁄8 and 26 3⁄8 inches, and the longest tine is 11 inches. It beat the previous record buck (shot by Mitch Rompola) by 2/8 of an inch.