Lady Killers: The Evolution of Hunting Does

We look back to a time when it wasn’t considered fair for deer hunters to kill the fairer sex—and how  that belief has evolved over the years. 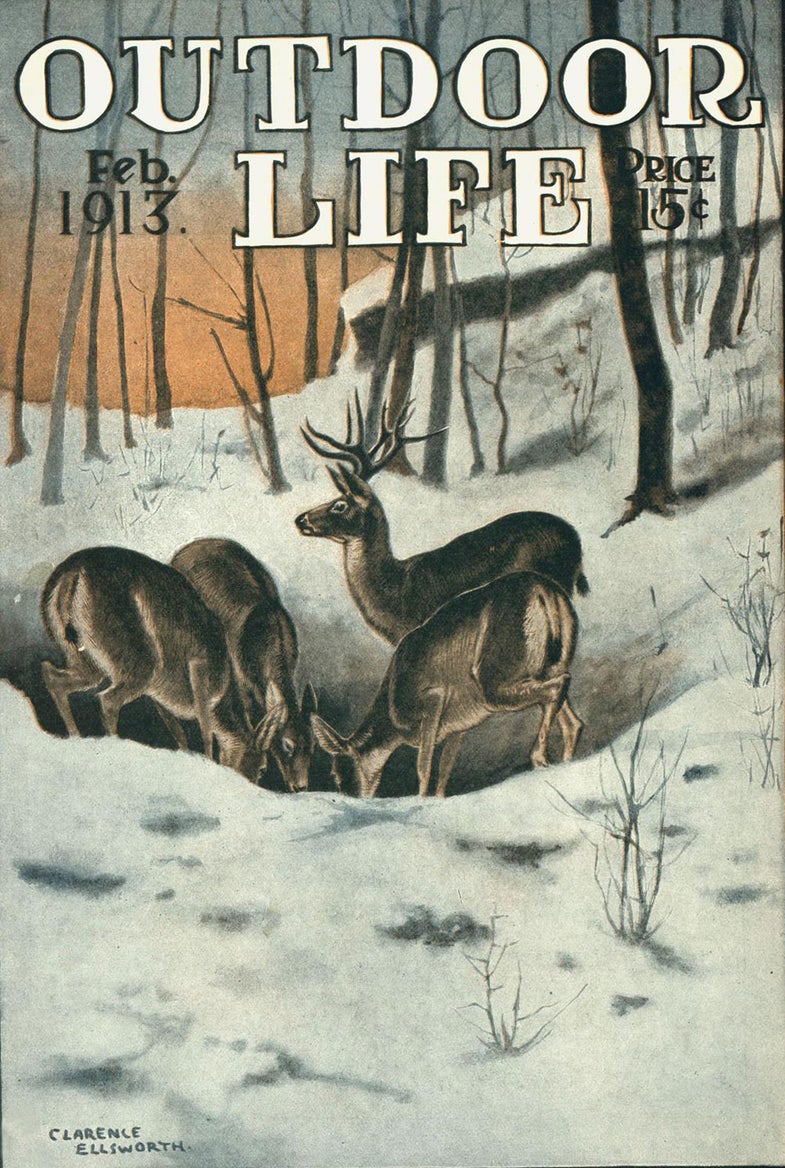 The articles referenced here are unsigned editorials published in the pages of Outdoor Life over the years. You can find all these original editorials, and more, in our archives at c2c.outdoorlife.com.

Deer populations at the turn of the 20th century were at an all-time historical low in North America, so it follows that our editors were wary of regulations permitting a doe harvest. They wrote a short but impassioned editorial against the practice, which had been proposed and enacted in some regions to avoid the “decimation” of bucks.

Their position was sound at the time, but for some reason they further concluded that legal doe hunting would lead to runaway poaching from the majority of normally law-abiding hunters:

“In this we believe our fellow sportsmen are very wrong. It is an easy matter to kill a doe, and even a much easier proposition to cover up the work. There is no part of the animal which one would keep as a trophy, and therefore when the meat is eaten all evidence of the killing of the animal has been destroyed. This means that if the hunter is allowed one animal of either sex and kills the doe first, in most cases he will kill a buck, too, if he gets a chance. It means with the majority of hunters, the killing of two animals where now only one would be taken”

“The open season for deer is now at hand in many parts of the country. In fifteen states the law allows both bucks and does to be killed. In all other states does are protected at [sic] all seasons. Since the does as a rule average less in weight than bucks of the same age, killing a doe instead of a buck usually means considerably less meat. Furthermore the supply of deer will not increase if the breeding stock is killed off. The rapidity with which deer increase when does are protected is shown by the experience in Vermont, Pennsylvania, and other states, and a doe spared this fall means at least one more fawn, as well as one more doe, next spring. A fawn left without a mother this fall with have more difficulty in withstanding the rigors of winter.”

The controversy surrounding a new regulation rippled across the U.S. in 1929 and the following decades. We published a point-­counterpoint from key players on a doe-only deer season in Pennsylvania. We noted that while OL has “stood traditionally against the killing of any female members of the deer family,” the problem presented by the overabundance of does was “too intricate to be settled without the full knowledge of the facts.”

We even printed a ballot for readers to fill out and mail in. The results of our informal survey, reported in the March 1929 issue, showed 72 percent of Pennsylvania hunters were opposed to killing does, while 28 percent were in favor of it.

OL’s editors were finally sold on the matter. We explained that although doe harvests were previously not needed, they had become critical:

“While deer were being re-­established…game departments, sportsmen’s magazines, and outdoor columnists greatly oversold the idea of taking only bucks and leaving the does to replenish the herds…You cannot stockpile deer, or other game, as you do corn, wheat, and hay.”

We also supported state agencies as they fought the stigma by printing their messages (see below).

We wrote: “The policy of legally shooting does has been so difficult to sell to the average hunter that in many instances doe seasons are opened on overpopulated areas, but only a few hunters take advantage of the windfall.”

Excerpt from a 69-page booklet issued by the Texas Parks & Wildlife Department
Reprinted in OL, October 1968

“We often forget that we shoot female quail, female squirrels, female javelina, female ducks, and female doves. We bait our fishhooks with angleworms that have both sexes in the same single worm, and we catch female fish with these hermaphroditic worms…

“Selling only the bulls, the rams, or the billies from herds of domestic livestock is an impractical way to manage domestic livestock. Harvesting only buck deer is an impossible way to manage a deer herd. Unless both sexes of livestock were marketed, our pasture soon would become so overstocked with females that the range could not produce enough forage to feed them. It works the same way with deer.

“Records show that by adequately harvesting the surplus of both sexes, the buck harvest can be increased.”