Every spring across the Northern Plains, wildlife biologists wake an hour before the very early dawn and drive out to... 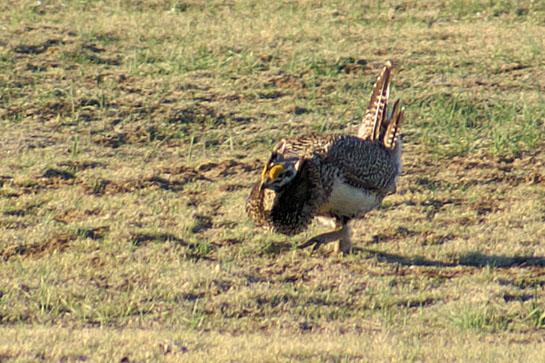 Every spring across the Northern Plains, wildlife biologists wake an hour before the very early dawn and drive out to the grasslands with coffee and binoculars in tow.

They’re looking for dancing grouse, specifically sharptail and sage grouse that gather on leks, or traditional breeding grounds, where the males perform elaborate courtship rituals for females. One way to monitor population swings of these grasslands birds is to count the number of males that show up from spring to spring on these leks.

It’s all in a day of regular fieldwork for most of these biologists, who get pretty good at identifying individuals by their distinctive dancing styles and plumage. Earlier this spring, Wyoming Fish and Game biologist Erika Peckham saw something even more distinctive: an apparent hybrid of sharptail grouse and sage grouse.

“I knew immediately I was looking at something pretty unusual,” said Peckham, who was monitoring leks in northern Crook County in extreme northeastern Wyoming. “It exhibited physical attributes and courtship behaviors of both species, but it didn’t represent either species very well.”

Peckham’s photos reveal the rare cross of the two species, which live in close proximity to each other but seldom interact. The bird’s head resembles that of a sharptail, but the tail displays traits of both species. The hybrid had an inflated chest like that of a sage grouse, but was dark brown, compared to the trademark white of a “booming” sage grouse.

Only one other hybrid grouse has officially been recognized in Wyoming. That was in Sheridan County back in the 1970s. But here in my area of northeastern Montana, at least two sharptail/sage grouse hybrids have turned up.

Biologists with Montana Fish, Wildlife & Parks observed two hybrids on a single lek in southern Valley County a few years ago, and collected one to determine its heredity. The survivor returned to the lek for the next two years, and BLM wildlife biologist John Carlson managed to get several photos of the bird, which he named “Frankengrouse” and detailed in his blog.

“The area where the hybrid showed up is much more sage grouse country than sharptail, but there certainly are sharptails there,” says Carlson. In the Wyoming case, the two species seem to be cohabitating even outside the breeding season.

Near where she observed the hybrid on the lek, Peckham observed a sage grouse roosting with a flock of sharptails in a shelterbelt around a rancher’s home. Sage grouse are generally ground-dwelling birds.

“I certainly can’t say that the bird at the ranch was the same bird on the lek, or had anything to do with it, but it makes you wonder with the sightings being only five miles apart,” says the biologist. “In my years spent working with sage grouse I have never seen them roost in trees. If nothing else, it further illustrates that there is a certain amount of interspecies contact occurring in this area.”

In other words, even birds of different feathers sometimes flock together.