Tips and Tactics: How to Hunt Grouse

When European hunters first landed in the New World they were greeted with a sound with which they were well... 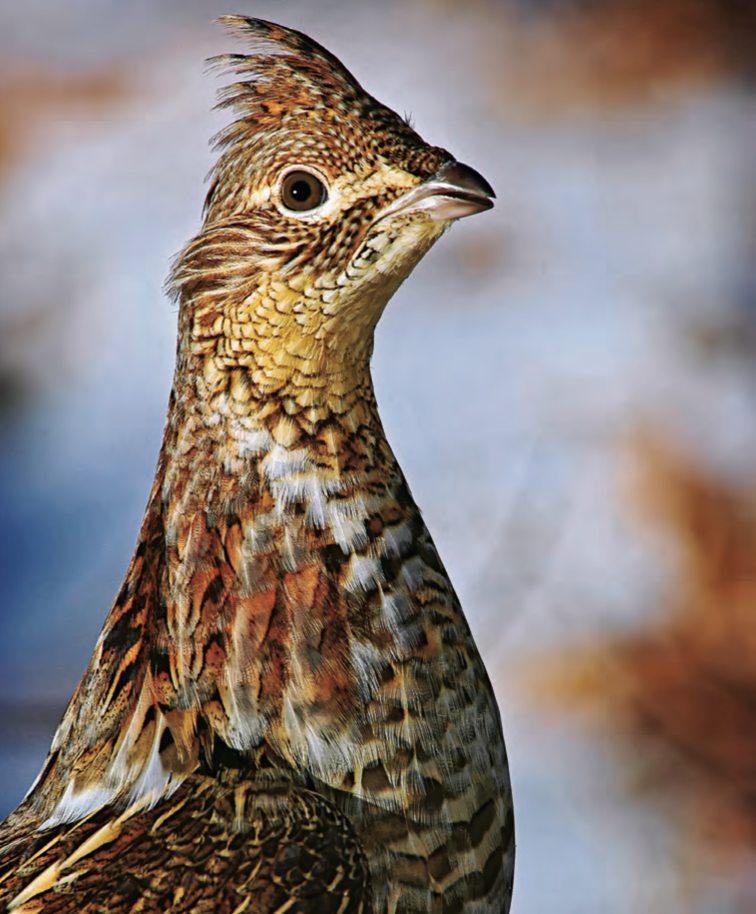 When European hunters first landed in the New World they were greeted with a sound with which they were well familiar. The echoes of ruffed grouse drumming in the old growth forests of the Northeast surely reminded them of the red and black grouse back home. As their covered wagons pushed west, sage grouse, spruce grouse, and prairie chickens sounded a thunderous welcome, and many a settler survived on grouse meat cooked over a campfire—if they were smart enough to pack a smoothbore for the trek.

      Today, the distinctive drumming of the male grouse can still be heard across the northern hemisphere. After some difficult years, ruffie numbers have stabilized thanks to restoration efforts and smart management. Other forest-dwelling family members such as the dusky, sooty, and spruce grouse have also survived threats, though some subspecies that prefer more open country, including prairie chickens and sage grouse, haven’t fared as well, with the heath hen disappearing altogether in the 1930s. European populations of red, black, and wood grouse (the largest of the family, and perhaps better known as Western capercaillie), are also closely managed by conservation-minded sportsmen.

Arguably, the ruffed is North America’s most popular gamebird, and certainly the most romanticized, due much in part to the outdoor art and literature of the early 20th century. Firmly ingrained is the image of tweed-clad men and their long-haired setters wending their way through grouse coverts far from industrialized America. Like most members of the Galliforme order, grouse spend much of their life on the ground, foraging for berries and vegetation within a small home range, moving as their dietary whims dictate depending on
the season. During winter, grouse subsist mainly on catkins, and are particularly fond of the emerging buds of fruit trees, making them a frequent visitor to orchards.

Male ruffed grouse stake out their turf through loud drumming— rapidly flapping their wings, often while perched atop a drumming log used year after year. They are solitary by nature, though more than one hunter has been shocked by a second, unexpected flush.

The first ruffed grouse I ever encountered flushed at my feet and whirred directly away from me down a long, wide lane. Shocked, I didn’t even raise my gun. My companion remarked I’d never have such an easy opportunity again. And he was right. Since then I’ve heard grouse flush as I crawled through thorny vine, caught glimpses of them beating their wings through the “popple,” and generally been embarrassed by them. On occasion, a rushed shot and hopeful prayer have converged in a puff of feathers, and each time the dog brings one to hand, I marvel at the beauty of the plumage, the wild smell in their feathers and, later, the flavor of the forest in their succulent, white meat.

You can judge a grouse hunter by his clothes. A serious hunter’s duds will be in tatters, torn and muddy from slogs through brush and bogs. The more casual grouse hunter, by comparison, looks clean, for he spends his evenings walking logging roads and picking the “fool’s hen” from ditches
as the birds come out to peck gravel. Neither technique is wrong, but it’s the well-worn hunter who takes the most pride in his pastime, and holds the best coverts close to his game vest.

Discovering your own honeyhole means finding edge cover. As long as food (in the form of berries, green forbs, and flower buds) is nearby, grouse spend the majority of their days in the thickest cover they can find, such as overgrown clear cuts, young forests, and dense swamps. An abandoned farm, preferably one with an overgrown orchard, is like money in the bank.

When a grouse does appear, don’t wait for the perfect shot—you’re more likely to hear the bird flying than see it. Anticipate its flight line, swing past it, and pull the trigger, even if your target is not in view at the time. With any luck, you’ll connect, but if not, you’ll realize why experienced grouse hunters count a successful day not by birds in the bag, but in flushes heard. —David Draper 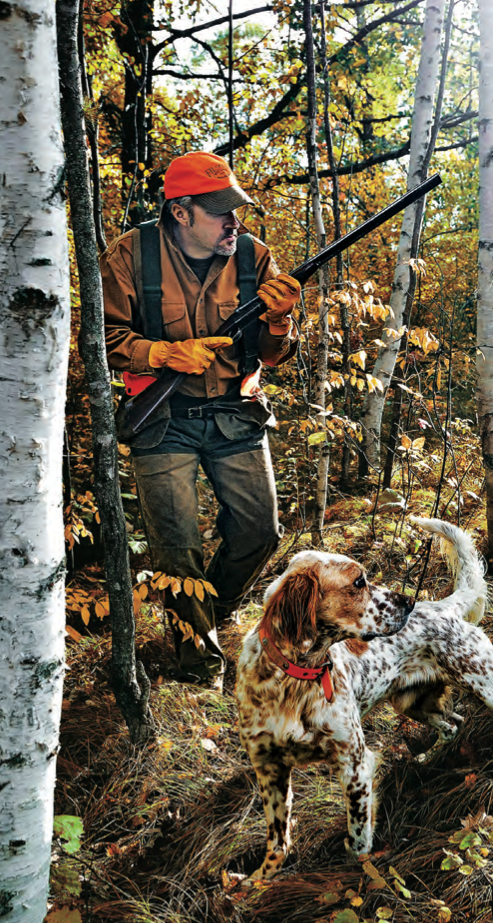 THE PERFECT GROUSE GUN
Naming anything but a double-barrel as the perfect grouse gun is likely to provoke angry e-mails. The uproar would be well justified, and not only for aesthetic reasons.

A classic stacked double with barrels 26 inches (66 cm) long is light enough to carry all day, not so long as to be cumbersome in dense cover, and quick to point at a grouse as it rockets away. Having only two shots shouldn’t be considered a handicap, as the opportunity for a third is so rare as to be remarkable.

Grouse aren’t notable for their durability, making 20 gauge more than adequate and shot size no bigger than 7 1⁄2 preferred. Suitable grouse guns can found on used-gun racks, but they’re often well worn. Of new models on the market, my pick for the perfect grouse gun would be a 5 3⁄4-lb (2.6-kg) Browning Citori Lightning Feather or, if budget shopping, the Franchi Instinct SL at just over 5 lbs (2.3 kg).

THE WORLD SLAM OF GROUSE

I swelled with my achievement: three grouse—sharptail, sage, and ruffed—on the same day. But that’s strictly amateur for some grouse gunners. Here are four regional collections (often called “slams”):

1. Swedish Slam
In the forested Lapland, you can collect the capercaillie, black cock, hazel hen, and willow grouse.

2. Forest Slam
One of the most achievable, you can kill spruce, ruffed, and blue (now called dusky) grouse on U.S. Forest Service land from Montana through Colorado.

3. Arctic Slam
In interior Alaska, you could take the willow, rock, and white-tailed ptarmigan.

4. Prairie Slam
Hunt the grasslands of the Dakotas to bag sage, sharptail, and both greater and lesser prairie chickens. 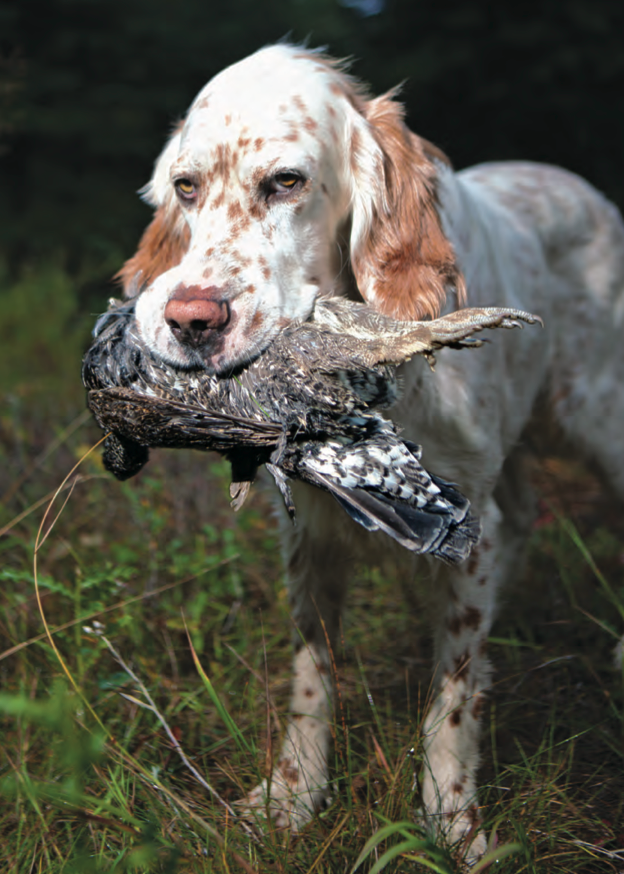 PICK OF THE GROUSE-HUNTING LITTER

1. English Setter
With its head up, tail raised like flag, and a single paw lifted, the setter strikes a beautiful point and it couldn’t be sweeter as a companion. Unfortunately, looks and demeanor have in some ways meant the breed’s downfall, as many have had their nose and instinct bred out of them, turning them into pets rather than hunters. Do your research and buy from a line that’s bred to hunt.

2. Brittany
Formerly considered (and still sometimes referred to as) a member of the spaniel family, the Brittany is a pointing dog known for its excellent nose and ease of training. It’s these traits, along with the Britt’s eager-to-please nature, that makes it a preferred gun dog for many grouse hunters. Of the two types, the small, close-working French Britt gets the edge in tight grouse coverts over the bigger, faster American breeding.

3. German Shorthaired Pointer
Like the legendary UFC fighter that shares its initials, the GSP is a world-class athlete that seems to vibrate with energy and anticipation. Barrel-chested with long legs and a gazelle-like gait, the big-running shorthair might be a liability in thick cover, but it shines in the wide-open space of the West where sharp-tailed grouse and prairie chickens are found, thanks in no small part to the breed’s best-in-class nose.

Hunters who chase (and chase is the correct term) prairie chickens are typically a rangy lot. Long of leg with wind-burnt faces and eyes squinting at far-off flushes, they’re the product of the environment the prairie chicken prefers—huge landscapes of tall- and mixed-grass prairie, far from any signs of civilization. Studies have found the stocky, ground-nesting birds shun anything made by man, including roads, power lines, and wind turbines. These threats to their habitat, along with changing agricultural practices, have caused prairie chicken numbers to decline across their range, especially for the Lesser sub-species on the southern Plains. The Greater Prairie Chicken, known for its elaborate courtship rituals, survives in huntable numbers, mostly in Kansas, Nebraska ,and the Dakotas, where rangy hunters and their big- running dogs walk the grasslands each autumn, watching for a point, hurrying before a flush and, hopefully, making a long shot at these enduring symbols of all that is great about the Great Plains. 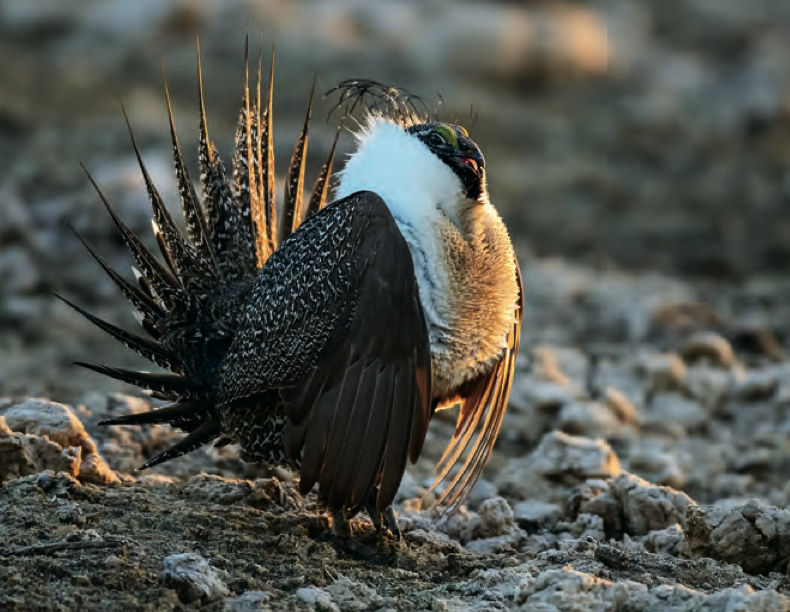 WHITHER THE SAGE GROUSE?

In the last century, sage grouse populations have plummeted from 16 million to as little as a quarter million recorded, depending on the source you believe. What is known: As goes sagebrush, so goes its eponymous fowl.

Every year, acres are lost due to energy development and changing land- use patterns. Sage grouse, known for beautiful courtship displays, now occupy a miniscule percent of their once vast range, making them a candidate for the Endangered Species Act. While there is hope for the bird, as conservation initiatives mitigate habitat loss, there’s little chance the next generation of hunters will know what it’s like to feel the heft of one in their game bag.