Whitetail Hunting Tips: How to Use Deer Calls, Scents, and Decoys

The key to drawing a wary whitetail buck into bow range can often hinge on downright deceit. Calls to make... 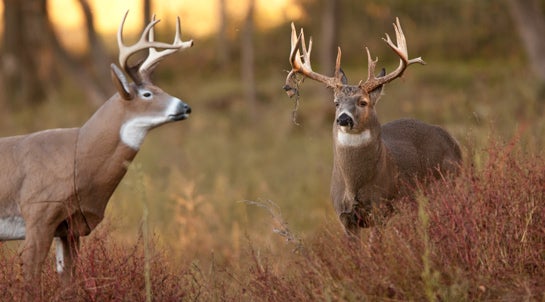 The key to drawing a wary whitetail buck into bow range can often hinge on downright deceit. Calls to make grunts, bleats, and rattles can all play on a buck’s sense of hearing and his natural curiosity. Scents, which play a huge role in how deer interact with each other, as well as their environment, can also be a valuable tool. Decoys can serve to relax or agitate a buck, depending on how you want the animal to react in order to move in your direction. Use them individually, and each one of these can be just enough to entice a trophy into range; use them together in a strategy in which each plays off the other, and you have a recipe that can completely hoodwink a buck into rolling right into your setup.

Here’s how to do it.

EARLY SEASON
Scents: Basic doe urine is all you want to use now. It will reassure deer as they move through an area that all is well in that part of the woods, especially as they travel about on the feeding patterns that are common now. If you go with an estrous scent early, you’ll only spook deer, as they will know that isn’t natural for this time of year.

Calls: A grunt tube is essential. It’s good all season long and is really the only call that should be used in the early season. If your tube is adjustable, make the grunt less deep and guttural so that it sounds more like a young buck. This will be less intimidating to other bucks at a time when they are not yet challenging each other too hard.

Decoys: Try using a subordinate (or smaller) buck decoy now, as young groups of bucks are still moving together and might become curious about the new kid on the block. With deer still locked on feeding patterns, it seems a doe, with doe scent placed around her, might act as a confidence tool, but it’s best to save that trick for later in the season.

PRE-RUT
Scents: Bucks are getting ramped up for the coming rut, and now is the time to challenge a big boy’s dominance. Buck urine, used either in high-traffic travel corridors or in conjunction with a scrape, can bring a bruiser charging in.

Calls: Now is the time to break out a medium to heavy set of rattling antlers or a rattling bag. Bucks are beginning to seriously challenge one another, and even the more passive ones will be curious about who is doing battle. Start slowly and work the antlers into a loud clash for two to three minutes, staying alert to any bucks that may rush in. Take a break of 15 to 30 minutes between each set. When rattling, mix in some grunts or rake a tree or the ground for added realism. As the rut approaches, rattling will only be more effective.

Decoys: Now is the time to go with a standing subordinate buck and place it 20 to 25 yards out from your stand, where deer approaching from different directions might spot it.
Angle the fake buck so that it’s looking perpendicular to you or looking past your stand at an angle (never at you) so that an approaching buck offers a broadside shot or quartering-away shot when it faces off with the decoy.

RUT
Scents: Within two weeks of the peak of the rut is when you want to bust out a top-dollar doe estrous scent. When you start seeing those first bucks—either in person or on a trail camera—running loopy through the forest on the trail of a doe, spread the scent liberally around your best stand on three or four wicks. Mix in a little tarsal gland to fuel a dominant buck’s jealousy at the same time. Use both on drags going in to your stand.

Calls: When you spot a buck cruising in search of does during the peak of the rut, three or four short, quick doe bleats will make it think a willing doe is nearby. If it’s already on a doe’s trail or slipping through and doesn’t hear the bleats, throw a single, loud snort-wheeze its way. That can stop a buck in its tracks and bring it stomping back toward you. Keep rattling and grunting during the peak, too.

Decoys: A good buck decoy, with tarsal scent hung right next to it, can serve to irritate territorial bucks on the prowl and bring them in when you combine it with a snort-wheeze or grunt. Up the ante with a doe decoy used in conjunction with the buck. That combination can be deadly.

For more rut tactics, check out Secrets of the Rut

POST-RUT
Scents: With rut activity winding down, a whitetail’s thoughts return to food, especially in regions where winters can be tough. Generally, it’s time to return to basic doe urine to put deer at ease. About 28 days after the peak of the rut, the second rut should kick in and you should get back to using estrous scent. Because second-rut intensity is lower, don’t expect it to work the wonders it did a month ago.

Calls: The battles and challenges of the rut are winding down, deer have been run hard, and hunting pressure is at its peak. Every sound you make now should be about reassuring a buck that the environment is safe. Occasional doe bleats to mimic those final estrous does can be helpful, but for the most part just stick to light, occasional contact grunts when you actually have your eyes or ears locked on a deer moving nearby and just need to draw it in a little closer.

Decoys: Food has moved back up the hierarchy of needs over breeding, so use a feeding doe decoy out in the open to instill hunt-weary deer with confidence. Don’t use a buck decoy now, as bucks may still be skittish. Place estrous scent around a doe decoy and offer occasional bleats to add to the fake’s appeal.