Photo by Denver Bryan/ Images on the Wildside Here, in the flooded timber and rice fields outside Stuttgart, Ark., it... 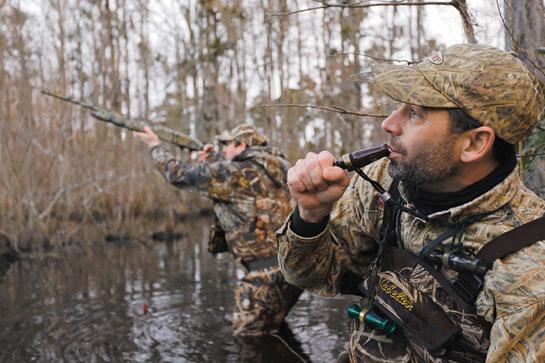 Photo by Denver Bryan/ Images on the Wildside

Here, in the flooded timber and rice fields outside Stuttgart, Ark., it seems that everybody is a champion caller. Or is about to become one. That’s one influence of the town’s nickname: “Duck Capital of the World.” It’s easy to see how Stuttgart got that handle, especially on the Bayou Meto before a November dawn, where a cacophony of highballs and feeding chuckles ripples through the air.

This is where modern production duck-call manufacturing got its start, and it’s where makers and callers converge. So what better place than Stuttgart to have a discussion of the nuances of proper duck calling. I spent a day with John Stephens, president of Rich-N-Tone Calls; Jim Ronquest, RNT’s television producer; and Brad Allen, the reigning world duck-calling champion.

OL: Champion or hunter: Who’s the better caller?
JR: Learn to blow the basics as perfectly as you can and you’ll win contests and kill ducks. Learn to blow what I call a “lick” [a series of quacks in a descending pattern] that’s a good series of quacks and a good feed call, then apply it in the field. Learn two or three good licks, a fast one with two slow or two fast and one slow with a good feed call. Then know when to back off.

OL: How do you know when to call?
BA: If birds are going away from you, or you see them at that critical point where you don’t know if they’re going to turn and come back or hitch off, or birds are moving their heads around, hit ’em with the call. I try to avoid calling when they’re right on top of me and can look down and see me. If they’re cupped up and coming in, all you can really do is change their minds for the worse.

OL: How has your calling changed over time?
BA: I used to blow the same call no matter what. Now, I’m a big proponent of reading the ducks and their reaction to the call. If you have new ducks coming into your area for the first time, you can be more aggressive with the call. Late in the season, when they’re paired up, they’ve gotten more call-shy, so less calling is better.

OL: How do you care for your calls?
JR: When I come in [from hunting], I take them apart and hang them up on a nail in my shop and let them dry. Every couple of days I rinse them out and change the cork. When you feel your call getting flat or changing, put in a new cork. If you don’t have a cork, take your old cork out and chew on it a bit to put some life back in it. When I’m hunting, I carry a dollar bill in my shirt pocket–a dollar bill is great because it doesn’t fray, especially a fairly fresh one. You take that dollar bill and run it between the tone board and reed, and it will wipe out the moisture that’s there.

OL: Does calling change regionally?
JR: I pretty much blow the same stuff wherever I am. There may be some changes in vocabulary on the migration route, and there are changes day to day. Some days ducks are just more callable. Some days no type of call or style of calling will bring a duck in. But from a flyway perspective, good solid licks and quacks work just as well in Saskatchewan as they do in Cameron Parish, La. Old hands on Bayou Meto talk about the “five and seven”–five quacks and seven quacks–blown fast, back-to-back-to-back, for breaking high ducks. Listen to a bunch of happy ducks and you hear the five and seven. If you learn to blow it fast and slow, soft and loud, you can call ducks anywhere.