A look at the features on the newest waterproof cameras from GoPro, Tactacam, Spypoint, and Akaso 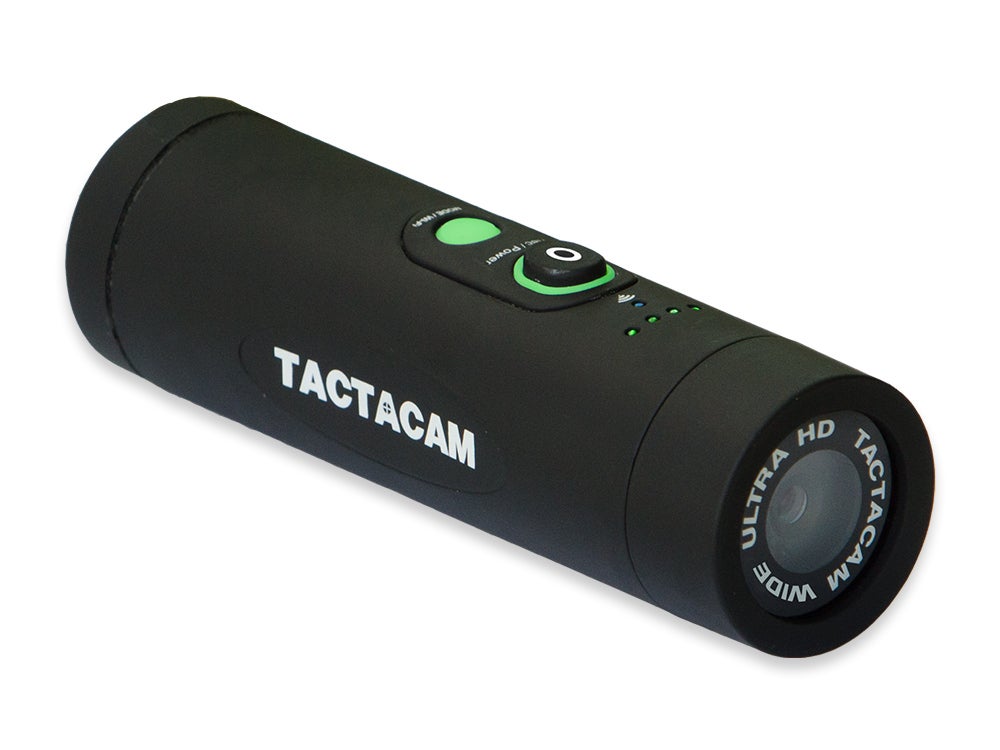 The only thing better than living the adventure of a lifetime, is the ability to capture the event on video so you can relive it over and over again for years after. Just ask Uncle Rico—if coach had put him in during the fourth quarter of 1982’s big game, the team would’ve been state champions (sorry, 2019 marks the 15-year anniversary of Napoleon Dynamite, so I couldn’t resist). But with so many makes and models of action cameras on the market these days, it’s sometimes tough to know which one suits your hunting or fishing free-for-all. To help you dial in on the camera and features you’ll need in the field, here is a quick look at four different recorders tailored specifically for the outdoors.

When it comes to self-recording, simple is better, and operating a camera doesn’t get much simpler than it does with the Tactacam. Attach this unit to a bow or gun, and start and stop recording with the push of a button. Or, if you’re technologically savvy, the 5.0 model comes with a remote control, or you can take command with the Tactacam smartphone app. It records in 4K resolution, has a low-light sensor, and captures 360-degree audio. This camera truly shines tucked under the barrel of a shotgun or extending from the riser of your favorite bow. However, a word of caution—try to avoid camera convulsions. It’s easy to get excited in the moment, forget you’re filming, and point the business end of the camera in all sorts of directions. The result is a video that’s barely viewable. Done poorly, you’ll see the moments leading up to a shot, a tremor from the shot, and possibly a second or two of well-framed footage after the shot, before the film looks like earthquake footage. This style of camera is great for keeping your hands free and recording a first-person perspective, but if you aren’t mindful about recording moments outside that window, expect to be nominated for a Golden Razzie.

Let’s face it; GoPro set the standard in action cameras. Before GoPro, filming first-person narratives of fishing and hunting adventures was a convoluted mess of batteries, digital tape, handheld cameras, and poor image quality. Wnd with each iteration, GoPro’s cameras continue to get better and better. They’re not the cheapest action camera on the market, but you know you’re getting what you pay for. The Hero7 is the latest-and-greatest from the company and it has the ability to do things no other camera has been able to do before—like accept voice commands and live stream footage so you can share your story as it happens on Facebook Live. The video quality isn’t anything to sneeze at either. It can shoot up to 4K60 video, and snap 12MP photos. Other filters include TimeWarp, which increases the film speed up to 30X, and 8X slow motion, to relive unique moments in all their glory. Its waterproof housing makes it safe to depths up to 33 feet, but go beyond that and you may be out a camera and several hundred frogskins.

If you’re not keen on dropping several hundred dollars on a camera with features you’d rarely use, but still want something that records in 1080, then the Xcel HD2 might be what you’re looking for. If your flat screen doesn’t broadcast in 4K, you likely have little need for such a high resolution setting in an action camera. What’s more, if a camera still captured photos up to 12MP, and included a remote control that works up to 120 feet away, why spend the extra money on other frills and functions you don’t need? This little unit from Spypoint is shaped similar to a GoPro’s Hero7 “blocky” profile, and it uses the same mounts and attachments. There is a 2-inch viewing screen on the back, a zoom function that allows you to take it from a 170-degree view up to a 140-degree view, a time lapse mode, and the waterproof housing keeps it safe and dry if you plan to explore underwater worlds.

One of the things I love about Amazon is that when you begin searching for a specific item, you can get lost in a wormhole of similar but equally good (sometimes better) products. That’s how I found the 4K camera from Akaso. At first glance, it looks and feels much like a GoPro, and when it comes down to features, it’s tough to beat—4K video resolution, 20MP photos, a 170-degree viewing angle with a 5X zoom that can take it to 70 degrees, image stabilization, and a 2-inch viewing screen. In it’s waterproof housing, it’s protected to depths of 100 meteres, and if you have the Akaso app, you can relay everything to a smartphone. There’s even a remote wristband so you can start and stop recording without putting a finger on the camera. But what makes this unit truly stand out is the price—you can get a complete setup for less than a Benjamin.