How To Hunt Everything: Caribou

_, which is available here. Keep an eye out for more species and how to hunt them here on the... 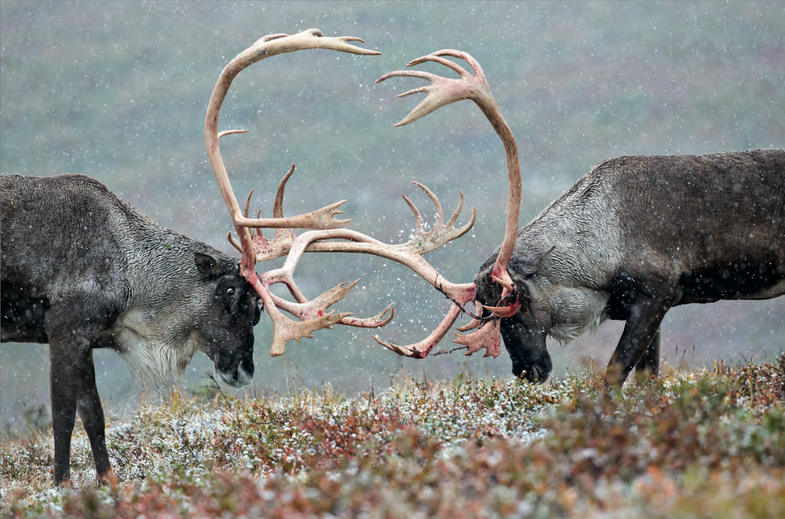 _, which is available here. Keep an eye out for more species and how to hunt them here on the Hunting blog._

No animal better embodies the wide, wild north than the caribou. Its downy- white neck looks like early snow in the high country, and its flank—ranging from slate-gray to supple brown—resembles frost-touched tundra in September. But it’s the caribou’s towering, impossibly branched and pointed and palmated antlers that captivate hunters. How such a rack can sprout from an animal the size of a mule deer has prompted many a first-time caribou hunter to simply gawk at a line of passing bulls, looking for all the world like a grove of willows on the move.

One constant is that caribou are always on the move. It’s their defining characteristic, marching from calving grounds to wintering range, seldom stopping for more than a few hours to bed and feed. Most hunters encounter any of the half-dozen subspecies of caribou in the midst of their fall migration, and their incessant, plodding pace is deceptive.

No human could hope to keep up with a herd of ’bou in their regimental formation, nose up, oblivious to danger, guided by some beacon that remains invisible to those of us who long for a landmark to spot where it is on the trackless tundra that the caribou live—or rather, where they are making their home today.

The empty land and this restless behavior define caribou everywhere they live. Caribou are really North America’s reindeer. Northern Canada is home to six distinct subspecies of the family, though taxonomists quibble over some of the branches off the trunk. The family is circumpolar, and includes the tundra reindeer of Scandinavia and the woodland reindeer that extend across the expanse of northern Russia.

The most remarkable racks belong to the mountain caribou of northern British Columbia and the Yukon. But numbers have always defined the woodland subspecies of northern Quebec and Labrador, where a hunter might count thousands of animals in a long day of monitoring a migration trail. Barren-ground subspecies extend west across northern Manitoba, Saskatchewan, Alberta, and into Alaska, where the famous North Slope Porcupine Herd has stymied energy development on the North Slope.

No matter where they live, whether in the cloudberry bogs of northern Quebec or the stunted-timber taiga that extends in an immense lonely arc from Hudson Bay to the Arctic Ocean, caribou are hunted according to the same basic tactic: getting in their way.

If you can find a string of migrating caribou, chances are good that you’ll find a mature bull as long as you’re patient. Rifle hunters should prepare for shots out to 300 yards, but standard deer calibers will handle caribou just fine. Bowhunters set up along ancient migration trails, typically in those spots where caribou pause to shake after swimming across lakes and rivers.

A SERIOUS DECLINE
For generations of American hunters, caribou were the polestars that guided first international trips. Quebec and Manitoba herds were close enough that hunters could clock out of work on Friday, bag a couple bulls, and be back home by Sunday, with meat in coolers and those remarkable racks strapped to the roof.

But over the last decade, caribou numbers have declined range-wide. Biologists can’t agree on the cause—climate change, gas and oil development, and habitat degradation are all possible culprits— but the outcome is significant. No longer are migrations robust and predictable, with two-bull bags the standard. Most outfitters, if they still offer trips at all, limit hunters to a single bull.

The declines are especially sharp in the eastern Canadian habitats,, especially in Quebec and Labrador, where the famous Leaf River and George River herds once sustained annual harvest well into six figures.
Will herds recover? Possibly. But for now, hunters are better off heading west, to British Columbia and Alaska. 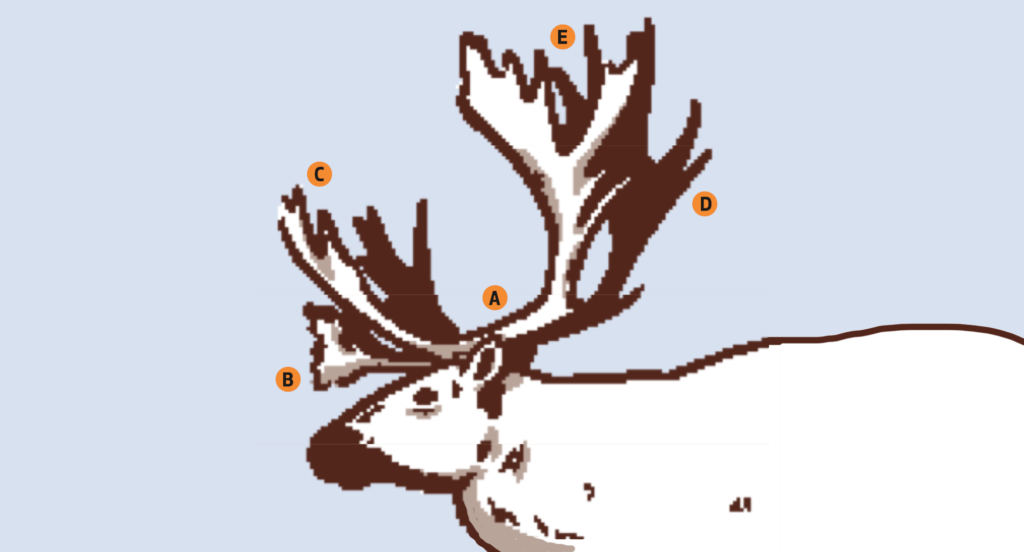 [A] Main Beams
The long antler that erupts from the skull and extends outward and back, then sweeps forward, usually showing palmation at its upper reaches.

[B] Shovels
Also called “brow palms,” the usually palmated antler that extends from one main beam perpendicular to the bull’s face, sometimes as far as the nose. Occasionally these palms grow out of both main beams, creating what is called a “double shovel.”

[C] Bez Structure
The forward-extending lower portion of the main beam, the bez typically branches into two or more fingers, and may be palmated.

[D] Rear Point
The unbranched rearward-pointing spike that grows out of the middle of the main beam.

[E] Tops
The series of distinct points that erupt from the top of the main beam. 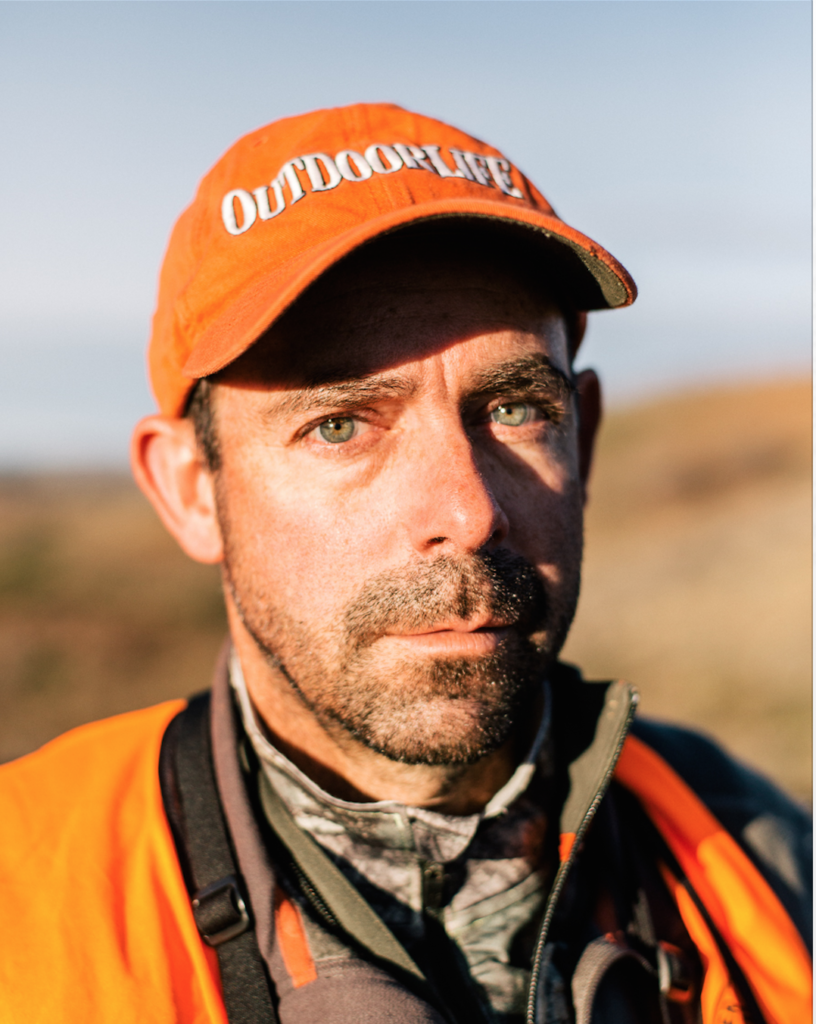 The largest village on Quebec’s Ungava Peninsula, Kuujjuak is accessible only by air, and the tundra edges so close to town that the jet that flies in once a week from Montreal circles before landing—to be sure the runway is clear of caribou and polar bears.

On my first flight into Kuujjuak, I was gratified to see people waving energetically as we buzzed the terminal and runway. I waved back, out my little airplane window.

“What a friendly town,” I said to myself as we squared up to the grass runway and bounced down. As I exited the plane, the waving continued.
Minutes later, the first black fly bit my cheek. Then a dozen attacked. I flailed my hands in a futile effort to beat back the flesh-drilling vermin. It was then that I understood. Those people weren’t waving. They were swatting these insidious flies.

My trip improved greatly after this. Later that day I stepped off a floatplane to begin a self-guided hunt. I took two remarkable caribou, the first by spotting a string of migrating bulls and sprinting to get within a long rifle shot. Later, I belly-crawled across the soggy tundra to a bedded bull and shot him when he stood up to stretch.

Caribou have a deserved reputation as the bubbleheads of the North. One moment, they can be sensibly avoiding danger and acting wild and wily; the next they may run directlyoward the threat. Many hunters have cited this capricious behavior, describing caribou as either goofy or stupid. But that doesn’t credit either the animal or its habitat. It’s entirely possible that the double-shovel bull that runs right up to the muzzle of your gun has never seen a human before, and doesn’t recognize your erect profile as being particularly dangerous. That’s the best reason to hunt the wild North—human presence here is so temporary.

On the other hand, caribou are inspired to truly odd and erratic behavior when the black flies become especially bothersome. I’ve seen a docile herd suddenly blow up like a covey of quail and run great distances when the wind quit and the flies started biting.