A lifelong hunter, Tim Wagner of Arlington, Texas, saw his dreams come true in June 2009 when he headed to... 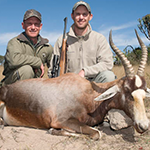 A lifelong hunter, Tim Wagner of Arlington, Texas, saw his dreams come true in June 2009 when he headed to Africa on a hunt for plains game.

In his own words, Tim’s favorite hunting experience prior to winning the Africa Adventure trip:

I hunt each year on my uncle’s ranch in the Texas Hill Country. My dad joins me sometimes, and 2007 was one year he was able to make the trip. My uncle had seen a great buck, the biggest he had ever seen on his ranch, along with another large buck within 50 yards of my stand in early September. He had my cousin call me right away to let me know. I could tell immediately that she wasn’t pulling my leg, and trust me, there is plenty of teasing that goes around.

So that explains why I slept restlessly for two months.

My dad had a shop building on the farm where I grew up. He had made a wood-burning stove out of two 50-gallon barrels. In the winter, I would sit on an old couch in front of that stove and read through a stack of old Outdoor Life and Field & Stream magazines he had saved. In the summer, I’d read a magazine, then pick up my pellet gun to stalk the sparrows in our juniper windbreak as if they were kudu or moose.

All of that to say – I’ve never been on an African safari, but if reading countless Outdoor Life tales of safaris, everything Hemingway wrote, everything Ruark wrote, and Roosevelt and so many others – well, after all of that I feel like I’ve been, without ever going. I think that’s worse than if I didn’t know what was waiting there.

Primarily, I’m a whitetail hunter in the Texas Hill Country. I took my best buck last year, a 10-pointer that now watches over our dining table – at my wife’s insistence. The Hill Country is so reminiscent of the African brush country that it has nearly as many African animals as the continent itself. African animals thrive in that environment without the predators they face on their native continent. So, I feel that the spotting and stalking abilities I’ve honed on the wary whitetails would serve me well in Africa.

I think a pronghorn hunt, and maybe even a mule deer foray, are within my reach in the near future. But, with my top priority being a young (and hopefully soon growing) family, an African safari is out of my reach for the foreseeable future without an opportunity like this through Outdoor Life. OL has been a part of my life since I could read – heck, since I could look at pictures. And, it will be as long as I live, win this prize or not. I’ll just have to live vicariously through the winner, as I have for almost 30 years with Outdoor Life, if I don’t.

Tim’s reaction to finding out he was the winner of the Africa Grand Slam Adventure:

“Holy Cow! I’m very glad I’m sitting right now! This is so awesome! This is in the top three: the wedding, the children and then this.”