Mission October: Northwoods Cast and Blast for Grouse and Muskie

Looking for a different kind of fall hunting getaway? Maybe something that squeezes nicely between the bugling bulls of September... 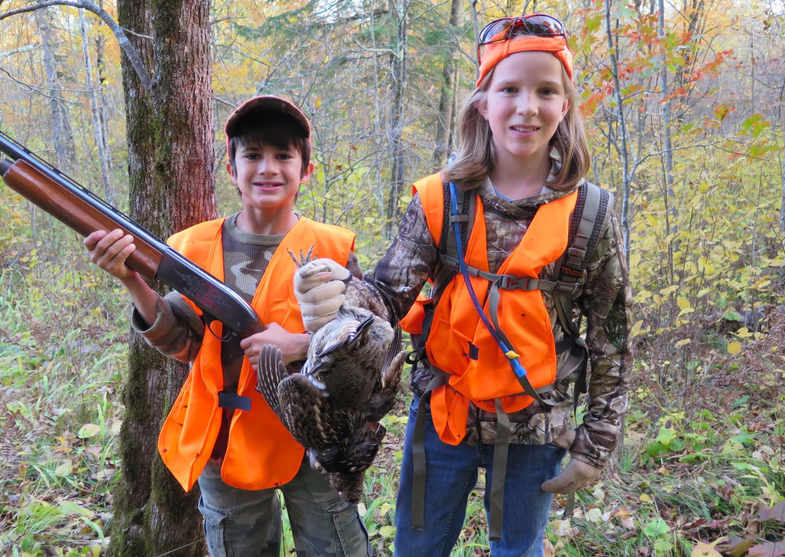 Looking for a different kind of fall hunting getaway? Maybe something that squeezes nicely between the bugling bulls of September and, say, the whitetail rut in early November? If you love to spend as much time in the pine-scented northwoods as I do, this is the month to take full advantage of some of the finest days of the year. Your mission now, if you choose to accept it, is a unique combo hunt: For upper Midwest ruffed grouse and river muskies—a toothy, powerful, apex-predator fish that you must “hunt” in most every sense of the word.

Several states offer this unique sporting combo, but the three best are Minnesota, Michigan, and Wisconsin, where I’m happy to report the ruffed grouse in the state’s far northwestern corner were found in above-average abundance during a whirlwind two-day hunt just a few days ago. Peak fall coloration and some bonus woodcock also kept things interesting, as I covered several miles of prime cover accompanied by my trusty Remington 1100 12-gauge and my two grouse-crazy 10-year-olds.

Although not quite ready to be toting guns of their own, the pair are eager to do their part—and in the process more than make up for my lack of a good bird dog. The two will happily help retrieve downed birds in the nastiest of tangles, and, as long as plenty of snacks and water are involved, aren’t afraid to log many miles exploring remote country with their dad. In fact, if anything, they prod me to hunt harder and longer. If the first two years of tagging along on my hunts have shown me anything, it’s that the pair will be truly deadly uplanders in no time.

Prime Time is Now
The next two to three weeks, as leaves begin falling in earnest, will see some of the finest grouse hunting of the season in my favorite haunts, which also tie in nicely with our combo adventure. And that’s because northwoods muskies are found in the very same areas. Huh? My “go-to” grouse locations have always centered on northwoods river valleys, with some favorites being remote stretches of the St. Croix and Namekagon rivers, as well as the Chippewa, Totagatic, and Flambeau. Some recent logging along the St. Croix, especially, has produced plenty of young aspen regrowth areas that are grouse magnets. Working the wooded edges of these expansive aspen stands that parallel the river produced lots of flushes last week.

For this reporter, chasing mid-October grouse has always held several benefits, not the least of which is a great way to find hot deer sign that I will soon be lurking over from a portable treestand, bow in hand, come the end of the month. I know I’ve hit the jackpot when I find a series of extra-large rubs, or an area littered with scrapes near some jungle-thick cover, on some remote county or federal land I know few others will ever see. And when I can return to the family cabin come late evening and plan my attack on these areas while dining on a meal of fresh-grilled grouse breast, well, all the better. But back to our combo adventure… 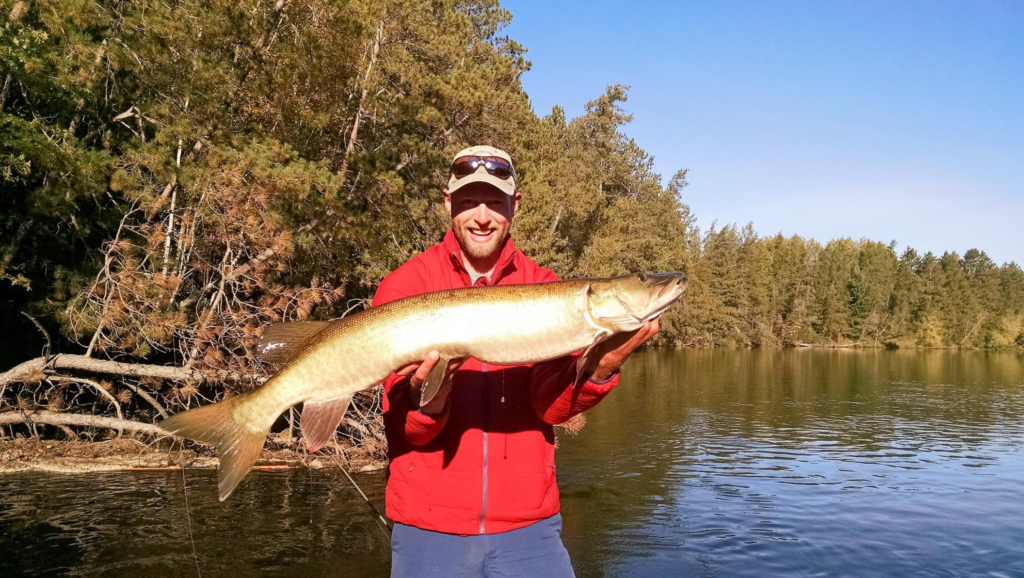 On the Hunt for Finned Predators
All five aforementioned northwest Wisconsin rivers also happen to hold good populations of muskies, but then so do many other remote rivers in the state’s northern tier. If lakes are more your thing, there are dozens of great options from which to choose. In Minnesota, huge and scenic Lake Vermilion, in far-north Saint Louis County, is a muskie factory that sits on the edge of the Boundary Waters Canoe Area Wilderness, a huge stretch of some of the finest (and most lightly hunted) grouse habitat you can find.

If you’ve never chased muskies on your own, I’d recommend a winding, remote wilderness river, which in the fall will not only be lined by a palette of northwoods colors, but the largely deserted waterway will seem like your very own private honeyhole. Hook up with a respected guide service such as Hayward, Wisconsin-based Hayward Fly Fishing Company—owned by Larry Mann and Wendy Williamson—and your experience just might have you establishing a new annual tradition.

“I never saw another soul on our trip yesterday [Oct. 13],” said Williamson, who acknowledged that fishing has currently been quite good, for muskies that can range from about 36 up to 50 inches and beyond. Beefy 40-plus-inch fish can be common in October. “We will guide right into November, but last year we were shut down on November 10th—when many rivers froze right to the bottom—and that’s typically when we get to fish, so we were bummed.”

When you talk about game changers, Williamson and Mann certainly qualify. After moving back to Wisconsin from Colorado in 1998, and opening their fly shop in 2005, the couple ignored local lakes and instead began guiding on area rivers for smallmouth bass and muskies, using McKenzie-style drift boats—until then, a largely western craft that was almost unheard of in Wisconsin. Since that time, the technique has spread, and interest in flyfishing for smallmouth bass and muskies is at an all-time high.

Three Days of Adventure
While it’s certainly possible to combine a grouse hunt with a muskie trip in the same day, to my mind it’s best to devote separate days to each. If I had three days to spare, I would sandwich an intensive, day-long hunt for northwoods muskies between two days of grousing on the area’s expansive public lands—county and federal forest lands. And if you hooked up with Williamson’s guide service, you could pack light—pretty much just your grouse gun and boots. A day of flyfishing with Hayward Flyfishing Company includes all the rods, gear, and flies you will use, along with lunch, instruction, and more. Contact the Hayward Fly Fishing Company at (888) 325-2929 or (715) 634-8149, or go to www.haywardflyfishingcompany.com.

Then send us the pictures of your success. With those blazing hardwood leaves as the backdrop.