Timothy Scott was attacked by a bear while on a hiking trip Sunday, marking the first recorded black bear attack... 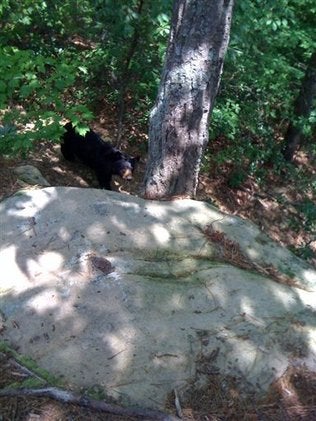 Timothy Scott was attacked by a bear while on a hiking trip Sunday, marking the first recorded black bear attack ever in Kentucky history, according to the Associated Press.

Scott, 56, was hiking ahead of his wife and son in the Daniel Boone National Forest when he spotted a 150-pound black bear. The bear was about 25 feet away, and Scott took a few photos with his cell phone before it disappeared beneath a rock ledge.

Scott started to call his wife to have her take a different trail when the bear reappeared and charged. Scott yelled and tried to scare off the animal, but the bear continued its approach. Scott hit the bear with a stick and tried to scramble away, but the bear “lunged forward and grabbed me a bit but let me go” he told the Associated Press.

Scott tried to dodge around trees but the bear was too quick. It grabbed Scott’s leg, threw him into the woods and then chomped down into his thigh. Scott then went for his pocketknife hoping to gauge the bear in the eye.

“The bear had a really good chunk of my leg in his mouth and was shaking me,” Scott told the Associated Press. “He was trying to subdue me, and he was focused on nothing but doing that.”

Luckily a few other hikers spotted the attack and joined in on the brawl. One hiker threw his daypack at the bear knocking it off of Scott.

The other hikers and Scott retreated back down the trail, with the bear stalking close behind. Scott was picked up by an ambulance at the trailhead and received more than 50 stitches. He’s expected to make a full recovery.

Local authorities have closed the hiking area and are working to kill the problem bear.

Black bears have slowly made their way back into Kentucky from Tennessee and Virginia. Wildlife officials don’t have solid estimates of black bear numbers in Kentucky, but populations in neighboring states are growing.

Tennessee hunters set a state record in 2009 by harvesting 571 bears. Last year Kentucky held its first black bear season in more than 100 years, but no bears were killed during the two-day hunt.