Nick Anderson, a football coach from North Carolina, could be the new owner of the blue catfish world record. Anderson... 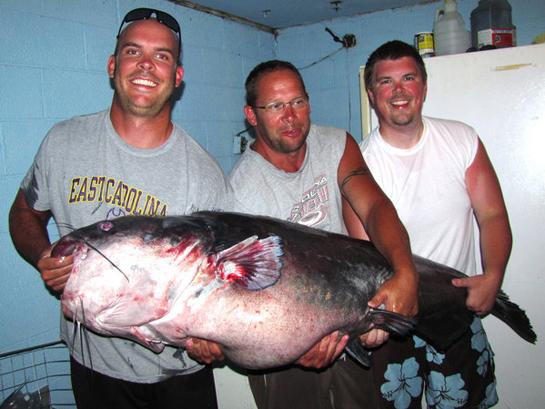 Nick Anderson, a football coach from North Carolina, could be the new owner of the blue catfish world record.

Anderson landed a massive 143-pound blue with the help of his dad and brother while fishing on Buggs Island Lake along the Virginia-North Carolina border Saturday night. The fish measured 57 inches long with a girth of 43.5 inches. Anderson is now waiting for an official review to take the Virginia state and world record: 109 and 130 pounds, respectively. The current world record blue catfish was pulled from the Missouri River on July 20, 2010.

The three men were on their annual Father’s Day fishing trip, a family competition for bragging rights and a plastic trophy, when the fish hit around 8 p.m. It took Anderson about 45 minutes to haul the brute in.

“My dad netted him by the head, my brother grabbed the tail and I grabbed his body,” Anderson told the Newsobserver. “We were just shocked.”

Anderson’s potential record isn’t the only monster cat the trio has recently hauled in. They were still pumped from a giant 95-pound fish Anderson’s father caught three weeks ago. Anderson thought it was the last time he would see a fish that big.

“My dad caught that 95-pounder three weeks ago, and that was the biggest cat I’ve ever seen,” Anderson told the Virginian-Pilot. “And I’ve been catfishing with my dad since I was a little kid. You gotta figure that’s something you’ll never see again.”

Anderson did not reveal his choice of bait except for saying it was a secret family recipe that’s been in use for many years. He told the Virginian-Pilot that he used an Ugly Stick and a Shimano reel spooled with 30-pound test.