Does the perfect muley cartridge really exist? We put 3 popular cartridges to a head-to-head-to-head test 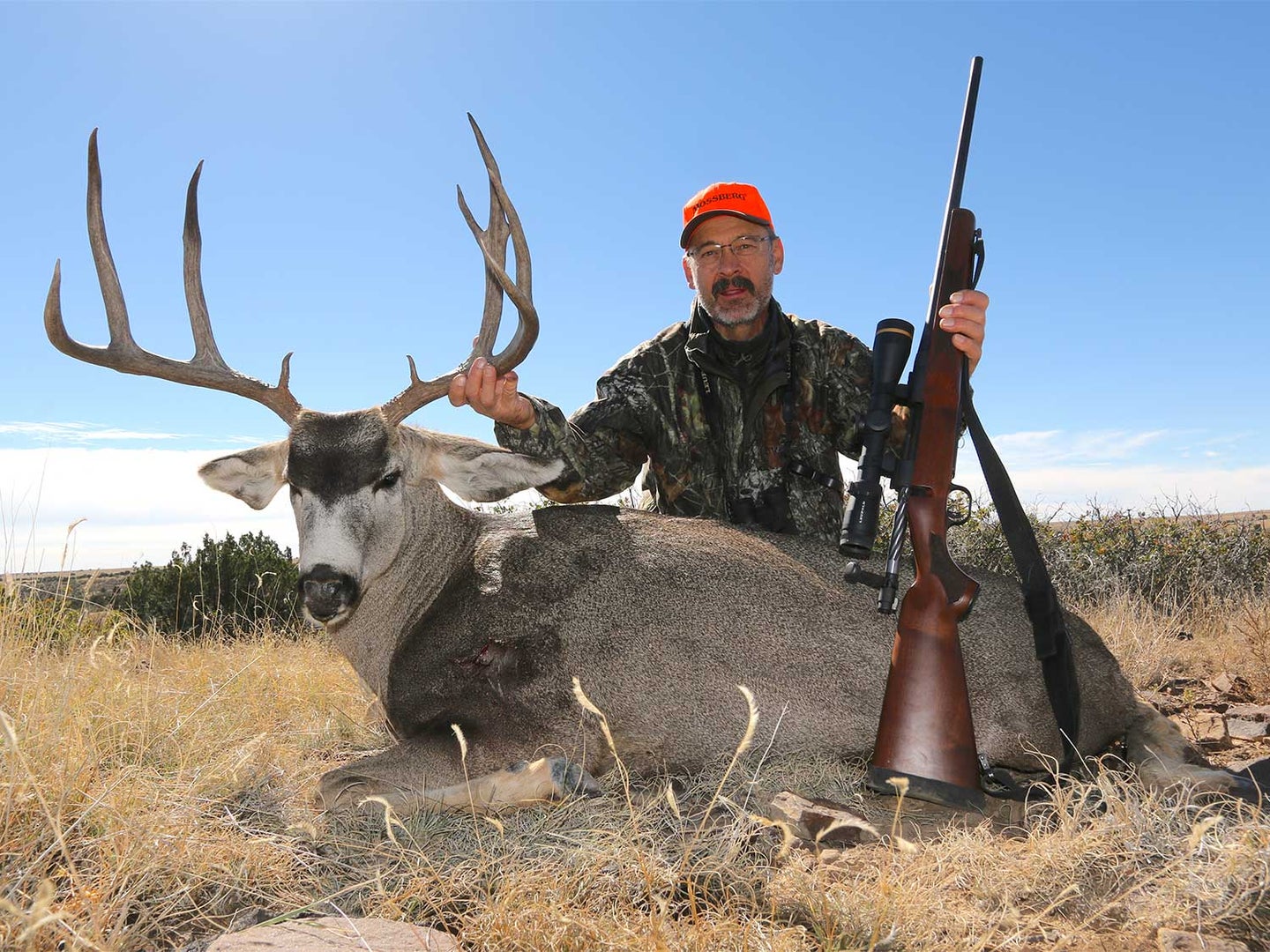 Let’s admit this: you can kill the biggest mule deer buck with any rifle cartridge, even a .22 Short. But mule deer hunters don’t want to hunt with a .22 rimfire. They’re looking for the most effective mule deer cartridge on the market. It’s obviously not the .22 Short, but what is it?

Stir the fire at a western deer camp and you’re liable to spark votes for everything from the .300 Weatherby Magnum to the .22-250 Remington. But if I had to lay money next to the coals, I’d risk it all on three cartridges: .270 Winchester, 7mm Remington Magnum, and .300 Winchester Magnum.

Why these three instead of, say, .280 Remington, .28 Nosler, and .300 Remington Ultra Magnum? Popularity and longevity. Certainly many newer cartridges can scribe a better ballistic profile than each of these three, but this triumvirate has been consistently putting meat on poles and antlers on barn doors for a combined 205 years. Let’s investigate each and see if we can figure out why.

This zippy little round didn’t set the world on fire when it hit the fields in 1925, but within a few years it was scorching game fields around the world. It’s nothing more elaborate than the .30-06 Springfield case necked down to hold a .277-inch diameter bullet. Ah, but what a difference a little necking makes.

By 1925, smokeless powder had been lighting up sporting arms for 31 years. The .30-06 and 7x57mm Mauser were probably the two most popular cartridges for hunting everything but dangerous game. Both had plenty of punch and zip, but neither could quite match this new, oddly sized .270-caliber that propelled the Goldilocks bullet. Not too heavy, not too light. Not too fast, not too small. This was a 130-grain spire point ripping downrange at 3,100 fps. It left the muzzle of a 24-inch barrel carrying roughly 2,775 ft-lbs of energy. It held onto about 1,000 ft-lbs clear out at 600 yards, probably a lot farther than any nimrod thought of shooting in those days. Recoil in an 8-pound rifle, typical for that age, was about 18.2 ft-lbs at a recoil velocity of 12 fps. Pretty mild. Easy to shoot without flinching.

Depending on the density and shape of the bullet used, a mule deer hunter could zero this new .270 Win. to strike 3 inches high at 100 yards and it would be dead-on at 287 yards. Bullets would stay within an 8-inch diameter circle clear out to 337 yards, about 100 yards farther than most hunters felt comfortable shooting with open sights. Even today, with the fine scopes we have, 337 yards is still a pretty juicy maximum point-blank range. But after the post-WWII 1950s rolled on and jet planes began breaking the sound barrier, hunters began yammering for more speed and reach in their rifle cartridges, too. And here came Remington…

Roy Weatherby had ushered in the age of hyper-velocity hunting cartridges during WWII, but most Americans were too busy to notice. Throughout the 1950s, the average family man wasn’t likely to have the funds for the high-dollar Weatherby rifles movie stars like John Wayne and Roy Rodgers were touting, but pressure was mounting for something new, shiny and fast. The 7mm Remington Magnum delivered it. Here was a fully modern cartridge throwing 140-grain bullets 3,175 fps. And it came wrapped in a belt. That darned cartridge was so powerful it needed an extra belt of brass to hold it all together. Or so went the popular misconception. Actually, the belt on this, the Weatherbys, and all belted magnums (nearly all of which evolved from the .375 H&H Magnum case) was originally installed for headspacing the cartridge. It has nothing to do with strengthening it. But never look a marketing gift horse in the belt. If folks wanted to believe the 7mm Remington Magnum’s belt made it special, Remington wasn’t going out of its way to dissuade them.

But sheer speed wasn’t this cartridge’s only selling point. If it were, the slightly faster 7mm Wby. would have been flying off the shelves. No, what made the “7 Rem.” so desirable was its availability in the new M700 Remington. This now famous, standard-length-action bolt rifle was released that same year. It cost no more than the average .30-06. The combination of this new rifle and flat-shooting round that could throw anything from a 140-grain deer bullet to a 175-grain elk bullet pushed the 7mm Rem. Mag. M700 to the top of many Christmas wish lists.

It’s enlightening to note that in 1962 there really were no US 7mm hunting cartridges other than the proprietary Weatherby. The European 7x57mm Mauser was fairly well known, but more as the Spanish military round that bedeviled our troops in Cuba during the Spanish-American war of 1898. Remington was plowing new ground while responding to the early success Winchester had been having with a similar belted magnum, the .264 Win. Mag. released in 1958. Because the 7mm Rem. Mag. could launch much heavier, 175-grain bullets, it quickly dominated the .264 Win. Mag. You can bet Winchester wasn’t going to ignore this challenge. The year after the 7 Rem. hit the streets, Big Red responded with what was destined to become one of the most well known and respected belted magnums in the world.

Just as Remington stole the thunder of the .264 Win. Mag. by increasing bullet diameter by a mere 0.020 inches, Winchester widened the .284-inch bullet atop the 7mm Rem. Mag. by just 0.024 inches to create its .300 Win. Mag. Wisely, Winchester stuck with the .30-06 overall-length so its new belted magnum—unlike Weatherby’s full-magnum-length 300—could be chambered in inexpensive standard length actions like its own M70. But it one-upped the 7mm Rem. Mag. by maximizing case volume. Designers pushed the shoulder junction and total case length a smidgeon farther forward. Top this powder reservoir with the all-American .308-inch bullet and you’ve got a sure winner.

Those are the foundations of three highly regarded and widely used mule deer cartridges. But how do they stack up when shooting some of today’s best bullets at maximum velocities? To make this a fair test, we should select hunting bullets (not match) with similar B.C. ratings in their respective calibers. Low B.C. projectiles suffer more air drag than high B.C. bullets, so they always skew trajectories lower. At extreme ranges it’s possible to increase downrange energy and minimize wind deflection by shooting higher B.C. bullets. But that involves a trade off: more recoil and lower MV. Lighter bullets with lower B.C.s generally shoot flatter out to 600 yards or so. They kick less, too. And deflect more in crosswinds. Hunters should consider such things when making their cartridge/rifle choices.

The following trajectory tables were generated based on G1 B.C. numbers and by zeroing each bullet for its Maximum Point Blank Range on an 8-inch diameter vital zone. Winds were right angle, 10 mph. All other environmental conditions identical.

A careful reading of these trajectory tables should inform the astute observer that there is but a measly 1-inch difference in drop and 3/4-inch difference in wind deflection between the worst and best of these three. In other words, not enough to matter on a deer-sized target! As for energy on target at 300 yards, they’re all packing heat (1,988 –ft-lbs to 2,700 ft-lbs, not that any mule deer buck will notice the difference.)

At 500 yards the 7mm’s ballistic advantage begins to matter with nearly 10 inches less drop than the .270, 6 inches less than the .300. Windage differences remain minimal thanks to the fairly equal B.C. ratings. And energy? We’re still a long way from any concern about that.

So Who’s the Big Winner?

The numbers favor the 7mm Rem. Mag. here, but we could cherry-pick bullets to make any of these win a trajectory race. And, with today’s laser rangefinders, scope dialing turrets, and ballistic reticles, we have the technology to compensate for any of this. These all shoot flatter and drift less than the highly vaunted 6.5 Creedmoor flinging a high B.C. 142-grain bullet. But the wrong bullet choice could change all that.

This is why hunters should judge cartridges by much more than just terminal ballistics. Because all of these chamber in standard-length actions, rifle lengths, and weights should be a wash. One could argue that extending the barrel length of the two magnums could boost their top ends another 50 fps or so. But is clumsier balance and handling worth it?

Then there’s cost. In general, 20 rounds of .270 sell for 20 to 30 percent less than either of the magnums. That could lead to increased practice which could lead to more sure, one-shot kills regardless of a few inches more drop and drift.

One could also argue for the increased magazine capacity of the .270 Win. Most rifles will handle one more of those than either of the magnums. Most practiced, careful shots won’t care about this. If bigger game is on the menu, the 7mm or .300 might get your nod. A 175-grain or 180-grain in the 7mm Rem. Mag. makes for an impressive elk, moose, and bear rifle. And it ain’t bad on kudu, oryx, wildebeest, and even eland. Ditto the .300 Win. Mag. with 200-, 210- and 220-grain slugs.

But mule deer? A good marksman and careful hunter should find the old .270 Winchester more effective now than it ever was in the 20th century. New bullets. New powders. New rifles. New performance. Yup, .270 Winchester. My idea of the perfect mule deer rifle. At least it is this week.