Authorities in South America are on the hunt for poachers who killed nearly 2,000 hammerhead, Galapagos and silky sharks, reports... 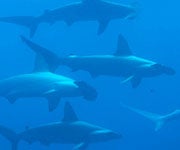 Authorities in South America are on the hunt for poachers who killed nearly 2,000 hammerhead, Galapagos and silky sharks, reports The Guardian.

Divers were researching sharks in Columbia’s Malpelo Wildlife Sanctuary in the Pacific Ocean last weekend when they discovered masses of dead sharks on the ocean floor near a rocky island miles from the mainland. The sanctuary is intended to be a safe haven for threatened marine species — especially sharks.

“When the divers dove, they started finding a large number of animals without their fins. They didn’t see any alive,” Sandra Bessudo, a top government Columbian adviser on the country’s environmental issues, told The Guardian.

Many other divers noted seeing a number of fishing boats illegally in the area around that time.

The Columbian navy did an immediate, extensive search of the surrounding waters after the shark killings were made public. The navy stopped an Ecuadorian fishing boat that had illegal catches (including sharks) on board, but authorities are doubtful the fishermen were responsible for the shark massacre. Based on reports, the Columbian navy believes Costa Rican fisherman might be responsible for the poaching.

Shark finning is a widespread form of poaching, largely due to a high demand for shark fin soup in various countries.