85-Year-Old Woman Batters Moose With Shovel to Save Husband

Everything in Alaska is colder, harder and tougher, and that includes the elderly. Eighty-five-year-old Dorothea Taylor saved her husband, George... 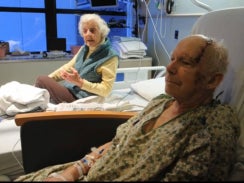 Everything in Alaska is colder, harder and tougher, and that includes the elderly. Eighty-five-year-old Dorothea Taylor saved her husband, George Murphy, from imminent death by moose stomping on Sunday, by batting an attacking Bullwinkle repeatedly with a shovel.

Thanks to this tough gal, George survived the moose attack, and is now recovering from a six-inch gash in his head, gashes in his left leg, and seven broken ribs, according to the Anchorage Daily News.

Dorothea and George were walking their dogs–Fellar and King Tut–at the Willow Airport near Anchorage, Alaska. Taylor went back to the car to get warm while Murphy rounded up the dogs. Then Murphy saw a moose running straight for him. He tried to make it back to the truck, but there was no time.

With no trees to hide behind on the tarmac, Murphy dove into the snow to hide. The moose was not deterred from his stomping when the dogs bit at his legs and barked at him, the only thing that stopped him was Taylor’s shovel.

“Well, we’ve helped each other out of problems before. This just happened to be the latest,” Taylor told the Daily News.