A great white shark of nightmare proportions was accidentally netted in the Sea of Cortez Sunday by two commercial fishermen.... 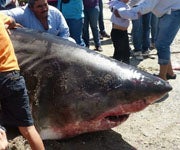 A great white shark of nightmare proportions was accidentally netted in the Sea of Cortez Sunday by two commercial fishermen. The kraken measured almost 20 feet in length and weighed around 2,000 pounds. The two fishermen, identified by Pisces Sportfishing in Cabo San Lucas only as Guadalupe and Baltazar, were fishing on a boat that measured only two feet longer than the shark.

Despite the fact that the predator was dead when hauled in, the two fishermen still admitted to being shocked. Guadalupe told Pisces Sportfishing’s Tracy Ehrenberg, “We were amazed and immediately realized that we had a huge, dead, great white shark, and then we thought what are we going to do?”

To put the size of this leviathan into perspective, consider that a 2012 Chevy Suburban measures 18.5 feet in length, roughly a foot and a half shorter than the shark. At 2,000 pounds, the shark’s weight is equal to approximately 10 American males. The shark was so big it took 50 people to drag it onto the beach.

White sharks were once considered rare in the Sea of Cortez, now marine biologists believe it to be a nursery for the species. Rarities aside, Pisces Sportfishing reports that fishermen in the same area caught a 990-pound white shark last month.