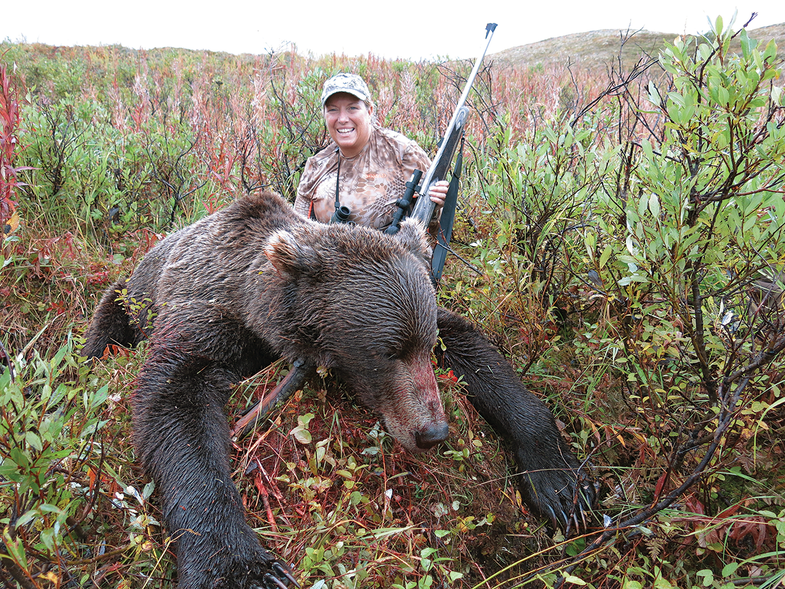 You could say that Linda Powell hunts bears for a living the same way you could say a tenor at the Metropolitan Opera sings for his supper. It’s technically correct, but it doesn’t get at the half of it. Powell, who currently manages media relations for Mossberg Firearms (and previously held the same job for Remington Arms), has hunted bears all over the world as one aspect of her job. She has killed 20 bears over the past 20 years. She’s hunted by most methods available, and with partners whose names are familiar to most consumers of outdoor media. Why is she so preoccupied by bears and bear hunting? Best to let her explain it herself.

“Even before I became a hunter, I was fascinated by bears. I grew up in North Carolina, and my family vacationed in the Great Smoky Mountains. We’d see trails along the roads, and my parents told me they were bear trails, so every time we went to the mountains, I had an expectation of seeing bears. And I always, always looked for them.

“I got married over fall break in college. Our honeymoon? To the mountains to see bears.

“The thing is, I didn’t grow up as a hunter. But I went to work for Remington, and the guys there got me shooting and then hunting. My first industry hunt was a muzzleloader bear hunt in Maine. Some hunters get their start with rabbits or birds. I started with a bear, and the minute I walked up to it, I knew I had become a hunter. Other hunters talk about their evolution over time, but for me it was that one animal and that single minute in that special place.

“It was a small bear. Looking back on it, it was probably a 2-year-old, and maybe a 5-footer. When I got back to the office and showed the guys my pictures, they laughed and said, ‘What are you going to do with Boo-Boo’s hide? Make a bath mat?’ For a moment, I wasn’t sure I wanted to be a hunter. They made me feel momentarily bad about what I had done. But you know, I turned to them and said, ‘How many of you have shot a bear?’ Nobody raised a hand, and I realized right then that hunting is personal. It’s about the experience, not the size or the quantity of the game. You don’t have to explain it to anyone. 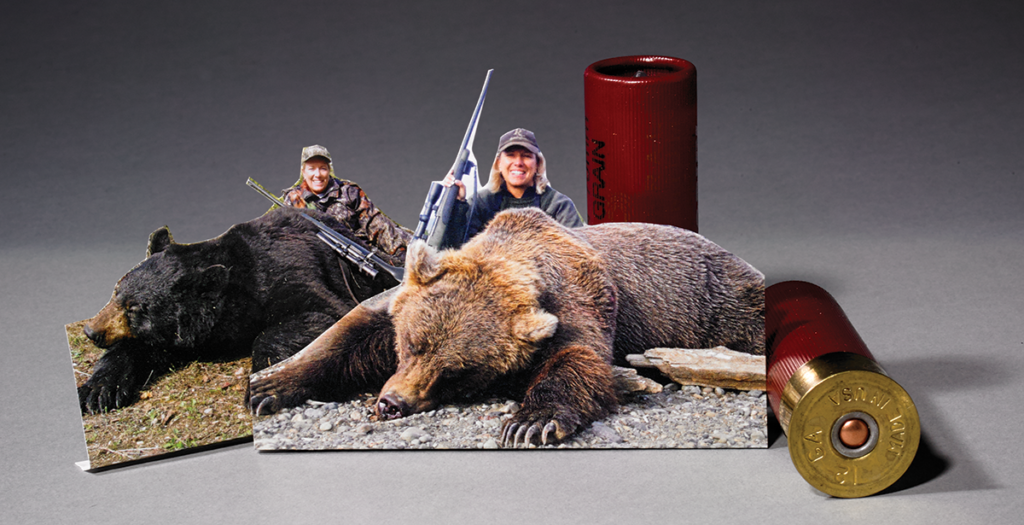 “Since then I’ve hunted bears over bait, spotted-and-stalked, hunted with dogs, and predator-called them. I have killed all the color phases of black bears except blonde. I had a shot at a blonde bear in Alberta, but it was a small bear, and I passed. My first grizzly was on Alaska’s Aniak River with [writer and OL contributor] Frank Miniter. I killed a Russian brown bear in the Russian Far East, and I killed my second brown last year in Alaska last year with [OL shooting editor] John Snow.

“My most memorable hunt might be in my home state of North Carolina. It was a hound hunt in the coastal swamps for bears that have such abundant food—and they don’t hibernate—that boars can go 500 pounds and bigger. You hunt them in the morning as they move from fields to the swamp. On this particular day, we didn’t get them in transition, so we released the hounds in the swamp and followed them in. It’s nasty, tangly country. We ended up following the dogs for four hours and the bear never treed, so we called off the dogs.

“The easiest way to get out of the swamps was to swim a canal to get to higher ground. I handed my gun to my guide and swam. I made it, but my guide got into trouble. He went down three times, the last time with my rifle. We rescued him first and then went back for my rifle, which was in my favorite bear caliber of all: .300 Winchester Short Mag.

“The next morning, we treed a bear. The guides asked me if I wanted it, and given how tough the hunt had been, I didn’t hesitate. It ended up being a 330-pound sow, the third biggest killed in Hyde County, North Carolina. 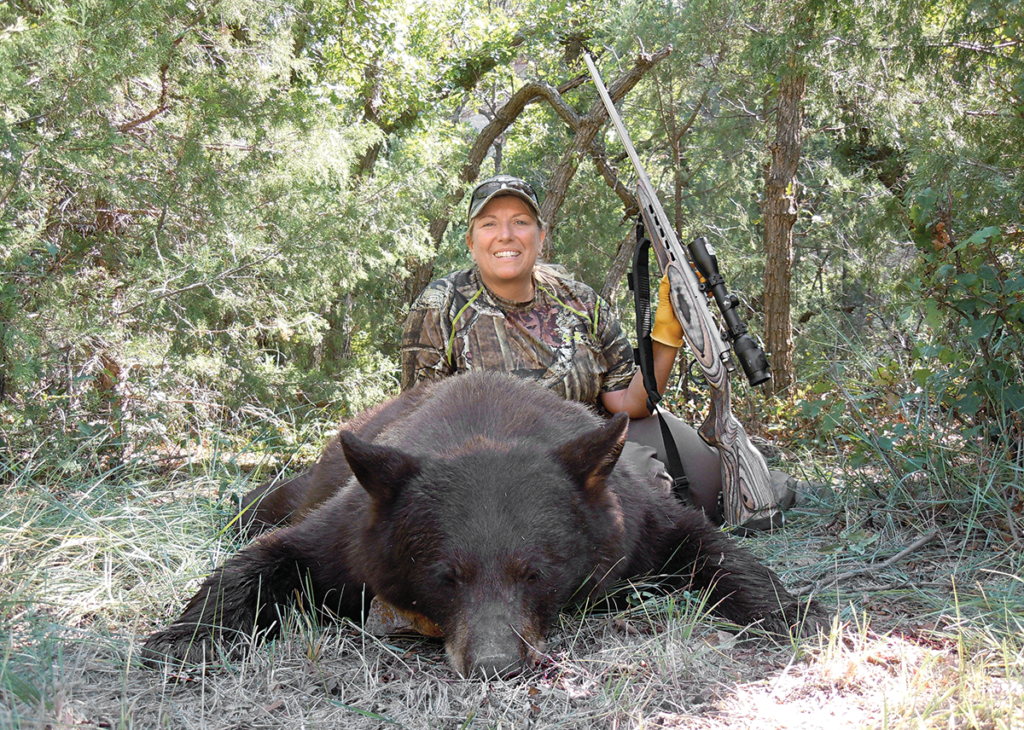 “I’ve killed a number of 6- and 7-foot black bears, but my largest was an 8-footer from Alberta.

“I like the fall season for grizzlies and brown bears, but I love the spring season for black bears. You get the whole experience—the country coming alive and the bears coming out of their dens. The weather and the company are both a big part of any hunt. In spring of 2002, on a black bear hunt in British Columbia, both Pat McManus and Jim Zumbo of Outdoor Life joined me. There was so much snow that the bears climbed high in the trees to feed on buds. So we rode around, looking up for bears. Pat and Jim wrote their respective versions of the same hunt in a Feb./Mar. 2003 Outdoor Life piece they called ‘The Bear Naked Truth.’ 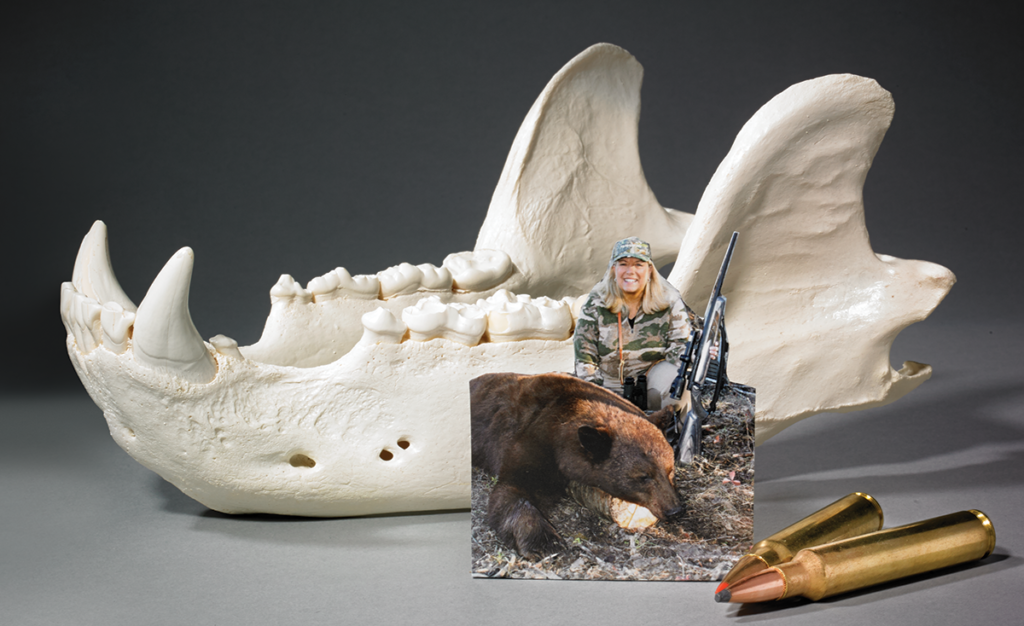 “I have a house full of bear parts. I have every skull but one, and I’ve kept the penile bones from all the boars. I’ve gifted bear rugs to special people in my life. I have a full-body mount of a griz, and three-quarter and half mounts of bears. I have a lot of bearskin rugs.

“Bears are just so interesting. They are curious, smart, responsive, and adaptable. And I just love bear country, whether it’s a salmon river in Alaska or a dark swamp in North Carolina. There is no animal that’s more difficult to judge—not just in terms of size, but also personality. Every single time I see a bear, I get a jolt of adrenaline. My heart pounds and I get excited. I don’t have to kill a bear in order to enjoy them. But I still like killing them, and I love taking other people with me, especially first-time hunters.

“I don’t expect to ever get this bear itch out of my system. This year, I have bear tags in Alberta and on Vancouver Island. I can’t wait.” 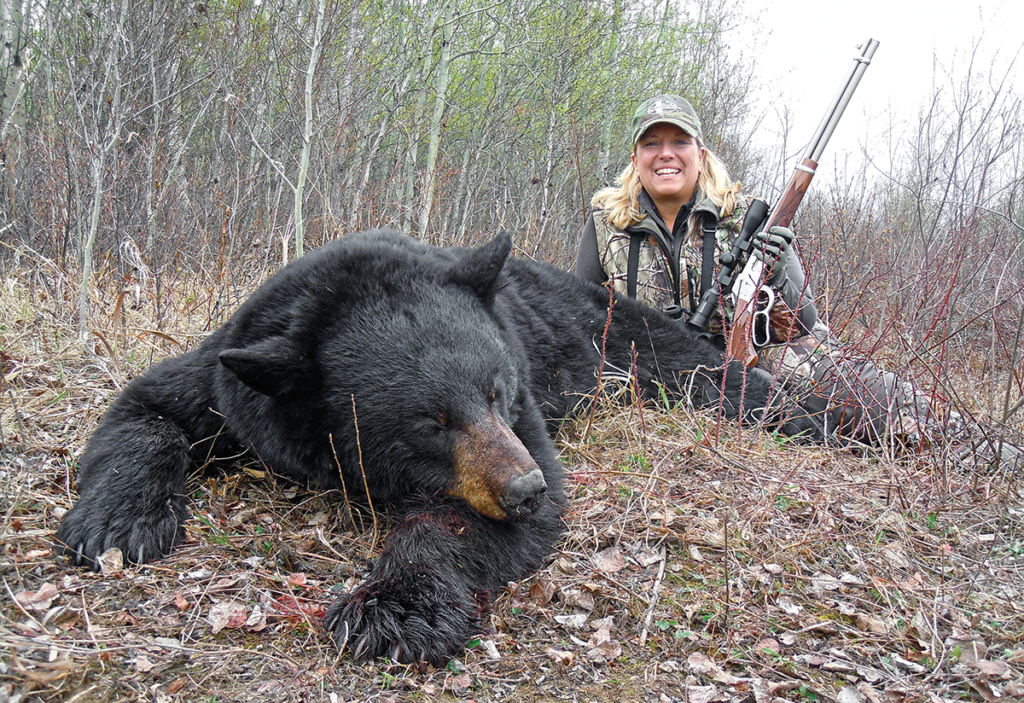 Powell’s Bears, By the Numbers

2002
British Columbia, with McManus and Zumbo. Passed on small bears