Most of the time, wolves stay away from hunters and wolf attacks in the U.S. are almost unheard of. But,... 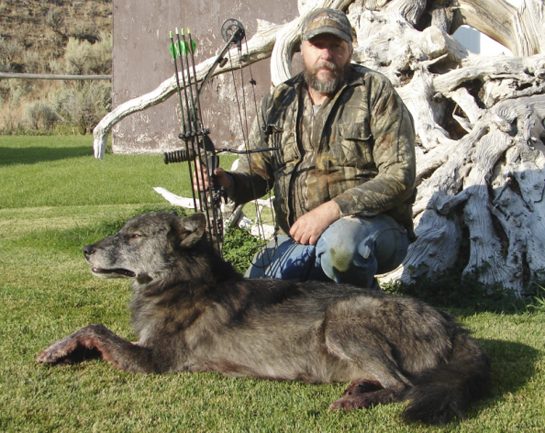 Most of the time, wolves stay away from hunters and wolf attacks in the U.S. are almost unheard of. But, as Idaho elk hunter Rick Pearce can tell you, this isn’t always the case.

Pearce was bowhunting for elk in the upper Squaw Creek when a pack of wolves responded to his cow calls and bugling. Pearce had a wolf tag, so he kept calling to see what they would do.

He told the story to the Challis Messenger: _”Five wolves heard the dinner bell and came to within 70 yards of his position. The alpha female had two pups that started circling, one to the left and one to the right.’I knew they were flanking me and didn’t want it to go farther,’ Pearce said.

Then, a sixth wolf Pearce hadn’t seen before sneaked in behind him, coming within 40 yards. Pearce could hear the large animal, probably the alpha male of the pack, panting behind him.

‘It made the hair on the back of my neck stand up,’ Pearce said.

Pearce made a 70-yard shot with an arrow, which hit the wolf in the right front leg and passed through the rib cage. The wolf went down, then made its way into some timber. Pearce followed the blood trail. The wolf got up, growled and lunged at him. Pearce finished him off with his .22 caliber pistol.

As Pearce got his ATV to retrieve the carcass, the other wolves kept circling, staying within 60-70 yards.

‘I thought it was kind of strange they hung around,’ Pearce said. ‘People assume they will take off and run.’ These wolves, however, were pretty aggressive, he said.”_