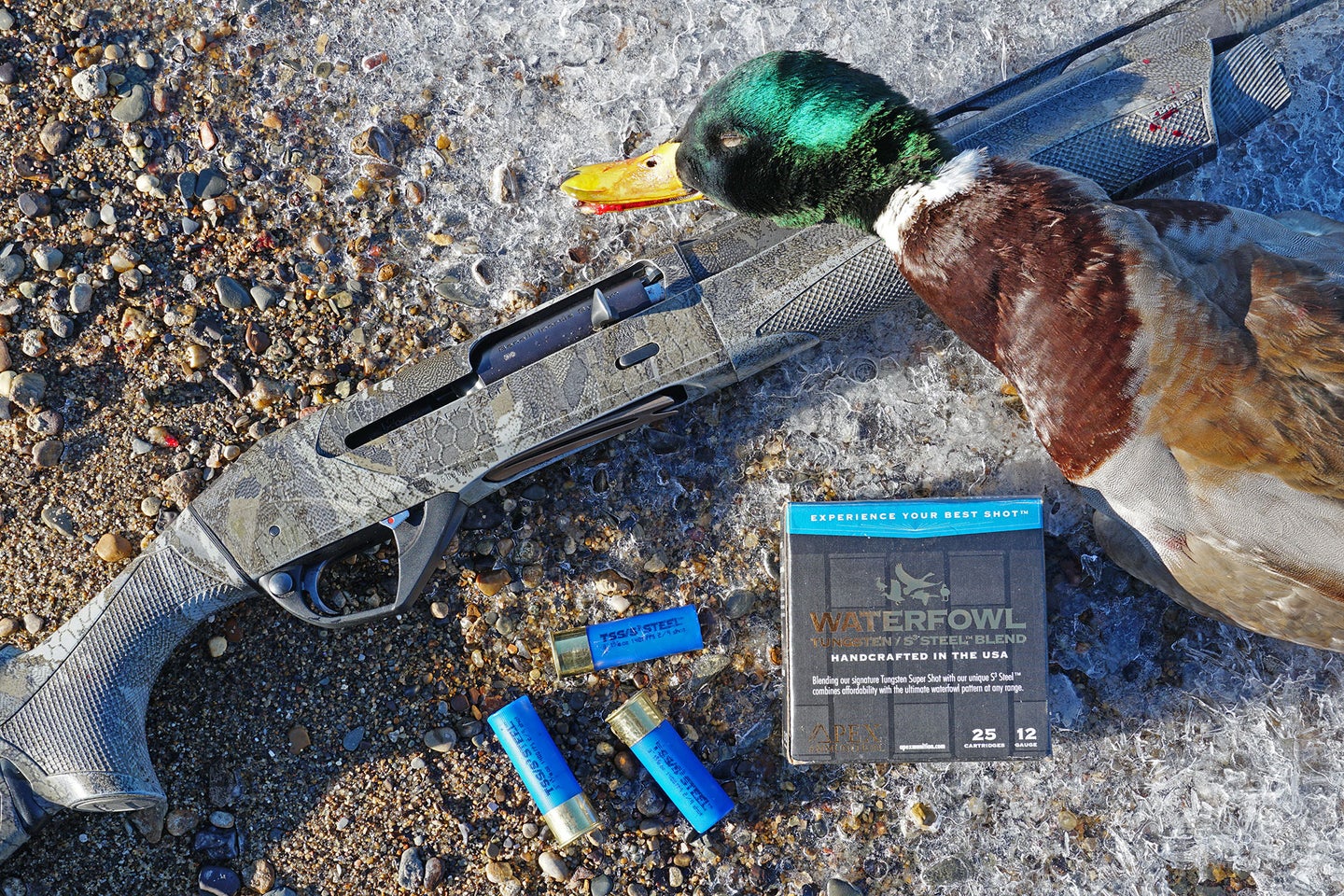 There’s nothing like killing a strap of late-season greenheads to make you fall in love with a new shotshell. And on a Missouri River hunt earlier this month, I was falling hard for Apex Ammunition’s WS-3 shells, which combine steel No. 2s and TSS No. 9s. Because of the light, shifting wind, mallards were circling and then hooking behind our hide in the cattails before cupping over the decoys. That meant a few high, overhead shots at some of the toughest ducks out there. But those greenheads were also falling hard.

For a few years now, Tungsten Super Shot (TSS) has been all the rage in the shotshell world. These super-dense (18 g/cc) little pellets (usually No. 7s or No. 9s) make for denser patterns because you can load so many into a shell. They also retain more energy downrange because of their density and because their small surface area creates less drag. The problem, however, is that TSS is incredibly expensive. A box of 10 (yes, 10) will cost you anywhere from $50 to $100. Ammo companies solve this by stacking shells with a combination of TSS and steel shot. That way you don’t have to pay for a whole payload of tungsten. Hevi-Shot helped start the trend with its now discontinued Hevi-Metal load, which stacked tungsten-iron pellets with steel. Federal has its Blackcloud TSS which is loaded with 60 percent TSS and 40 percent steel. This is a killer load, but it’s pricey at $51 for a box of 10. Then there’s the Apex WS-3 loads, which are packed with a ¼ ounce of TSS and 1 ounce of steel shot. They go for $46 per box of 25—just about $10 per box more than the most expensive steel loads—and they’re one of the most affordable options for duck hunters who want to shoot TSS. Apex introduced their stacked loads in 2017, but they took a while to gain popularity.“It was slow to catch on from a demand standpoint, but it’s now a top seller” says Jason Lonsberry, CEO of Apex Ammunition, a veteran-owned company based in Columbus, Mississippi. “Customers began to understand the value of each shell and its ability to outperform any other shell in its class of blended loads.”

But does that quarter ounce of TSS really make a difference? In my experience yes, it does. But first, a caveat. This is not a super long-range load for killing ducks at 60, 70, or 80, yards. If you’re concerned about shooting birds at those ranges, I’d suggest spending less time reading about shotshells and more time getting better at calling, decoying, and hiding. This load is made of 80 percent steel pellets, which don’t have the density to be consistent long-range killers. That said, these shells printed excellent patterns at 40 and 50 yards, which should be the max range for most of us waterfowl hunters anyway.

I shot 3-inch 1¼-ounce WS-3 loads from my Benelli Super Black Eagle 3 with a 28-inch barrel and Patternmaster Long Range choke. Apex says this version of the shell held ¼ ounce #9 TSS and 1 ounce of No. 2 steel (Apex also makes combinations of No. 4 and BB steel shot mixed with either No. 9 or No. 7 TSS).

I cut the shells open and found they held 90 TSS pellets and 140 steel pellets for a total count of 230. Interestingly, 140 steel pellets is more like the amount you would get with a 1 1/8-ounce shot charge, according to standard pellet count charts. But the 90 pellets of TSS adds up to ¼ ounce, as advertised.

I patterned the loads in true waterfowl hunting conditions. It was an 18-degree December day and I was shooting through a 15 to 20 mph crosswind, with gusts up to 25.

Out of my five best 40-yard patterns, I averaged 173 hits inside a 30-inch circle. At 50 yards, I averaged 124. These numbers are outstanding, and diving deeper, they get even better. With Apex’s standard steel-only load, I printed a pattern with 117 hits on a 40-yard target, which is about what I expect out of my gun. At an extensive test we conducted in Texas, our test team was getting 110 to 125 hits out of the best shotguns for duck hunting while shooting standard No. 2s at 35 yards. Impressively, the Apex loads were averaging about 50 pellets more than those standard steel test loads (which were patterned at a closer range).

With the Apex WS-3 loads, I was seeing an average of 76 percent of the pellets in the shell hit the target. In collecting the data, I marked TSS hits in red and steel hits in black (see the photos below). It was easy to tell the difference between the tiny No. 9 holes and the big No. 2 impacts. I found that the TSS was on target at a higher average (82 percent) than the steel (70 percent). This is likely because the TSS pellets are small, dense, and extremely hard. This combination makes for fewer fliers and less negative impact from the cold and wind downrange.

As for muzzle velocity, Apex prints 1,400 fps on its box. Years ago, when I tested muzzle velocity of these loads (and a bunch of custom duck hunting loads) at the Federal ammunition’s factory, Apex WS-3s actually averaged 1,450 fps, though this was through a 30-inch test barrel.

After seeing the tight WS-3 patterns shot out of my Patternmaster Long Range choke, I’ll probably screw in a Modified choke for most of the season (to open up the pattern a little) and then switch to a tighter choke for late-season mallards, divers, and geese.

In the field, where it counts the most, I found that I was killing tough late-season mallards, not crippling them. Killing birds cleanly is always important, but it’s absolutely critical when hunting big water like the Missouri River.

It was good to see the concept of a stacked load perform in the field. The general idea behind a stacked or blended load is this: The TSS pellets fill in the gaps in the pattern between the steel pellets. Pattern density and consistency are keys to killing birds cleanly. And those No. 9 TSS pellets are ballistically similar to a No. 5 steel pellet, Lonsberry says.

In the Apex shells, the TSS pellets are loaded first, with the steel stacked on top to improve the pattern and shorten the shot string.

“There is no difference in muzzle velocity between the TSS and steel, but the steel pellets slow down quicker due to their size and density,” Lonsberry says. “They leave the barrel at the same velocity but upon exit, the deceleration begins. The larger surface area with the lower density slows the steel down quicker and within 20 yards, TSS begins to pass the steel.”

This means that at longer ranges, your shot string will stretch out witth the TSS pellets in front and the steel pellets behind. Lonsberry says that Apex doesn’t have baseline data on how much the shot string lengthens down range because there are so many variables (gun, choke, and conditions) involved. This is just one more reason to avoid shooting birds at long range. Keep your shots at reasonable distances, shoot well, and the shell will do its job.

Ultimately, this is still an expensive duck hunting load and it’s not going to be worth it for every duck hunter. But these days, most hunting ammo is expensive. If you’re a waterfowler looking to take advantage of the incredible performance that TSS pellets offer, this is one of the most affordable ways to do it. The patterns are impressive, and so is the performance in the field.