Scoring 446 and 0/8 inches, the "Dagger Bull" crushes the previous state archery record and will go down as the second biggest bull elk ever taken in Pennsylvania 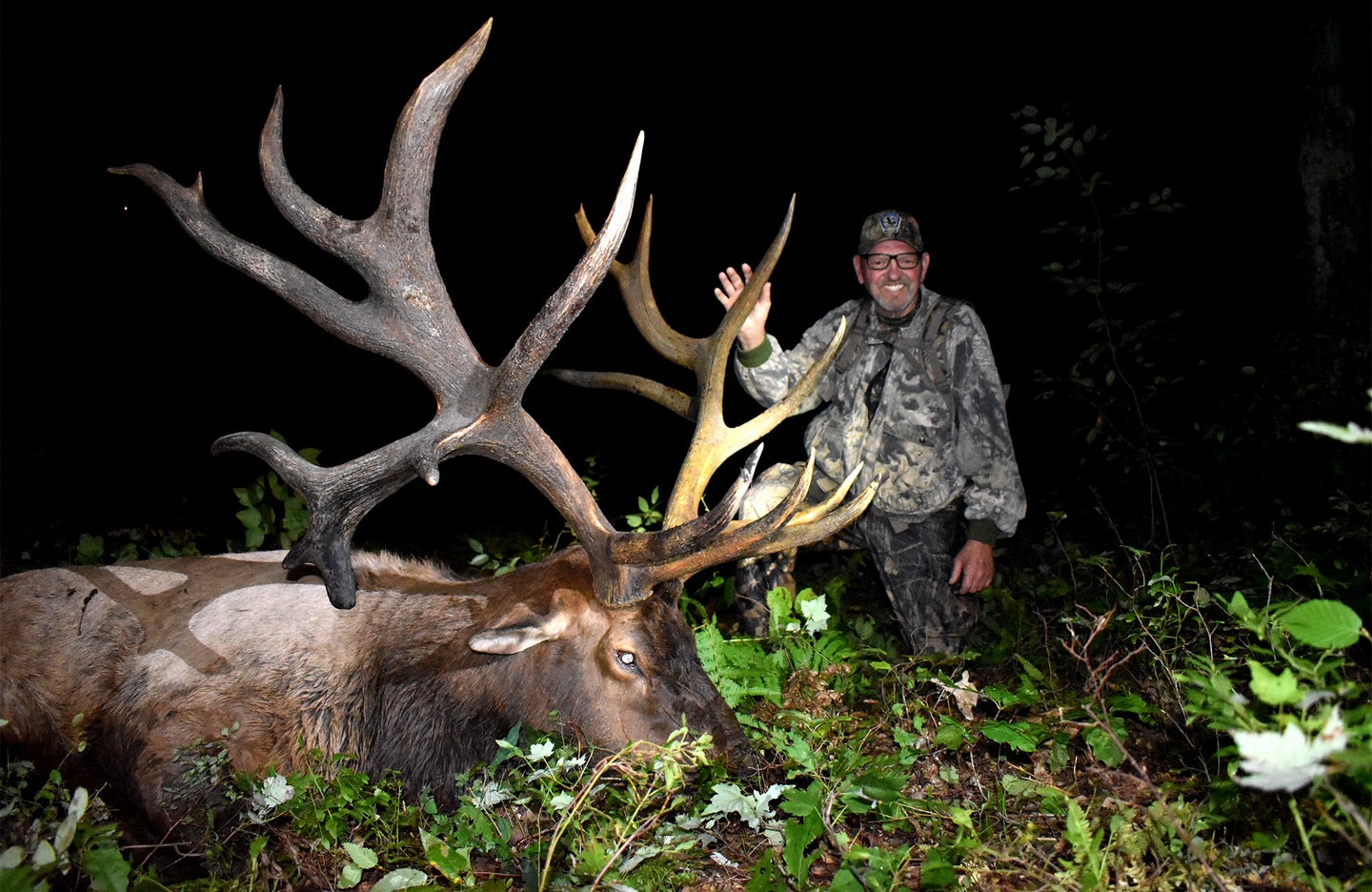 Dave Kammerdiener got one hell of a birthday present this year. After 21 years of applying for a bull tag in his home state of Pennsylvania, he finally drew one this August. A few weeks later, with some help from the guides at Trophy Rack Lodge, Kammerdiener killed the biggest archery bull ever taken in Pennsylvania. He tagged the bull on Sept. 15, the same day he turned 66.

Nicknamed the “Dagger Bull” by Kammerdiener’s guide, Matt Lutz, the bull’s rack was officially measured by a Boone and Crockett scorer on Sunday, Dec. 12. The 11×7 non-typical giant scored 446 and 0/8 inches (462 and 2/8 gross). In addition to crushing the current state archery record of 400 and 2/8 inches, Kammerdiener’s bull will also go down as the second largest Pennsylvania bull ever taken by a hunter with any weapon.

“Whenever I drew this tag for Pennsylvania, I said it was like me winning the lottery,” Kammerdiener says. “And when I got this bull, it was like hitting the Mega Millions.”

Kammerdiener has applied for one of Pennsylvania’s coveted bull tags every year since the state Game Commission opened its first modern elk hunting season in 2000. After accumulating preference points year after year, decade after decade, his name was finally drawn this summer.

Now retired from his career as a heavy highway carpenter, Kammerdiener says he’s hunted whitetails with a compound bow for many years. He now hunts with a crossbow due to a rotator cuff injury, and when he learned that he’d drawn the tag in late August, he only had three weeks to get ready before the season opened on Sept. 10. (Pennsylvania’s regular archery season runs for two weeks, excluding Sundays, from Sept. 10 to the 24.)

“I hadn’t even started practicing for archery because [deer season] doesn’t come in until October here, so I thought I’d better start,” Kammerdiener tells Outdoor Life. “I was putting them in a grapefruit-sized target at 50 yards and putting them in a paper plate at 60. But 50 is quite a poke and I thought that was about my limit.”

Kammerdiener decided to go with an outfitter, since this would be his first and likely his last chance to chase elk in Pennsylvania. (PGC requires hunters who draw elk tags to wait five years before applying again, which means Kammerdiener will have to wait until he’s 71 to even have the opportunity to draw another tag.) After speaking with a couple local outfitters, he booked his hunt with Trophy Rack Lodge, which is owned by Larry Guenot.

“I met with Larry, and he told me, ‘I’m gonna put you in front of a 400-class bull. My guide Matt has been after this thing for years.’ And I’m thinking, Yeah, sounds like a car salesman to me.”

Calling the Dagger Bull Into Range

As it turned out, Kammerdiener, his guide Matt Lutz, and his friend Bud Sagle, who joined them on the the hunt, would catch a glimpse of the record-breaking bull on the opener. It was the second elk they’d heard that morning, and Lutz recognized the bugle right away. It belonged to the same monster bull he’d been chasing for the past two years.

“Matt called this one the Dagger Bull,” Kammerdiener says. “He got him on a trail camera a couple of times and said he had finally showed back up this season. ‘That’s the one we’re after,’ he told me.”

The bull slipped back into a dense patch of trees with a few cows by the time it warmed up that afternoon. This pretty well summed up their routine over the next four days of hunting: wake up early and hike six to 10 miles by midday, then head back to the lodge for the afternoon before setting out again for an evening hunt.

“He would come pick me up every morning, and we’d walk back along gated roads onto state game lands,” Kammerdiener says. “Matt’s about 120 pounds soaking wet, and he moves like a gazelle. I don’t know how he moves so fast, but I’d almost have to run to keep up with him.”

On Sept. 15—his 66th birthday and his fifth day chasing Lutz through the Pennsylvania woods—the three were joined by another guide, Abner Druckenmiller, who’s an experienced elk caller and the sales director at FOXPRO game calls. Druckenmiller cow called through the morning and drew the Dagger Bull within earshot, but again the bull stayed out of range. Druckenmiller also called in a big 6×6 that morning. The bull walked well within Kammerdiener’s range, but he passed on the bull and they headed back to the lodge for the afternoon.

Sometime after 4 p.m., Lutz, Sagle, and Kammerdiener hiked back into the same area on state land. Pretty soon they heard the Dagger Bull bugle again. Afraid of pushing it even deeper into the forest, they waited in a meadow on the edge of the timber and tried to call the bull into the open. Slowly but surely, the bull worked its way toward them, and Kammerdiener finally got his opportunity about 15 minutes before legal shooting light expired.

“During the last five minutes he really closed in. Matt gave a cow call, and right before he stepped out into the field, Matt’s telling me: 50, 45. Shoot. Shoot,” says Kammerdiener. “I had a heck of a time because I wanted to make sure I had a good shot on him, but when I let her rip, it sounded like I hit a five-gallon bucket.”

When Kammerdiener looked back at his guide, Lutz was shaking more than he was. Two years of hard work and scouting had finally paid off, and Lutz took them back to the lodge, where they waited until 11 p.m. to start tracking. It didn’t take long to recover the bull once they found a blood trail. Kammerdiener’s bolt had passed through both lungs and nicked the heart. When he saw the elk piled up in a patch of ferns, Kammerdiener started shaking too.

“Those ferns were about four foot high,” he says. “I looked down and saw horns sticking up, and I’m like holy hell. I get down there, and oh my God is this thing huge.”

Kammerdiener sent in the Dagger Bull’s official scoring sheet to the Boone and Crockett Club on Monday, and the PGC will add the bull to its record books after it’s verified by the club. It seems that the Dagger Bull will also take its place in the B&C record book, as Larry Guenot claimed in a recent Facebook post that not only is Kammerdiener’s bull the second biggest elk ever taken by a hunter in Pennsylvania—it’s also the seventh biggest non-typical bull ever taken according to club records.