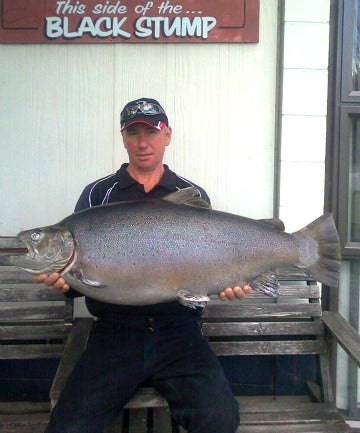 Evan Johnson of Timaru, New Zealand set a national record Monday when he landed a female brown trout weighing 39.7 pounds, according to the Timaru Herald. And although the International Game Fish Association record for a brown trout is listed at 41.5 pounds, Johnson’s catch is a female, and will likely set the world record in that category.

Johnson was threadline fishing in the Upper Waitaki hydro canals. The trout went for his Tasmanian Devil lure and put up a solid 20-minute fight. When Johnson finally managed to bring it close enough to grab, the trout broke his net as he pulled it from the water.

Huge trout like Johnson’s brown aren’t unusual catches in the area. In 2002 American angler Mike Was landed a 37.4-pound rainbow trout. One year later, New Zealander Tony Washington caught an even bigger rainbow that weighed in at 38.5 pounds.

Some anglers in the area argue the monster fish pulled from these canals aren’t legitimate catches. Many of the canal fish live under salmon farms, where they subsist on feed that falls through the cages. Others argue a great deal of effort and skill still goes into landing fish that size.

Do you think these canal catches are legitimate? Comment below!