How to Fish With a Cane Pole 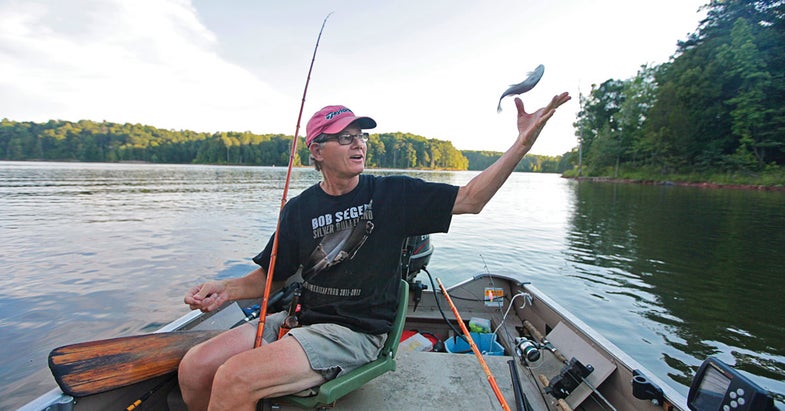 Let’s turn back time. Go back 85 years and look at the cover of Outdoor Life. The illustration shows a hillbilly youngster holding a cane pole, worm dangling from the hook and a limit of fish splayed on a tractor tire. The boy is accepting money from a sharp-dressed flyfisherman who is buying his catch after a fruitless outing. The lesson is timeless: Simplicity in fishing often outperforms more complicated means of eliciting a bite.

This is a concept Billy Williams, a 64-year-old North Carolina native, learned as a youngster. And today, he still believes that using 12-foot lengths of bamboo is the best means by which a fisherman can target sunfish.

“I always have cane poles in my boat, no matter what I’m fishing for, no matter what time of year. You can’t beat them for slaying bream,” he says. “Here’s the deal: If you are flyfishing with a popping bug, you can pull a couple of fish out of a spot, but the area gets really disturbed. A little spinning rod can work, but again, those fish can get away from you and mess up the school you’re targeting. With a cane pole, you drop your bait in and pop those fish straight out. It’s all about low commotion.”

Righteous Rigging
Williams’ setup is about as simple as it gets. He starts with a 12-foot bamboo pole blank. To the tip, he uses a nail knot to tie a length of 20-pound mono, leaving a long tag end on either side. He twists one end down the length of the pole to where the backbone begins, then ties another nail knot below a knuckle on the pole. “You can hook into some big fish, and if the tip breaks, you want that leader tied to a stout part of the pole. Although you’ve lost the pole if the tip breaks, at least you won’t lose the fish!”

To the other end of the 20-pound mono, Williams adds a length of 10-pound mono that’s just a bit longer than the pole. He then attaches a tiny bobber with a center insert to allow for changing depths. A small split-shot weight above a long-shanked No. 4 or No. 6 gold hook completes the rig.

When Williams was growing up, crickets and catawba worms were his bait of choice, but he now uses red wigglers exclusively.

“Those big ole shellcrackers would rather eat a red wiggler than anything, I think. Get this bait on or near the bottom, and if a redear is nearby, you will catch it.”

Although it seems basic enough, there is something of a science to accurate presentation. “You don’t want to just swing your bait to an area, because it makes too much noise when it hits the water. You want to dip your rod to give the bait momentum, lift it slightly, and at the end of the swing, dip your rod again. You should be able to gently set your worm on the head of a quarter once you finally get the hang of it.”

For bank fishermen, the benefit of the pole is significant. When you’re fishing a bank where submerged grass extends several feet out, reeling your rig through the grass results in snagging the cover and ruining a good spot. There is no better way to place and retrieve your bait than a straight lift.

Williams touts other benefits cane poles have over rod-and-reel combinations. “I think this is the best way to bring kids into fishing. They don’t have to cast, so no backlashes to pick out. And, you can always find bream biting, so you aren’t fishing, you’re catching, which keeps the kids from getting bored.”

That old piece of bamboo won’t see the water again for fear of a fish’s breaking it, but it frequently reminds Williams of times when he and his father simply—very simply—caught fish.

Back in the day, cane poles could be bought at just about any rural hardware store. Now, not so much. So as a budding cane-pole angler, what do you do? Build your own. Find a stand of bamboo. (Some folks grow groves in their yard; your local forest likely has some growing wild; or, worse case, go to a local nursery and buy living bamboo.)

You want a piece about 10 to 12 feet long, with a base that’s about an inch in circumference. Cut the bamboo below the knuckle closest to the dirt. Once it’s cut, you want to cure the piece for several weeks. It’s best to hang the pole upside down so it dries perfectly straight. Once the bamboo has turned from green to a golden hue, you are ready to prepare it for fishing.

Sand the base to a flat, splinterless edge. Sand the remainder of the pole to remove blemishes. The tiptop should be cut just above the thinnest knuckle, which is where you will tie your line. If you want to make it pretty, add a finish of wood lacquer. Once it has aged, it is much lighter—perfect for a long day on the water.