“It was an expedition, an adventure. I’ve never done anything like that,” is how Jim Sollecito describes his journey to... 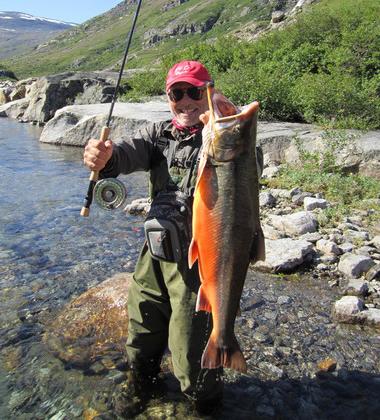 “It was an expedition, an adventure. I’ve never done anything like that,” is how Jim Sollecito describes his journey to the edge of nowhere to land a potential fly fishing record Arctic char.

The fishing trip of a lifetime began when Sollecito, a Baldwinsville, NY resident, met French Canadians Keith Richardson and his son, Patrick, last summer while salmon fishing at Big River in Labrador. The three got to talking and decided to head even farther north the following year.

The group began their trip on July 28 when they flew a float plane to Tasiujak Lake. Sollecito, 59, said the going was tough, the weather was bad, but the fishing around camp was great. “It was tremendous fishing,” Sollecito told Syracuse.com. “We were casting egg sucking leeches and muddler minnows. We were landing countless lake trout up to 12 pounds – and there were some we couldn’t land that were probably pushing 30 pounds…”

After four days of fog, Ouellette and Sollecito were helicoptered to a series of unnamed rivers some 50 miles from camp.

On the last day of the trip Sollecito, hooked into the pending record book Arctic char with a No. 4 muddler minnow. “It was a giant fish and fortunately it stayed in the pool where I was fishing,” he said. “I beached it and conked it on the head with a rock,” he said. Sollecito then hid it in the water to avoid attracting bears. When the men returned to camp they found that the fish weighed 17 pounds, 8 ounces. An International Game Fishing Association member, Sollecito knew he had a record fish. “We took pictures and then filleted it,” Sollecito said.

Jack Vitek, a spokesman for the IGFA, agreed that Sollecito’s fish most likely will be a new world record in the fly fishing category for a 12-point tippet (leader). The current record in that category is a 17 pounder caught by an Australian angler.

“Everything looks good and is lining up nicely,” Vitek said. “He completed the application, had witnesses, had a photograph, sent us the tippet and we tested it. He also had the scale certified by the Syracuse Scale Co. and gave us proof of that. He should get approval in the next month or so.”