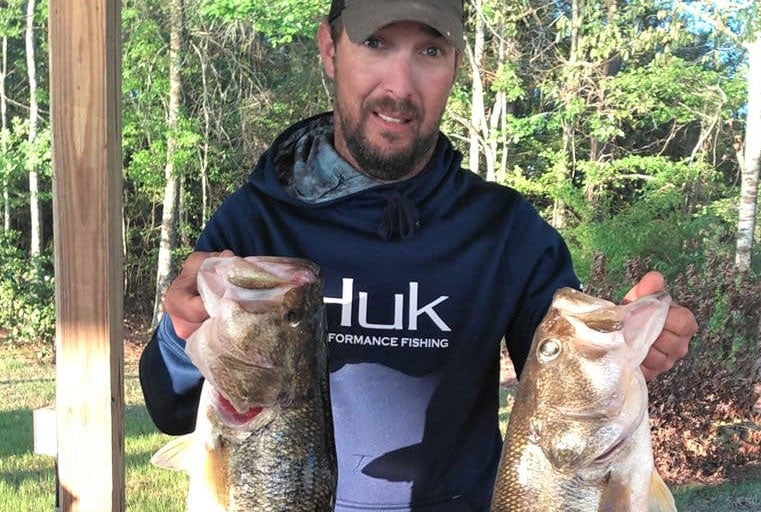 Caney Lake, southeast of Shreveport, Louisiana, has been a fabled bass fishery for decades thanks to Florida-strain largemouth bass stocking over 20 years ago. On March 28, Pineville, La., angler Dustin Chelette added to the lake’s storied legend. Chelette made two consecutive casts, catching a pair of trophy largemouths. Each weighed over 10 pounds, the largest nearly scaling 11 pounds.

The first bass tipped the scales at 10.17 pounds (26.5-inch length) and the second came in at 10.93 pounds (24 inches) Chelette released both bass back into Caney Lake.

He was fishing a slow-tapering weedy flat in 2 to 3 feet of water near the north end of Caney, a place he knew held spawning largemouths. He started catching small bass, and in time reasoned that bigger bass likely were deeper. So he moved his boat deeper on the slope, probing 4 to 6 feet of water with black-and-blue bass jigs.

Chelette soon hooked a better bass, but the fish didn’t fight well. He worked it close, lipped the fish, weighed it, and was stunned to learn it scaled 10.17 pounds. He deposited the fish in his boat’s aerated live well, and on his next cast to the exact same spot hooked a bigger, stronger, and much tougher bass.

The fish ran line, and doggedly was brought to the boat, where Chelette lipped the fish, and weighed it at 10.93 pounds. After catching two trophy largemouths on two casts, Chelette figured he’d had about as good a day fishing as possible and he headed in.

Back at the dock he found someone to take pictures of him and his fish, then released them back into Caney Lake.

Chelette figures the first and smaller bass was lighter (though longer than the second fish) because it had already spawned. The shorter, heavier bass, he says was full of roe and had not spawned.