A crocodile that has been blamed for killing four people on Lake Victoria in Uganda has been captured and if... 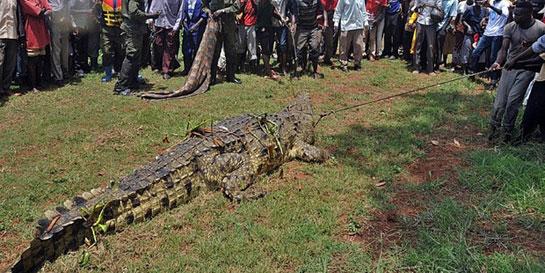 A crocodile that has been blamed for killing four people on Lake Victoria in Uganda has been captured and if reports are correct, the beast could be the largest of its kind in captivity.

According to Uganda Wildlife Authority (UWA) Sulani Tumanya the behemoth weighs more than a ton (about 2,300 pounds) and measures 18 feet in length, according to the New Zealand Herald. The previous record holder for largest known crocodile was a 21-foot-long, 1-ton saltwater crocodile named Lolong. That beast was captured in the Philippines and died at the age of 50 just last year.

Fishermen had been asking the UWA to do something about the problem crocodile for years but it wasn’t until the most recent killing of a fisherman from the town of Kakira that the agency intervened. They captured the man-killer after a four-day hunt.

The animal will be transferred to and released in Murchison Falls National Park.