Wendell Ko landed a 506-pound blue marlin the hard way: with a speargun. The avid spearfisherman was hunting two miles... 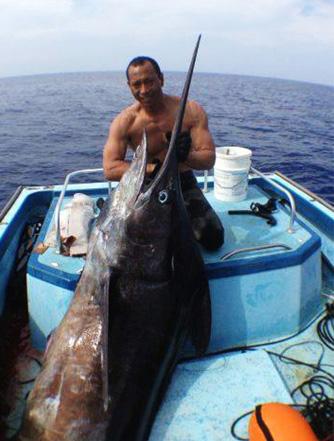 Wendell Ko landed a 506-pound blue marlin the hard way: with a speargun.

The avid spearfisherman was hunting two miles off the Kona Coast on Hawaii’s Big Island on November 20 when he spotted the monster fish cruising the depths. Ko told KITV, “It’s the first time I’ve ever seen anything that big in the water, a marlin in particular. It was hard to miss.”

The 53-year-old nailed the 12-foot long fish with a single shot then finished it off with a few more shots. The event was captured on video by Ko’s friend and producer of the TV series “Hawaii Skin Diver” Kyle Nakamoto.

“I call it [Ko’s shot] the money shot,” Nakamoto said to KITV. “I mean, it’s so hard and you need to be at the right place at the right time.”

“Basically, you’re up against another 3 or 4-foot spear gun that’s moving,” Nakamoto said referring the marlin’s bill. “If the fish is not wounded and it’s kind of going through its frenzy mode and you’re at the wrong place at the right time, then things can go wrong. But luckily, things worked out good for Wendell.”

Things could have very easily gone wrong for Ko though as the fish was more than three times his weight and more than twice as long as he is tall.