Rabbit-sized predators have invaded the Vancouver Island city of Port Alberni, B.C. and they are driving the residents hopping mad.... 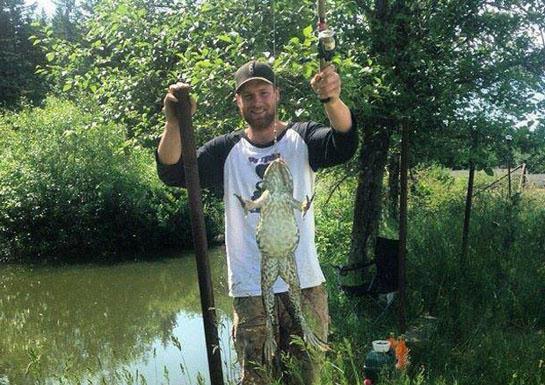 Rabbit-sized predators have invaded the Vancouver Island city of Port Alberni, B.C. and they are driving the residents hopping mad.

Port Alberni is suffering at the hands-and strong legs-of an army of American bullfrogs. No one is quite sure how the invasive species made it to the island, but some of the best guesses blame ornamental water gardeners who stocked their hobby ponds with the king-sized frogs. Failed frog-leg farmers who released their stock into the wild also make likely suspects. Regardless, these frogs are bad news.

Victoria-based bullfrog hunting contractor Stan Orchard explained to the National Post just how bad the frogs are for the community’s biodiversity. “They’re eating salamanders and garter snakes and hatchling turtles … songbirds that come down to the water’s edge to drink, baby ducks, waterfowl … everything that will fit in their mouth,” Orchard said.

The first sighting of the bulls came in 1989 when Orchard, then a herpetologist at the Royal B.C. Museum, was called out to investigate unusually large tadpoles that were spooking swimmers. “They were the size of golf balls with big long tails on them,” he told the newspaper.

Since then the voracious frogs have multiplied unchecked without the presence of any natural predators on the island. The beasts have gotten so bad that Orchard and his company BullfrogControl.com have developed a patented way of killing them. It’s called “electro-frogging” and it involves shocking the water from the safety of an inflatable raft, scooping up the stunned amphibians, and freezing them dead. This method has resulted in Orchard reportedly capturing as many as 300 in fewer than three hours.

That’s a lot of frogs.

Some have spoken up in favor of the frogs, citing how much they love listening to their dulcet croaking. But most agree this invasive species must be controlled.

“We’re wading into a problem that has expanded like a forest fire,” Orchard said. “If you put out a forest fire when it first starts, it’s a much smaller problem than letting it run wild.”