Call it the necrophiliac smack-down. In this insane video, which borrows videography from “The Blair Witch Project” and deadpan one-liners... 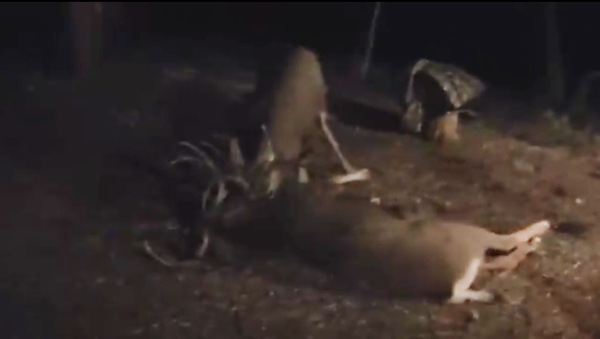 Call it the necrophiliac smack-down. In this insane video, which borrows videography from “The Blair Witch Project” and deadpan one-liners from any Chris Farley movie, an enraged 3×4 buck goes off on a freshly dead 5×5, goring it, repeatedly trying to get the dead buck on its feet, crashing its lifeless antlers, finally pushing the dead deer into a trash heap before leaving in a huff.

All I can say is that it appears the dead buck owed the live buck a significant amount of money. That’s the best explanation for the intensity and relentless violence the Colorado buck shows to his former rival.

The dudes in this clip, including videographer Brent Cutlip, were hunting the peak of the rut in Colorado’s Pike National Forest the second day of the state’s fourth rifle season. Cutlip tells us that they saw a number of bucks comparable to the bruiser 5×5 he killed, but that time and battle weren’t kind to the deer.

“Within a week after the season closed, the attacking buck had one completely broken antler and three of the four other bucks had broken tines. They were scrapping pretty hard.”