A turkey gobbles while walking away. Another hammers steadily–in range, unseen–but it won’t budge. One tom flicks both wings and... 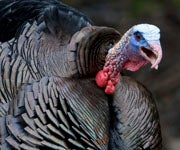 A turkey gobbles while walking away. Another hammers steadily–in range, unseen–but it won’t budge. One tom flicks both wings and turns to leave.

Another is far off and won’t come in.

Just what the heck are they thinking? We explain what’s going on in a turkey’s head …

The Courtesy Gobble
If a spring turkey courtesy-gobbles incessantly on the roost, then pitches down and gobbles while walking away, he’s saying his initial interest in your calls is fading fast. You’ve got three choices:
– Sit tight and let that bird drift off–others in the area might come in.
– Get ahead of the gobbler, anticipating where you can set up to call him in again.
– Wait and hope that he drifts back. Try switching calling strategies; gobble instead of hen yelping.

The Obstructed View
Terrain can often stifle a gobbler’s efforts to move toward you. If a bird hangs up, think analytically.
– Set up below or above the gobbler based on an imaginary line it might take walking toward you. Sometimes gobblers won’t cross big, open areas if they don’t see a turkey where they hear you calling.
– Slip forward five or ten more steps if foliage allows. If you can see the turkey strutting, move when its fan is turned and its head is hidden from view.

The Wing Flick and Turn
Busted! The gobbler decided to come to you, but he gave you a lousy shot opportunity. You waited for a better one, but the moment is gone. What’s a hunter to do?
– If he’s still in range, shoot him in the back of the head and neck.
– If he’s not in range, let him drift out of view. Call to get him to gobble. Get a fix on his location and reposition yourself a slight distance away to yelp him in.
– If he’s really walking away fast, let him go–relax. Pour yourself a cup of coffee. Eat a snack. Strategize, or just go find a fresh bird. Gobblers will sometimes drift away and return.

Dialing Long Distance
Have you located a spring gobbler that’s far off but seems interested? You can encourage him to approach your setup position by mixing tactics.
– If terrain allows, close the distance, checking him on occasion with a locator call. Stake out a realistic hen decoy to provide visual encouragement.
– Try a lost-hen call–a long string of pleading, raspy yelps–in an effort to make contact. Use a box call to crank up the volume to put him right in your lap.