Float a River to Find a Turkey Hunting Hotspot

Hit the water when river valleys overflow with spring gobbles 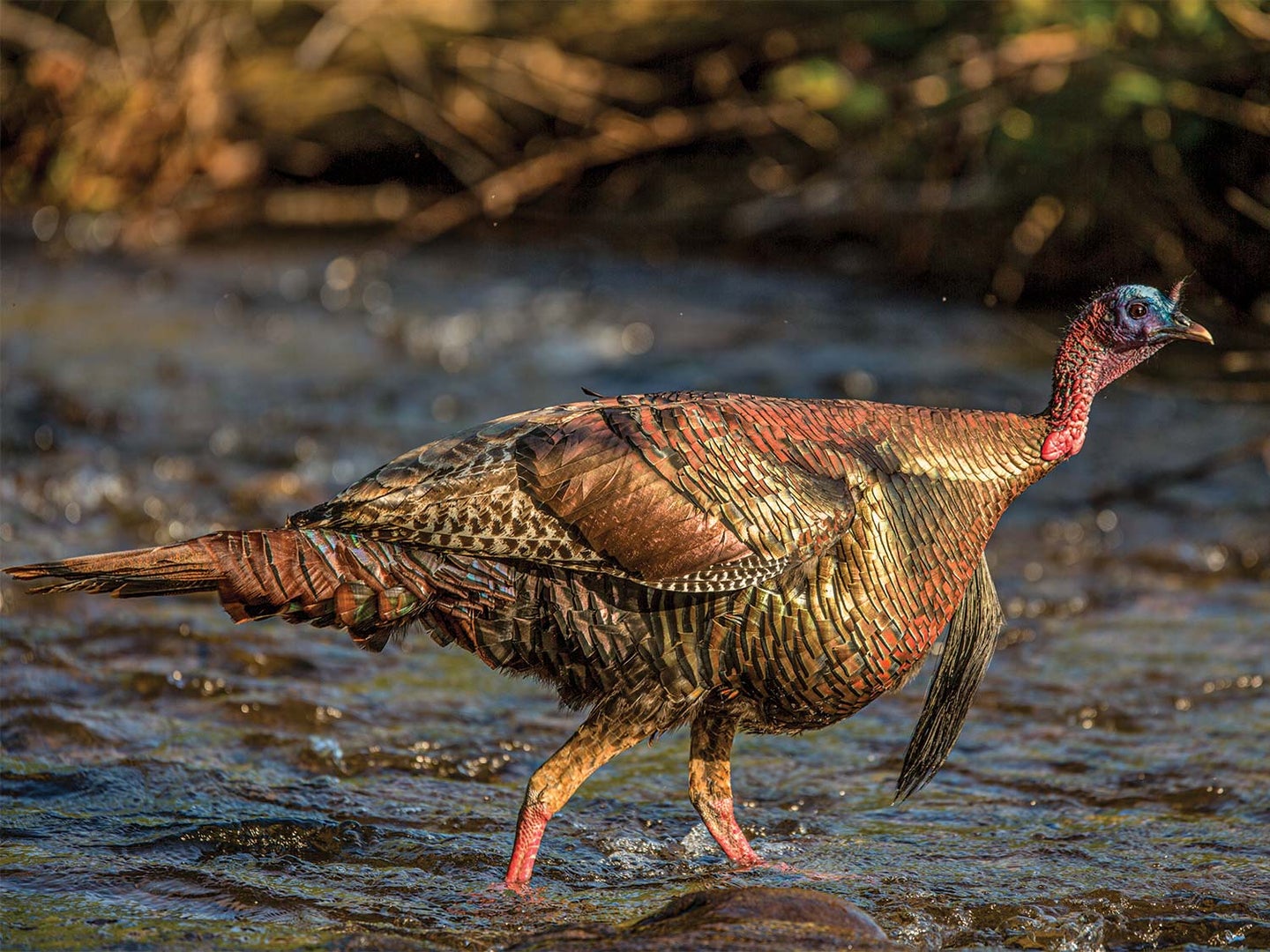 When he gobbled, the morning was as black as the inside of a crow. He was across the river from the boat ramp where my hunting partner Jill and I had just launched. We were hunting new ground, public land surrounding a picturesque river in Missouri that I’ll never name. We had been waiting for enough light to run downstream, but this tom’s early gobble changed our plan.

We let the current carry us downstream as he gobbled five more times. When we were within 150 yards, we quietly paddled to his side of the river. By now we had enough light to navigate without a flashlight, but we knew we couldn’t get much closer to him. And we didn’t need to.

We set up shoulder to shoulder 50 yards off the river. He gobbled hard at Jill’s first three yelps, then flew down our way, and I hit him hard with a cutt. Jill backed me up with some louder yelps. Two minutes later, she pulled the trigger.

Hunting turkeys on a river isn’t always that easy. The basics of turkey hunting remain the same, but here are a few boat-hunt tactics I’ve learned over four decades.

There’s a wide variety of boats that work for turkey hunting—anything from a kayak to a pontoon can get the job done. It all depends on the water you plan to hunt. On any of the large Army Corps of Engineers lakes, a bass boat is the best option because of its speed and seaworthiness. But pontoon boats and even houseboats work on big lakes, and you can usually rent them at a local marina.

On smaller rivers and streams, johnboats, canoes, and kayaks are the obvious choices. You’ll move slower using only paddle power, but it will be easier to hear the birds gobble if there’s no motor running. Borrow a page from the float-tripper’s book by launching at one access point and taking out at another farther downstream, to hit larger stretches of the river.

Multi-day float-hunts through national forests or state lands (see sidebar, opposite) allow you to cover even more untouched ground.

Before you hit the water, fire up a mapping program such as onX Hunt or HuntStand to locate land that would be hard to access on foot. Many rivers flow through or beside remote country that rarely sees landlubber turkey hunters.

Once you’ve got a general area in mind, zoom in and start identifying likely roost spots. Key in on ridges paralleling the waterway, steep-sided hollows dumping into the river basin, beaver ponds, or other flooded timber within hearing distance of the waterway. Once you find and mark these spots, you can move swiftly from one to the next, and eliminate a lot of unproductive territory during that crucial early roost-gobbling time.

Calling from a boat to locate turkeys is fine, but in most cases, it’s better to use standard locator calls (crow, owl, etc.) rather than hen talk. Occasionally, when hen calling from the boat, I’ve had the gobbler come to the shoreline, spot me floating by, and leave. Get to dry land before starting a conversation with a gobbler, and you’re more likely to have a successful encounter.

After you hear a gobbler from the boat, don’t worry too much about scaring him with your outboard (if you’re running one). River and lake birds hear boat traffic all the time. However, it’s not a good idea to motor to the bank right under your bird. Allow enough space to land without spooking the bird off the limb, then approach the gobbler on foot.

You can hear a long, long ways during a quiet morning on the water. This is one of the most beneficial aspects of boat hunting—you can cover more ground not just with the boat, but also with your ears.

This advantage is hard to overstate. One morning several years ago, while hunting the Osage River in west-central Missouri, Jill and I just barely heard a gobble downstream. We ran the boat closer, killed the outboard, and floated the last few hundred yards before climbing the ridge where the gobbler was sounding off. We failed to kill him, but later, I reviewed our hunt on a mapping program. When we first heard that turkey, he was more than 2 miles downriver.

Read Next: The 7 Reasons You’re Not Killing Turkeys on Public Land

Keep in mind that the birds can hear you too. You don’t want to be clanging gear around in the boat and hollering to your paddle partner on a dead-still morning. Keep the boat organized so you’re not fumbling to find gear in the dark, and communicate ahead of time with your partner about how you’re going to beach the boat and tie it up.

One disadvantage of boating is that you’ll always be at a lower elevation than the birds. It’s not impossible to call one downhill, but it is more difficult because it’s usually harder to see them coming. Overcome that disadvantage by getting level with or slightly above your gobbler before setting up to call him in.

Use your mapping app to quickly check the ­topography around the gobbler. Figure out the easiest approach—sometimes a longer walk through gentler terrain is better than a short sprint up a slope of blowdowns—and pick a likely opening to call the bird to.

One last turkey-killing nugget: Don’t quit too soon. That acoustic advantage doesn’t go away when the early gobbling fades after sunrise. If you don’t get anything going early, stay on the water. Revisit those likely roost sites you hit at first light and listen. If the action seems dead, pull out the fishing rods and do a little casting. A gobbler that might have had hens at first light could be all alone by midday. And when you finally hear him sound off, you better ditch the fishing rod fast because a lonely lunchtime tom will usually come charging in to a call.

This national wildlife refuge ranges from MN to IL, and has plenty of public hunting access.

Runs through the Huron-Manistee National Forest, and there are a ton of options for canoe rentals.

Boasts 126,000 acres of wildlife management areas between MS and AL. Be aware of the locks and big wakes from yachts.

Borders the Sherburne Complex Wildlife Management Area (44,000 acres) and is home to plenty of swamp gobblers.