Have you ever been chased, stalked and otherwise dominated by a wild turkey gobbler trying to fight you? Nope, me... 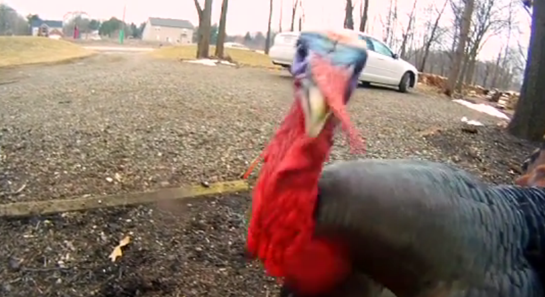 Have you ever been chased, stalked and otherwise dominated by a wild turkey gobbler trying to fight you? Nope, me neither. Edna Geisler of Michigan has. She calls the bird Godzilla. Godzilla’s roosting area? Nearby state land, which might be his downfall come the April 23 turkey season.

Reports (see the video here) say he’s spurred her. She jokes she’d like to take revenge by eating him. (Any serve-him-up volunteers?) She also seems to just want to get along with the dominance-minded longbeard – likely a two-year-old – but the bird won’t leave her be. Sure enough, Geisler seems a little conflicted and might be developing a love-hate relationship with the spring-crazed tom.

Poor woman. She’s afraid to go out of her house. According to news reports, she sneaks to the post office in the early morning to avoid the longbeard.

While the claim he runs 30-pounds-plus seems a little exaggerated to this longtime turkey hunter (maybe 20, sure), he is one big adult turkey looking for a fight. Would you go a few rounds with him on opening day? Maybe set up on nearby state land and do the deed? What should be done with this menace to poor Edna Geisler, Strut Zoners? Is it time to take his kind out of the gene pool?